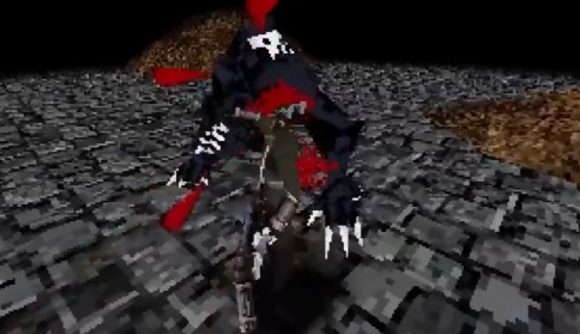 While we await news of a potential next-gen remaster and PC version of Bloodborne, someone’s been imagining a different kind of remake of the action-adventure game. A developer is turning From Software’s gothic Souls-like game into something for the original PlayStation.

The demake comes courtesy of developer Lilith Walther, who’s been toiling away on making Bloodborne look like a 3D horror game from circa 1997. She’s been sharing clips on Twitter of the project thus far, looking at various aspects of Bloodborne, and demonstrating the changes necessary to taking something that was cutting edge only a few years ago and making it fit on tech that’s nearly three decades old.

She isn’t the first to deconstruct Bloodborne this way, Yarntown from developer Max Mraz turned the open world game into a top-down Zelda-like, but Walther’s work has some interesting perspective to it. An obvious contrast is draw distance, that distinctive PlayStation fog is commonplace, making encounters that much more ominous. Visceral attacks do a set amount of damage, and you get a big R1 symbol when one’s available. Walther’s been doing regular threads on the features as she adds them, from save points to your hunter’s voice.

This is another in a long line of demakes that explore various games through different pallettes, mechanics, and genres. In addition to Yarntown, we’ve had Disco Elysium on the Game Boy, Deadly Premonition on the Game Boy, and Super Smash Bros on the NES.

This Bloodborne PSX dev thread starts with loading and a proper loading screen! Now that we’re hopping between levels I need to write a save and load system that passes data around for proper navigation 🧵 pic.twitter.com/MHhMC1ouUE

Walther is working on a JRPG called Witch, with Heartstrings Studios, due out 2022, and you can find more information on that here. We’re still holding out hope for that Bloodborne PC port, and these fan projects are making the anticipation a little easier.