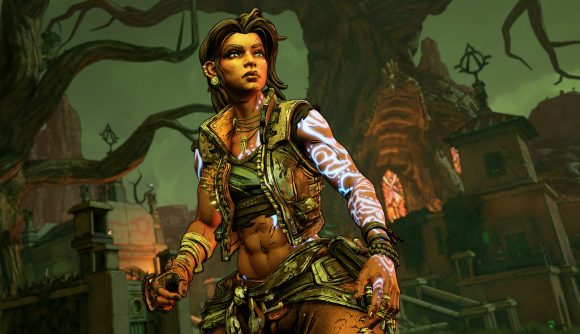 Now through November 5, the Epic Games Store is holding a special Halloween sale, slashing prices on a broad range of titles, including many current and former exclusives. Discounts of up to 75% are on offer for the spooky season, so now’s a good time to grab a game or two that you’ve been eyeing since launch.

We’ve picked out a couple of our favourite deals, but you can head to the sale page on the Epic Games Store to see the full selection. There are sales on strategy games, some notable multiplayer games, and of course on several FPS games as well. No matter how you prefer to celebrate Halloween, you’re sure to find something you like in the sale.

The Borderlands 3 base game is 50% off during the sale, bringing it down to $29.99 USD. The best deal may be on the Super Deluxe Edition of the game, however – it’s marked down 40% to $59.99, but it includes the pricey season pass that gives you access to four story campaign add-ons, each with a whole new storyline and new areas to explore (and of course, more guns). The Borderlands 3 Halloween event is going on now, and you can join right in on the fun.

Dark Souls fans will want to have a look at Mortal Shell, which launched in August and is now 20% off for the Halloween sale. The dark RPG game is also celebrating Halloween with its first content update, which adds ten new skins for your characters.

Here at PCGamesN, we’re also big fans of SnowRunner, an open world game about big, off-road trucks doing truck stuff. The base game is marked down 33% to $26.79, but you can get the premium edition that includes the season pass for 30% off, or $41.99.

If you’re saving money and don’t feel like subjecting yourself to the temptation of sales, you can always just pick up this week’s selection of free games from Epic – it’s a pair of very different games that are both perfect for the Halloween season.