Saving Private Ryan cast a long shadow over videogames, and only now – more than 20 years after Spielberg’s film debuted – are games finally finding their way out of its desaturated vision of the Normandy landings. Call of Duty: Vanguard – which you can buy here – is the sixth game in the long-running FPS series to be set in the Second World War, but it’s the first that feels like it’s doing its own thing. Vanguard takes a couple wild swings that don’t pan out all that well, and plays it perhaps too safe in other areas. The overall effect, however, is that Sledgehammer has managed to make WWII, as a setting, feel fresh again – and thank goodness.

Let’s pause momentarily to marvel at what a profoundly strange thing Call of Duty is in the year 2021. “I’m going to go play Call of Duty” has long since become a meaningless phrase, since ‘Call of Duty’ is a label that’s been smeared out across a startling array of different experiences, which now all somehow plug into the massive, shared world of Call of Duty: Warzone. It’s an alternate dimension with its own timeline and history, a metaverse made up of caffeine- and sugar-infused hyperviolence. Zombies roam the land and Cold War-era spies try to stop the nuclear apocalypse, while everyone else is busy murdering each other forever and ever.

It’s Warzone’s madcap goofiness, more than any Ken Burns-style documentary footage, that informs Vanguard’s pulpy campaign. The “birth of the Special Forces” stuff that Activision has been hinting at in the leadup to Vanguard’s release is mostly nonsense: this is a comic book origin story for a team of commandos who would’ve been at home alongside Clint Eastwood in Where Eagles Dare.

The story begins on a train outside Hamburg in the closing hours of the war in Europe. The Red Army is approaching Berlin, and British paratrooper Arthur Kingsley has been sent with a hand-picked team of hardasses to swipe some super-secret Nazi plan called Operation Phoenix out of a sub pen. This all goes disastrously wrong, and the whole gang winds up in a cell beneath the Gestapo headquarters in Berlin, where they’re interrogated one by one by a weaselly Nazi officer named Jannick Richter (played by an unnervingly restrained Dominic Monaghan). 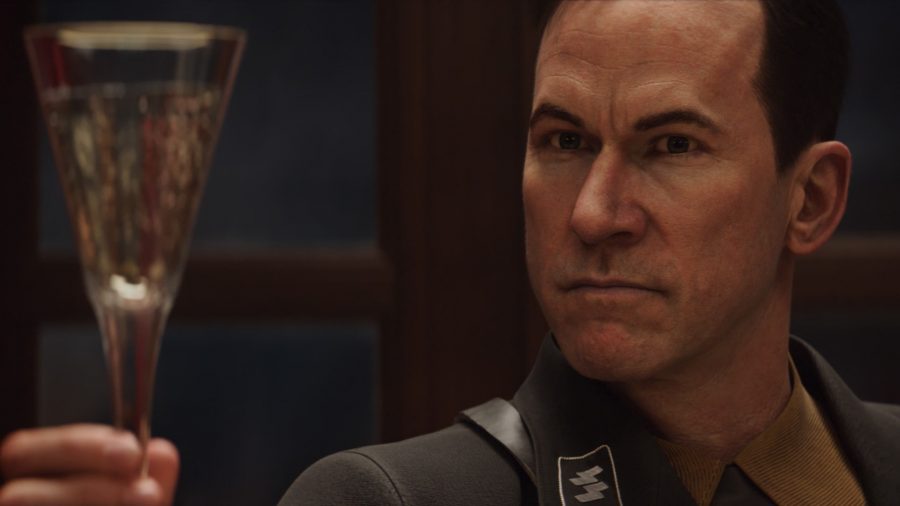 Their sessions with Richter provide the jumping-off points for introductory stories for each character. Arthur’s begins with an airborne drop into Merville on D-Day, which culminates in a thrilling assault on a complex of coastal artillery. Next we travel to Stalingrad for some backstory on Polina Petrova, the group’s steely Russian sniper who’s out for revenge. We get to know Wade Jackson on the deck of a carrier during the Battle of Midway, and Aussie explosives expert Lucas Riggs shows up in North Africa just before the Battle of El Alamein.

For a variety of reasons that are understandable without being at all laudable, games tend to chicken out when portraying Nazis. Videogame Nazis usually are bad because they enjoy gloating while they torture prisoners, or because they’re into evil occult stuff like reanimating the dead (more on that later). While Vanguard steers clear of any explicit discussion of the Holocaust, Sledgehammer’s writers deserve credit for actually showing that their villains are disgusting racists. This isn’t subtle or shoehorned in: both Richter and his menacing boss express open contempt for Arthur’s ethnicity, and Richter even brags to him in the interrogation room about Hitler’s personal recommendation of a book by American eugenicist and white supremacist Madison Grant, The Passing of the Great Race.

The missions themselves are, in the main, some of the best in recent memory. Most are lengthy adventures that have multiple phases and pass through different environments, sometimes beginning with a quiet stealthy sequence before cranking up the volume and having you go loud alongside a full platoon of fellow soldiers. It fizzles out in places where its reach exceeds Call of Duty’s traditional grasp. An aerial dogfighting sequence at Midway feels more like a battle with my mouse than air combat, while a boss fight in which I have to sneak attack a heavily armed character in a maze of dusty rooms has me checking my watch rather than creeping toward the edge of my seat. 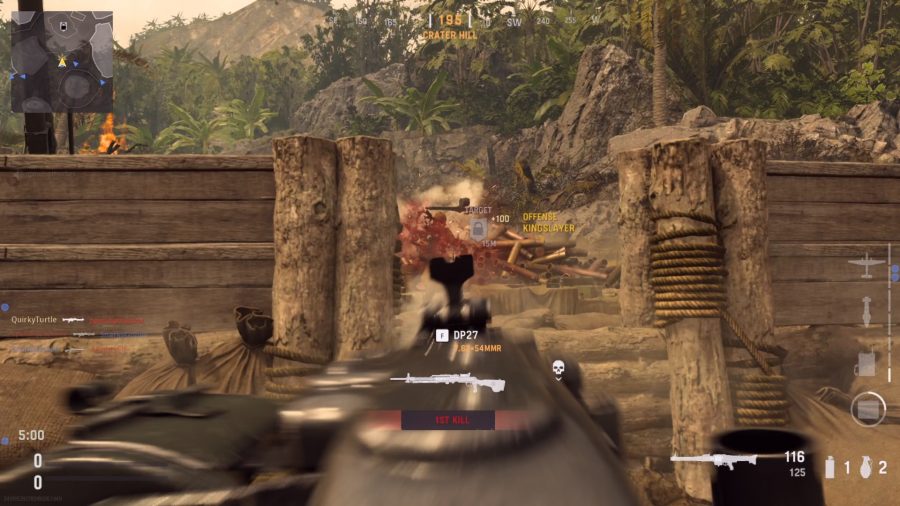 These are just blips on the path of a rollicking campaign that left me wanting more for the first time in years. As usual, it’s brief, and the way it wraps up suggests the biggest adventures for the team are yet to come. Sledgehammer has foregone some of the technical whiz-bang stuff, like RTX-powered ray-traced lighting, and characters’ faces look a bit softer than they did in Black Ops – Cold War and Modern Warfare. Gone too is the aggressive suspicion and cold-heartedness; Vanguard’s cast have much warmer personalities and are easy to root for.

They each have special abilities that can be used at certain points in the campaign. These range from Arthur’s ‘command’ that allows him to direct allies’ fire at half-track turrets and machine gun nests, to Wade’s ‘focus,’ which – hilariously – is essentially a temporary aimbot that allows him to slow down the action and auto-kill enemy troops en masse.

Vanguard adds some interesting new modes to multiplayer, too. Patrol Zone has a single capture point that moves in a track around the map, which keeps the fighting fresh throughout. Activision tells us that Gunfight will return eventually, but for now it’s replaced with Champion Hill. Here, teams of two or three face off in a round robin of Gunfight-like timed matches, with each death counting against a team’s pool of lives. Rather than a random loadout, teams periodically get a buy round in which they can spend currency they’ve collected on new gear and upgrades. 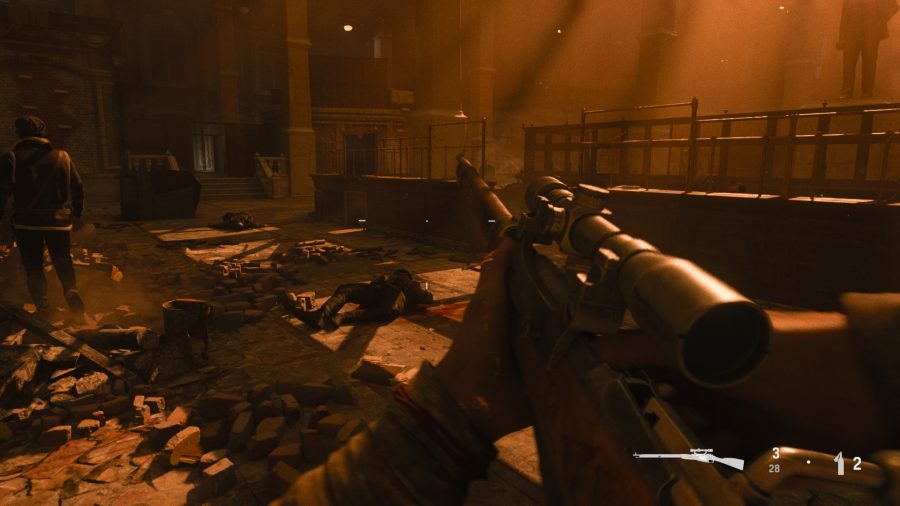 Most of the complex scaffolding surrounding multiplayer will be instantly familiar to anyone who’s played the latest Modern Warfare or Black Ops – Cold War. There’s the usual array of unlockable assault rifles, SMGs, light machine guns, sniper rifles, and DMRs, with some oddities thrown into the mix to keep things interesting. 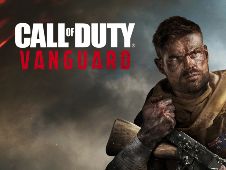 The gunsmith allows you to customise each primary weapon with up to ten attachments, which can result in some real monstrosities. The new gimmicky Einhorn shotgun features a revolving cylinder, but it can be modified to accept a selection of quick-swap magazines, for example, which appear to feed directly into the cylinder. You can add powerful optics to Thompson and Owen guns if you’re so inclined. These combinations may not be particularly useful, but they’re certain to be prime fodder for goofy YouTube videos.

For me, Vanguard’s biggest surprise is its Zombies mode. In Der Anfang, Treyarch returns to Zombies and strips it back considerably, tightening the action loops and making it much more digestible than it’s been in the past few Call of Duty games. Here, you’ll begin in a small fountain square in a haunted Stalingrad, then venture through portals to engage in some light objective-based zombie-blasting for a couple short minutes. Once you’re done, you and your team will warp back to the square, where you’ll clear out some more enemies and explore newly opened spaces while you upgrade your weapons at the Pack-A-Punch machine and drink from demonic chalices to boost stats like reload speed and critical damage. 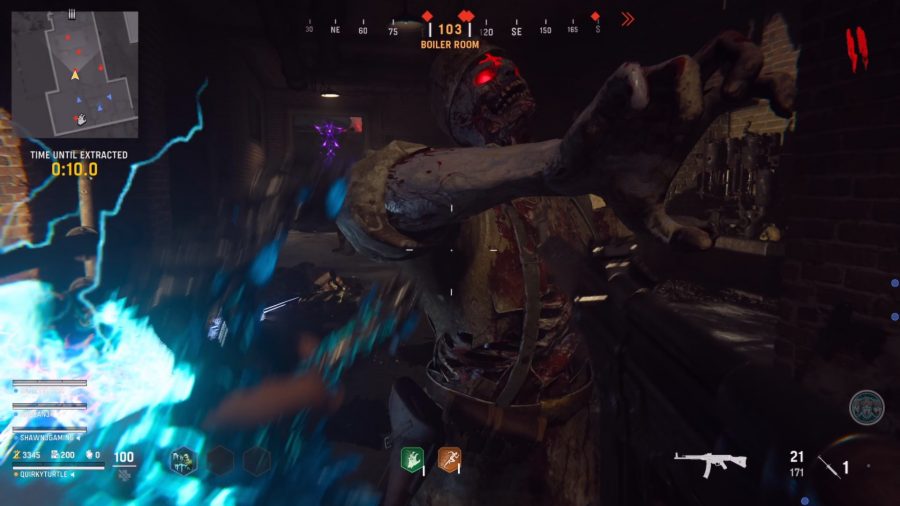 Der Anfang is still pretty mechanics-heavy on paper, but it’s handled deftly enough that I never felt as though I was dragging my team down by not knowing all the rules. You’ll need a majority of the team to accept a mission before venturing through a new portal, and you can opt to exfil at any time after you’ve completed five of them. It’s fast-paced, breezy fun at first, but the difficulty ramps up quickly once you’ve finished the initial rounds.

Der Anfang is fast-paced, breezy fun at first, but the difficulty ramps up quickly

Der Anfang is billed as a ‘franchise first’ for having a tie-in with the main campaign. While that oversells the brief throwaway mention Project Aether gets during a cutscene, the fact that this World War II setting is of a piece with the B-movie horror of the zombies mode is at the heart of what makes Vanguard work as well as it does.

The reverential, Americana-drenched tones of Saving Private Ryan and Band of Brothers simply aren’t a good fit for Call of Duty’s core strengths, and Vanguard seems to be a conscious acknowledgement of this fact. Vanguard’s rip-roaring sensibilities could hardly be more distinct from the slavishly derivative Call of Duty: WWII, and that shift makes it a far more entertaining experience from start to finish. 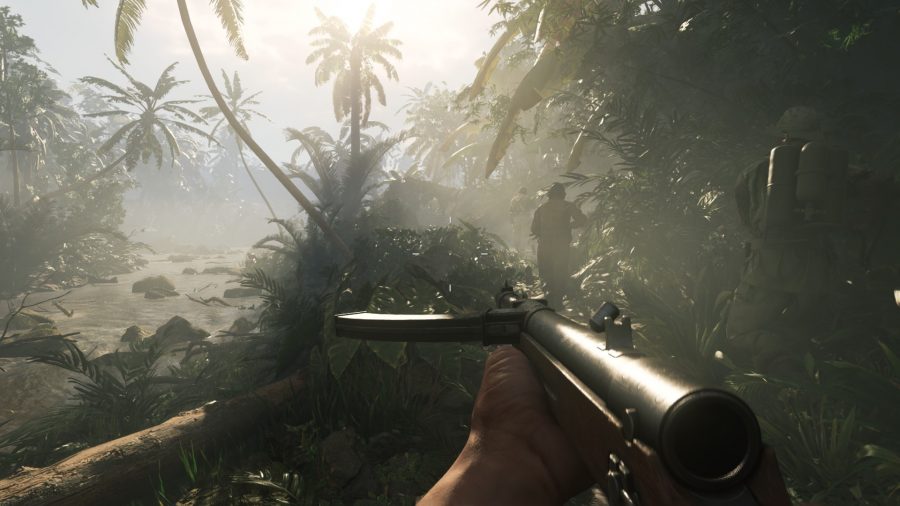 Much remains to be seen, of course. It’s impossible to know how Vanguard will affect the larger Call of Duty ecosystem: the new Pacific map for Warzone launches with the new Season One in December, the map pool will grow from 20 to 24 by the end of the year (with Shipment making its return November 17, and three new multiplayer maps arriving alongside Season One). New battle passes will introduce new Vanguard guns, which inevitably will be temporarily overpowered, and there’s bound to be a new mystery to uncover on Caldera once it replaces Verdansk ’84.

In the meantime, though, Call of Duty: Vanguard is probably the most entertaining entry in the latest triptych (which now share a unified launch screen alongside Warzone). There aren’t many surprises to be found if you’ve already played Modern Warfare or Black Ops – Cold War, but if I were to recommend just one of the three, it would unquestionably be Vanguard.

Opting for pulp fantasy over Spielbergian reverence for the era, Vanguard reinvigorates the World War II setting and charts a new path forward.