Hunting for the best Whitley loadout in Warzone Pacific? After a short delay to address some of the bugs plaguing Caldera, Call of Duty Vanguard and Warzone Season 2 is finally here. The new season is spicing things up by introducing Nebula V, a powerful chemical substance that can be used as ammo or as an explosive device. This sounds deadly when paired up with the Whitley LMG or the KG M40 as rival players won’t be able to resurrect their fallen squad members.

Warzone Pacific is also adding two mechanics that battle royale game fans may be familiar with. The first is the redeploy balloons scattered around Caldera, allowing squads to reposition themselves across great distances in less than a minute. The second is a Portable Decontamination Stations (P.D.S.) which temporarily creates a zone which the circle collapse gas cannot break through.

We already know how deadly the best Bren loadout can be in the right hands, and it looks like the Whitley could go toe-to-toe with one of the best LMGs in Warzone. The base version of the Whitley features the highest damage per shot in its category – with some tweaks to the attachments, we’ll be able to turn this into a deadly weapon. Here’s what you need to build the best Whitley loadout in Warzone Pacific.

The best Call of Duty Warzone Pacific Whitley loadout is:

Our goal with this Whitley loadout is to reduce the recoil without hurting the LMG’s strengths, mainly its damage output. The G28 Compensator suits the Whitley as it enhances the weapon’s recoil control without introducing any negative effects. The majority of the barrels for this gun hurt key areas for us, so it’s better to stick with something reliable here.

Next up, we have the 28” Gracey Mk. 9 barrel which is great for long range encounters as it upgrades the Whitley’s bullet velocity, range, and accuracy. This attachment does hurt the gun’s mobility with nerfs to movement speed and sprint to fire time, but your mobility won’t feel any worse compared to other LMGs in Warzone Pacific.

Now that we’ve improved the Whitley’s damage range and bullet velocity, it makes sense to use a scope like the G16 2.5x optic. We can commit fully to the Whitley becoming a medium range weapon with the CGC R4 stock – this attachment boosts the recoil control, movement speed, and accuracy by limiting the gun’s ability at close range. The M1941 Hand Stop hurts the close range capabilities of this weapon, but the improvements to the recoil control and accuracy are too good to pass up.

Though the .30-06 120 Round Boxes magazines look like they hurt the weapon’s mobility, the effect doesn’t seem to have a huge impact in-game. With 120 bullets in each clip, go for the FMJ Rounds to damage enemies hiding behind surfaces. The Stippled Grip also works well in this build as it boosts the gun’s recoil recovery and initial firing recoil without any downsides.

For the weapon perks, we recommend picking Hardscope to gain increased accuracy while aiming down sights for an extended period of time, and Fully Loaded for additional starting ammo. 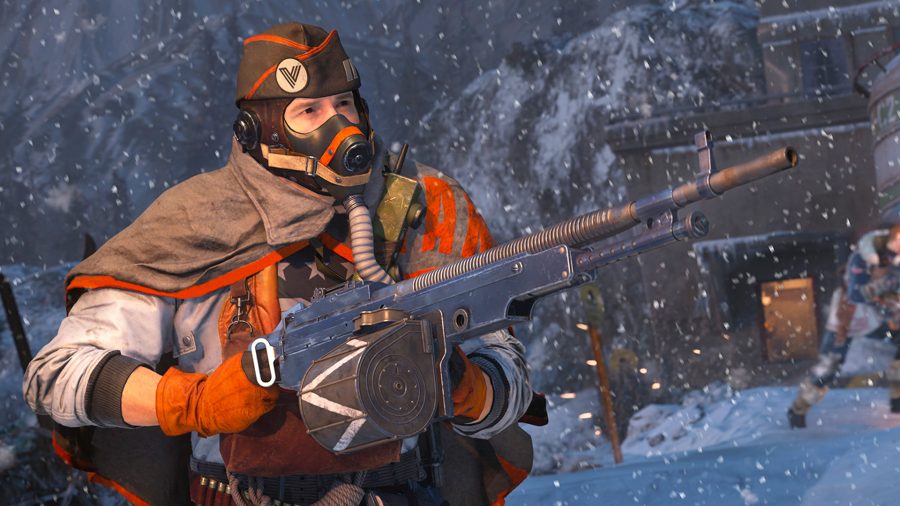 HOW TO UNLOCK THE WHITLEY IN WARZONE PACIFIC

Just like the KG M40, the Whitley is included in the free battle pass in Call of Duty Vanguard and Warzone Pacific. To unlock the Whitley, all you have to do is reach tier 31 in the Season 2 battle pass. The free weapons are typically unlocked by reaching tier 1 or tier 31. You can speed the progress up by purchasing the battle pass bundle which skips 20 tiers for 2,400 CoD points.

That’s all you need to build the best Whitley loadout in Warzone Pacific. Will the Whitley have enough power to break into our best Warzone guns list? If it follows the same path as Season 1’s Welgun and Cooper Carbine, there’s a good chance it’s going to dominate the meta.