Goodness gracious, doesn’t time fly? It’s Christmas! That day when people give each other gifts, scoff way too much food in one sitting, and nap in front of a cosy fire or sun themselves on the beach, depending on which hemisphere they live in. Many games celebrate Christmas by having winter-themed events, such as Fortnite’s Winterfest (complete with Fortnite presents you can open up right now), Destiny 2’s Dawning, and Call of Duty: Warzone’s ‘festive fervour’. Even newcomers such as Halo Infinite are getting in on the holiday havoc with its Winter Contingency event.

Wholesome as it all is, we still yearn for the halcyon days when developers themed entire games for the holiday season. Among the best-known examples is Christmas Lemmings – a set of special holiday-themed levels which saw the green-haired critters sporting dashing Santa hats. This kind of spin-off is distinct from games based on real Christmas from the ground up, which also exist and are mostly rather trite (but not the best Christmas games, of course).

Last year, we put a list together of Christmas 2020 spin-off games, complete with some cursed photoshop edits. It was so much fun popping a KFC bucket in Cyberpunk 2077 and an Among Us bean-person into Die Hard that I thought of some holiday-themed candidates for 2021’s releases. It’s also perfect speculative fodder for our regular feature series, What If, which we started this year.

Finding games from 2021 that are decent candidates, though, is tricky. That’s not to say there haven’t been any good games this year, but we want to do more than just add some festive bunting to Deathloop’s Updaam or dress Razputin Aquato in a Santa hat. No, we want to focus on more inspired holiday-themed gameplay tweaks, and though it took some thinking, we did eventually come up with five ideas. Here are some of the best new PC games of 2021, reimagined with a Christmas theme. 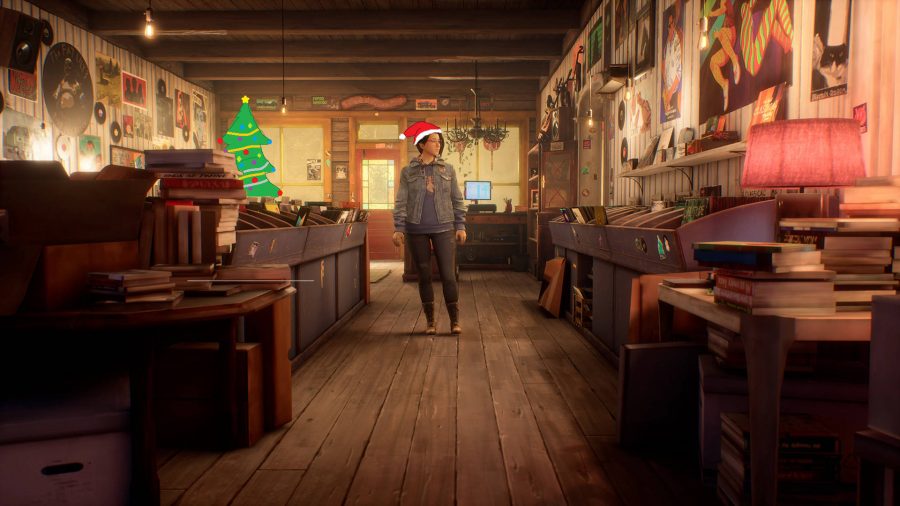 This first idea comes with spoiler warnings for Life is Strange: True Colors: to make this work, we need to assume that the canonical ending for the game has Alex stay in Haven Springs and for the town to believe her completely.

If you’ve not played Life is Strange: True Colors, go and read our review as a lot of what I’m about to say will make more sense if you do. Alex’s power to read the emotions of others is a powerful ability that presents players with a conundrum: should Alex intervene, or would doing nothing be the best course of action?

In this side story, set during the first Christmas after Alex settles into Haven Springs, she wants to thank everyone for believing in her by getting them the best possible gift. It’s a bit like that scene at the record store when she tries to work out which vinyl her brother wants, only she’s doing it for the entire town and with fully realised powers. It doesn’t just have to be physical items; a thoughtful gesture, such as volunteering to look after the flower shop while Eleanor spends time with her daughter or sharing a beer with Duckie at the bar, can also be a valuable gift. 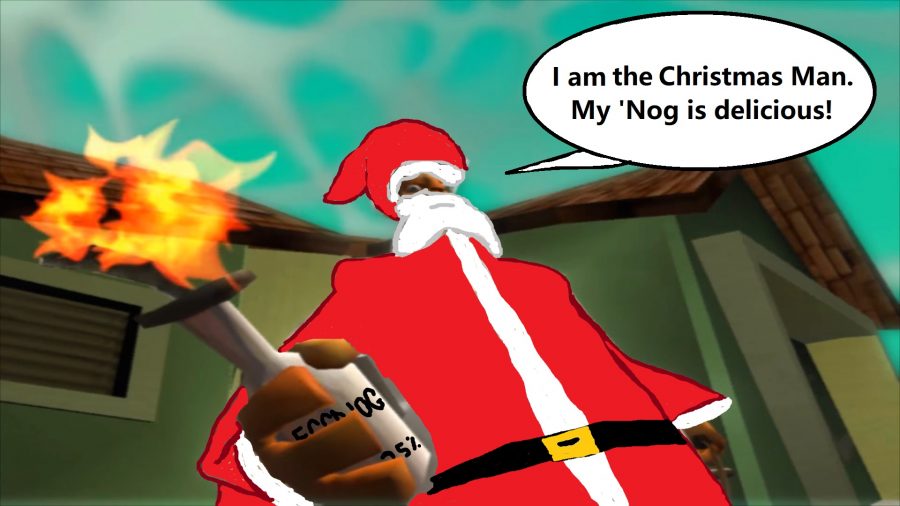 One of the most memorable levels from the first Psychonauts is the mind of Boyd Cooper, who in his delusional state thinks he’s The Milkman, a mysterious figure at the heart of the level’s espionage-themed plot. Taking place in a warped suburban street, Raz must don disguises to get past secret agents, and revive the Milkman to give Boyd his confidence back.

Sadly, Boyd isn’t in Psychonauts 2 (check out our review here). We also don’t see any of Boyd’s extended family. So let’s fix that and imagine that Boyd Cooper has an identical twin. His name is Lloyd, and he also has an alter ego: The Christmas Man. In his level we return to the same suburban street, except this time it’s covered in snow and lined with billboards featuring Lloyd’s face in an ill-fitting mall Santa costume.

The overall goal is to deliver presents for The Christmas Man because he’s paranoid that someone is out to get him. Secret agents return too, but here they’re dressed in cheap elf and reindeer costumes that Raz must also wear if he stands a chance of avoiding them. 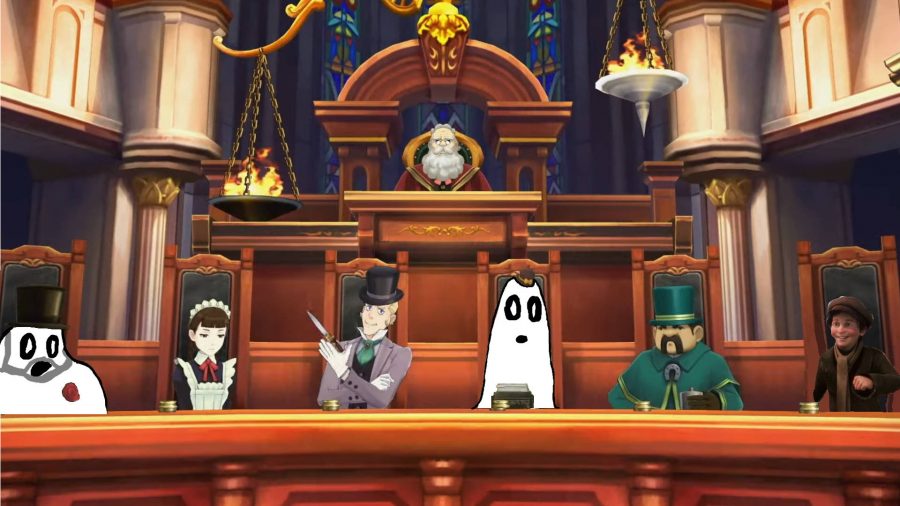 The Great Ace Attorney Chronicles – The Haunting of the Festive Spirits

I’m counting this duology as an eligible game because the official localisation came out this year, and because its Victorian setting provides the perfect opportunity to tackle perhaps the most famous Christmas story of them all.

Ryunosuke’s latest client is none other than Ebenezer Scrooge, a man accused of the murder of his business partner Jacob Marley. He is, of course, innocent of the dastardly deed, but just as he is in Dickens’ novella, he’s a nasty piece of work, obsessed with making money and without an ounce of empathy in his heart.

The case should follow the plot of Charles Dickens’ story but take liberties with the source material. While Scrooge is in the dock, Ryunosuke faces character witnesses such as Scrooge’s employee, Bob Cratchit. The jurors include Tiny Tim, a mix of regular Londoners, and two of the three ghosts. Why two? That’s because the Prosecution leader is the ‘Ghost of Christmas Yet to Come’. 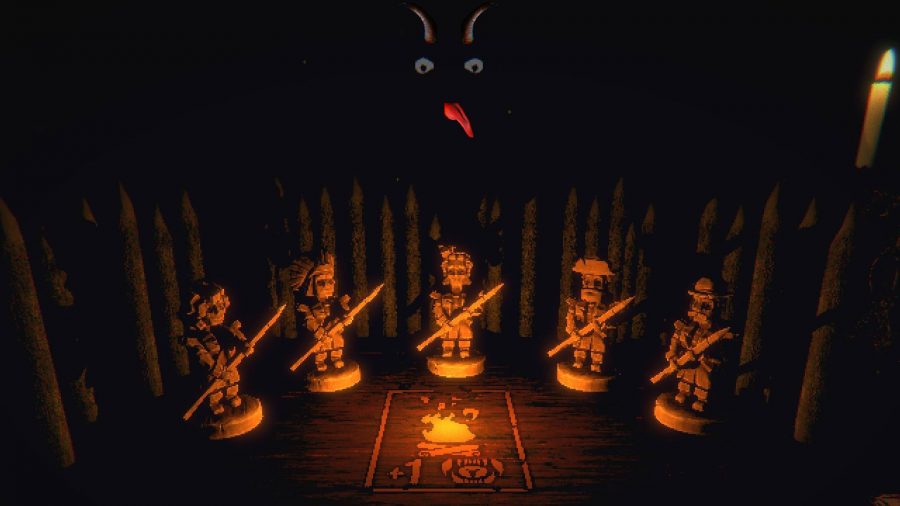 Maybe this is a bit of a stretch; Inscryption is a complete experience of the kind that normally doesn’t lend itself to expansions. However, options suddenly open up thanks to the recent endless mode. Oh, and once again this comes with a spoiler warning.

Before I found out that the woodland hermit obsessed with taking photos is named Leshy, I wondered if it might be the Krampus: an anthropomorphic horned creature in Alpine folklore who visits children in early December. Nice children get relatively modest gifts like fruit, nuts, and chocolate, but more often than not, depictions of the Krampus show him scaring naughty kids. Leshy’s design is similar to the more monstrous modern interpretations of Krampus, so it’s a natural fit.

Since it’s a card game, all that would need to change – aside from Leshy turning into the Krampus – are the cards themselves. Lots of the animals in Inscryption would fit an Alpine setting, but you could easily add some new, Christmas-themed ones too for that extra festive spice. Toy-throwing elf? Drunken red-nosed reindeer? Voracious Yule Cat? The possibilities are limitless. Up to a limit of probably a couple of dozen; let’s be honest, it’s not that rich. 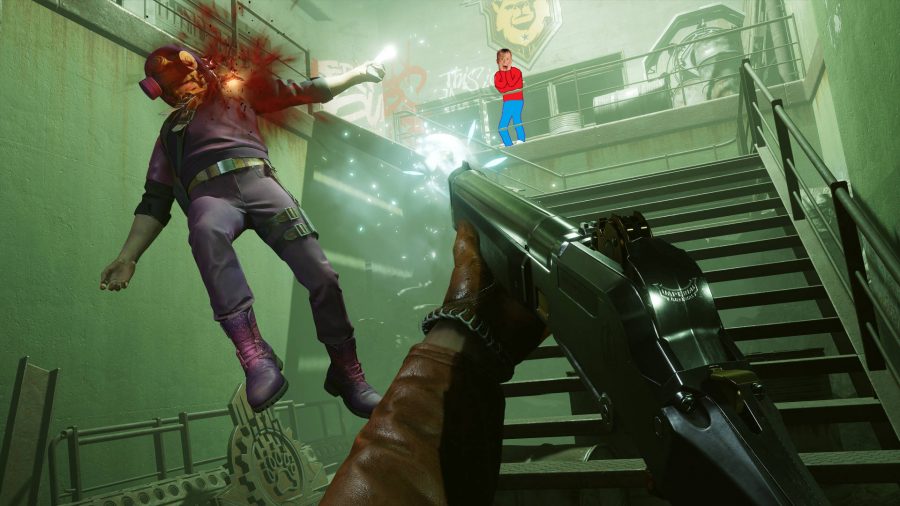 What if Deathloop, but Home Alone?

When it comes to putting Christmas themes in games, there are few better sources of inspiration than Christmas movies. Of course, you have the classics: It’s A Wonderful Life, Muppets’ Christmas Carol, Die Hard. But there’s more untapped potential out there, and I think I might have the best Christmas multiplayer idea ever, and it just so happens to be for our Game of the Year 2021 winner.

What if Deathloop’s multiplayer has a mode set in the Home Alone house?

It’s tough to sum up Deathloop in one sentence and do it justice, so you can check out our review to learn more about it. I like to think of it as a game about executing a heist while another person tries to kill you. It’s brilliant, but if I have a gripe, it’s that the maps are too big. So why not set it in one house? You can have Julianna in place of Kevin McAllister, setting up traps to thwart the efforts of Colt, who takes the role of the two bumbling robbers.

There are two ways to go from here. Maybe there’s something in the house that Colt needs as part of his plan to escape the loop, changing the ending slightly to give it a more festive feel. Or you could change the formula and have Julianna stuck in a time loop, so if she fails to fend off the invading player, her day restarts. Either way, with advances in modern technology, it’s about time for a decent Home Alone-like mode, and with its many powers, weapons, and overlapping systems, Deathloop is the best fit in 2021.

This has been a bit of a naff year for lots of people, so I sincerely hope that these silly ideas gave you a giggle, or maybe wonder which other games in 2021 could get the festive treatment. There are tons of exciting games coming next year, so here’s hoping that 2022 treats us all significantly better.