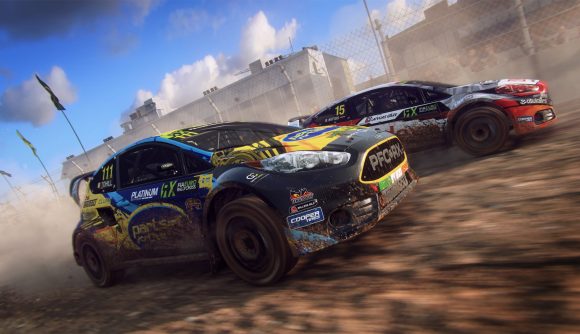 After a bidding war with GTA publisher Take-Two Interactive at the end of 2020, EA wound up walking away with Dirt and F1 developer Codemasters in a deal worth around $1.2 billion USD. Now, EA says it plans to expand the EA Sports portfolio, leveraging the talent it acquired with Codemasters to develop annual racing games.

The acquisition of Codemasters creates “a global leader in racing entertainment,” EA says in slides distributed to shareholders ahead of its quarterly earnings call today. Having Codemasters in its stable of studios “will enable EA to release new racing experiences annually” which is a “natural fit” with “clear opportunities with [the] EA Sports portfolio.”

EA also plans to continue supporting Codemasters’ existing catalogue of racing games by providing access to “EA’s technology, central services, and 330M-strong player network – effectively expanding Codemasters’ total addressable market.” The “cross-fertilization of ideas” possible with Codemasters and EA’s existing racing development teams “will improve and accelerate development and innovation” – in other words, sharing ideas means nobody has to reinvent the wheel, as it were.

Prior to acquiring Codemasters, EA owned the licenses for the Need for Speed and Burnout franchises. Codemasters brings with it Dirt, Dirt Rally, Grid, and Project Cars, as well as experience working on licensed games with Formula One and World Rally Championship.

Codemasters’ most recent game is Dirt 5, which launched late last year to positive reviews. It’ll be interesting to see how its more technical racers, such as the F1 series and Dirt Rally, fare alongside the fan-friendly titles in the EA Sports lineup, like FIFA and Madden.