As is becoming tradition EA is kicking off E3 the Saturday ahead of the show with EA Play in Hollywood.

The show kicks off with a dive into Battlefield V’s multiplayer and War Stories. We’re told the campaign vignettes will look at “real and relatable people.” We new about a campaign following a woman in the Norwegian resistance, but it also looks like we might play as a British fighter pilot who crashes in the mountains.

The big news, though, was that there will be a Battlefield V battle royale mode. This is no great surprise, every game seems to be getting a battle royale mode these days. It won’t be shown off until later this year, unfortunately (maybe a sign that it’s been a last-minute addition?).

To keep on top of everything that’s happening at this year, have a read of our E3 2018 hub page.

The stream moves on to FIFA 19 next. It’s sometimes easy to forget that one of EA’s biggest money spinners has nothing to do with guns, war, or robots. The big news is that this year’s game fill have FIFA UEFA Champion’s League. Available in the regular campaign, building to the Champions League will also be the focus of the FIFA 19 Journey Mode.

EA CEO Andrew Wilson takes the stage next. He’s talking a lot about streaming and how it’s shaking up the consumption of media. It turns out EA has been working on an HD streaming service to open up its entire library as a subscription service – Origin Access Premier. There is an Origin Access free trial over this coming weekend but there isn’t yet a release date for the Premier streaming service. This is pretty big – it also brought the news thatMadden 19 will be coming to PC.

Andrea Rene, this year’s conference host, goes out into the crowd and finds Vince Zampella, one of the co-founders of Titanfall developer Respawn Entertainment. Titanfall 3? No, it’s something else, the name of Respawn’s Star Wars game – Star Wars Jedi: Fallen Order. Set in the dark times of the Star Wars universe it… well, that’s all Vince was willing to say. Still, with Respawn leading development it is most likely going to be a shooter.

Keeping with the Star Wars theme, the next announcement was that Star Wars: Battlefront 2 – Clone Wars will be the next major update, and bringing with it the heroes you would expect – Obi Wan Kenobi – and villains, too – such as Christopher Lee’s Count Dooku.

Then, as far from Star Wars as you can get, it’s gaming’s favourite anthropomorphic ball of wool – Yarny. Yup, there’s an Unravel 2, and it brings with it co-op. You and a friend can play as red and blue Yarnys, solving puzzles together. The big surprise: it’s out right now.

Head over to Origin and you can pick up the sequel today.

EA has made featuring indie developers a part of its shows for the past three years. Unravel was first, and since then there has been A Way Out (the developers of which Patrick Soderland tells us has moved into a new studio – suggesting the team might be working on something new for EA), and Fe. The latest EA Original is a beautiful, disturbing game called Sea of Solitude.

And for another change of pace, from the story of pain and growth in Sea of Solitude, we go to Madden 19 and hear how someone skipped their graduation to chase money. This will be the first Madden on PC in a while, and like FIFA before it, will have a Journey mode with its single-player story.

We can have a bit of a break, the next game is a mobile game… Wait, that’s a Hand of Nod! This is Command & Conquer. No, my sweet strategy game, what have they done to you?

Command & Conquer: Rivals looks like the future of the series. One thing we can take from this is that the series isn’t dead in EA’s mind but this isn’t way I’d like to play it. Hopefully there are larger plans in the works.

Let’s wash that away with a deep dive into Anthem. We know from a leak earlier this evening that Anthem’s release date is February 22. We’re told that the world will shift and change over time, it is a live game that updates will alter – locations will be destroyed, will grow. Anthem multiplayer/single-player is split, so when you are in your base you explore it on your own but when you go out into the world on missions you can join up with other players.

There are four classes of suits – the Ranger, the Storm, the Colossus, and the Interceptor – each has a different set of abilities and specialisms, but you aren’t locked into choosing just one. You will have access to all four suits (though, you may not be able to switch between them within a mission). 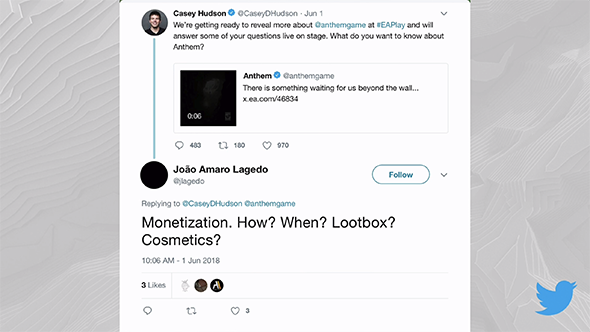 No, we’re told Anthem will not have loot boxes. It will have microtransactions but you will know what it is you’re buying at all times. I agree with the host here, I’m glad this means I can buy a pink suit and not have to rush through loot boxes to get it.

The interviews are wrapping up and we’re getting onto the good stuff – co-op gameplay.

Scars, one of your enemy’s in Anthem, have set up a posion weapon that threatens the city so the freelancers have to go out and destroy it. Immediate impressions is we’re going to play the hell ouf of this game. All the players are jetting about a gloriously rich, organic world. Each of the mechs has a distinct silhouette and a spread of punchy weapons and just look at the numbers pour out of those enemies?! This is going to be making Destiny and The Divison 2‘s developers a little bit worried.

That’s it for EA Play this year. We’ve a whole team of people at the show so we will be getting impressions and news from all of EA’s demos in the coming days. Catch you tomorrow for Microsoft and Bethesda’s streams. They should be good ones.