When is The Division 2’s release date? The Division 2 is well on its way, kick starting months of speculation in the run-up to its early 2019 launch. The official reveal of the game was short and sweet; there was some stage banter between a group of four playing the game, as well as a brief introductory trailer detailing how America began to rebuild in the wake of the deadly virus that caused the events of The Division.

The previous game already stole inordinate amounts of our time as we battled through the ravaged streets of New York, and The Division 2 looks like it’s going to do the same all over again. We enjoyed sinking lead into the first game’s many big bads and double-crossing our friends in the infamous Dark Zone, and we’re ready for more.

Despite the brevity of the reveal announcements, it disclosed enough information to allow us to start piecing together the game’s key details – now we know much more about The Division 2’s setting, new specialisations, and the much stronger endgame. Here’s our guide to everything you need to know about The Division 2.

The Division 2’s release date means we’ll be going to post-apocalyptic Washington DC on March 15, 2019. However, if you have bought any of the premium editions then you can play The Division 2 three days early on March 12, 2019.

Ubisoft does not keep its hype trains running as long as it once did – Watch Dogs 2 was announced at E3 2016 and released later that same year. By contrast, the original Watch Dogs took two years to launch after its debut announcement, and there was an almost three year wait for The Division.

As we’re closing in on the March 15 release date we now also have the global The Division 2 release times for all versions of the game:

Want to know the EXACT time you can log in and play your copy of #TheDivision2? These easy to understand images will help!

There are two The Division 2 trailers, and one of them is the cinematic footage above. Giving us a feel for the nightmare that is post-apocalypse America, we see what appears to be an idyllic community fenced off against a hellish lawless outside. We can assume most of The Division’s US reflects the latter, and your team of agents are sorely needed.

The other The Division 2 trailer give us a glimpse of the upcoming shooter’s gameplay. In it we see a four-player squad of agents taking on a side mission, and coordinating as they assault an enemy position.

Finally we have a story trailer for The Division 2, which introduces us to some of the enemy factions you’ll face in post-apocalyptic Washington, D.C. and sets the tone for the game. Give it a watch below.

The trailer also seemed to show gameplay around the United States Botanic Garden, before we see a squad of players head towards Capitol Hill in an attempt to take back the city.

With those landmarks in mind, it’s pretty likely you’ll be visiting places like The Washington Monument, as well as the bunkers that exist under the city to protect military and political personnel. There’s even a mission set around the wreck of what looks to be Air Force One.

It’s also worth noting that while the first Division game took place in winter, the setting of The Division 2 brings the game to the following summer, six months after the events of the first game, and around seven months after the outbreak of the virus that caused the downfall of America in the first place.

Finally, the ERSB rating for The Division 2 reveals that there is a lot of emphasis on a fictional drug called Spice, with drug labs, drug paraphernalia, and drug kitchens dotted around the city. 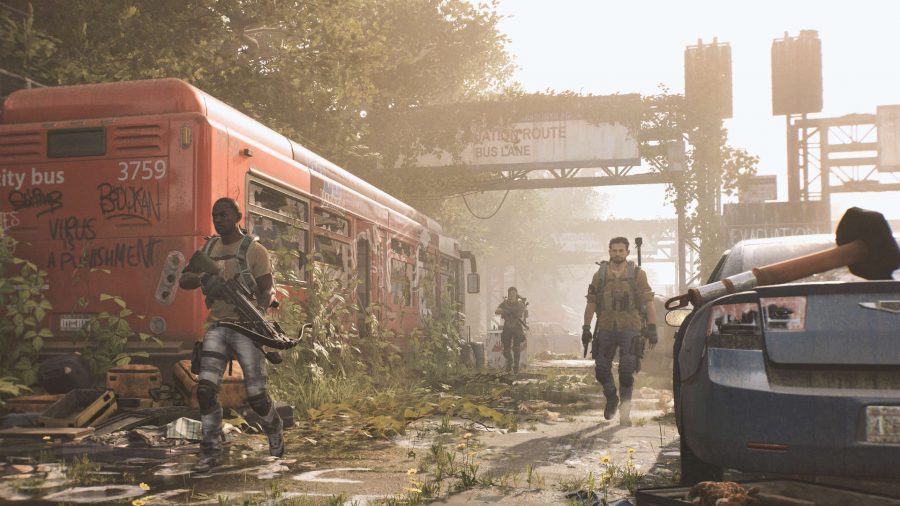 Enemies in The Division were split into key factions: Rioters, who were regular folk taking advantage of the disaster; the Rikers, escapees from Rikers Island; The Cleaners, blue-collar workers using their sanitation equipment to eliminate the infected; and the Last Man Battalion, a rogue private military company.

There are three The Division 2 factions we currently know about: the True Sons, The Division 2 Hyenas, and Outcasts faction. The Hyenas are your opportunistic raiders and use fear and aggression to control civilians. The True Sons  are a fascistic group who are well-armoured, well-equipped, and highly driven. Finally, the Outcasts are a faction of religious zealots with a charismatic and vengeful leader propping them up.

Finally, you’ll come across The Division 2 Black Tusk faction in the endgame. These are a ruthless military-like organisation who will invade previously completed missions and strongholds.

You assume your role as part of a team of government agents as they try to restore order in amongst these devilish The Division 2 factions, but it is also about civilian’s doing it for themselves. The Division 2’s civilian militias form to explore the world, build resources, and they can be called upon by the player to help.

You can’t release a multiplayer games in 2019 without a string of alphas and betas preceding, so yes, of course there’s been a The Division 2 beta. Unfortunately, all of the beta dates have been and gone, so you’ll have to wait for the full game launch to play more.

The main story is a great introduction to The Division, but the bulk of its appeal came from the Dark Zone – a terrifying, lawless PvP segment of NYC. The Dark Zone has been confirmed for The Division 2, but is changing in a few key ways.

The biggest change to The Division 2 Dark Zone gameplay is that there will now be three different Dark Zones around the edge on the map rather than one central Dark Zone. This will make the player journey much more natural for those who do not wish to engage in PvP, but also means each of the three Dark Zone areas gets its own aesthetic and gameplay style.

There will also be an introduction mission for each Dark Zone now, so that players can learn more about the world and get used to the distinct environmental challenges posed by each of these PvP areas. The three Dark Zones are located in the west, east, and south.

Dark Zones will also be normalised now, so players can’t exploit the game mechanics to create unbeatable DPS character builds and reap all of the best loot for themselves. The exception to this is the new Occupied Dark Zone state, which will eschew the gear normalisation and turn friendly fire on for one of the three Dark Zones.

Extractions are a little different, too. Now common items will no longer carry the contaminated tag, meaning they are instantly added to your inventory. You’ll still have to extract the rarest gear, but at least you’ll never lose everything to another squad. Speaking of, all extracted gear will now re-roll at the player’s power level, so if you steal someone’s loot you will end up with a worthy reward. In addition, Agents and opportunists can now steal other players extractions, hack SHD terminals, and lockpick supply crates to earn even more rewards from a Dark Zone run.

Finally, there are a new Dark Zone states: Rogue, Disavowed Rogue, and Manhunt. Do enough bad to earn the Manhunt status and you’ll have a bounty on your head for all to try and collect. 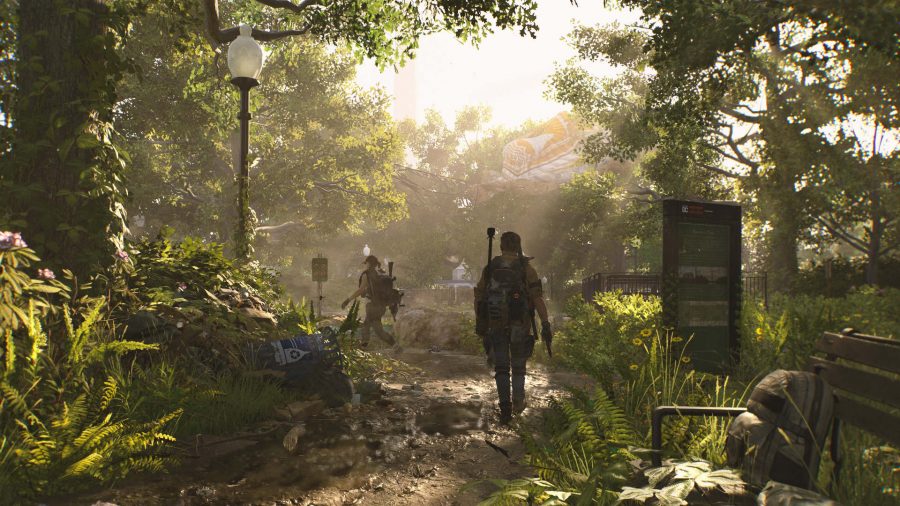 Perhaps the key letdown of The Division was its lack of content. Beyond the campaign and Dark Zone, the base game had little to offer, and DLC failed to fully rectify this. This time, Ubisoft and Massive are expanding late-game content considerably. And in case you’re worried about the main story petering out by the time you reach this stage of the game, Ubisoft also promise that The Division 2 ending will feature a huge twist to keep players hooked for all the endgame content.

First, we’re getting eight-player raids in The Division 2. According to Ubi’s official site: “These challenging missions will test the skill, communication, and teamwork of even the most expert Agents.” That’s all we know at this point, but this sounds similar in philosophy to Destiny 2’s six-player raids.

Read more: Join the fight in the best war games on PC

Further bulking out the main game are the three major pieces of free The Division 2 DLC, otherwise known as ‘episodes’. All will come out in the first year after The Division 2 release date with ‘title updates’ – which, with other Ubisoft games in mind – such as new gear and balancing changes. Compared with The Division’s relatively meagre two DLCs, this appears to be a much more generous offering. We will also have 52 world bosses to defeat during The Division 2’s endgame.

The Division 2 will launch with a dedicated PvP mode called Conflict. A suite of specialist versus modes, including Team Deathmatch, Skirmish, and Domination, these will allow opposing squads of four players to duel to the highest score.

Conflict is normalised – so all weapon gear stats are balanced and standardised, rather than being based on the main game’s loot stats – meaning that skill will be the governing element, rather than owning the most meta gun.

Little more is known about the PvP modes at this time, but we do know that Conflict will sport its own dedicated progression system, with unlockable cosmetics.

There are also new gameplay wrinkles once you reach the level cap of 30, too. The Division 2 specialisations let you progress past the level cap and send you down the new gameplay paths of the Sharpshooter, Demolitionist, or Survivalist. You start by selecting a new signature weapon. For instance, Sharpshooters get the .50 caliber sniper rifle that penetrates multiple foes and the Demolitionist gets a special grenade launcher. And you can take on and level up new specialisations as you sink more time into The Division 2 endgame.

In somewhat of an industry curveball, Ubisoft has removed the pre-order page for The Division 2 on Steam and opened one up on the Epic Games store instead. The suggestion is clear: The Division 2 probably isn’t coming to Steam. With Epic Games promising an 88/12% revenue share with developers it’s not hugely surprising to see a major triple-A publisher switch over to the platform, but Ubisoft is comfortably the biggest publisher to partner with the new Epic Games store so far.

PC gamers have had to deal with some sorry ports over the years, with multiple triple-A publishers opting to do the bare minimum when it comes to bringing their console titles over to PC. Fortunately, Ubisoft appear to be going all out with the PC version of The Division 2, promising plenty of PC-specific features and optimised performance all the way from budget builds to high end rigs. Watch the Division 2 PC trailer above to see what kind of features you can expect:

So, uncapped frame rates and resolutions, support for multiscreen and ultrawide monitors, HDR and 4K support, custom HUD and UI options, and proper PC text chat. That’s not a bad haul. Plus, Ubisoft say a broad range of rigs will be able to run the game, which brings us neatly onto the next section…

Official PC specs are now known for the Division 2, so you can prepare your rig accordingly. Can you run it? Check your PC against The Division 2 system requirements.