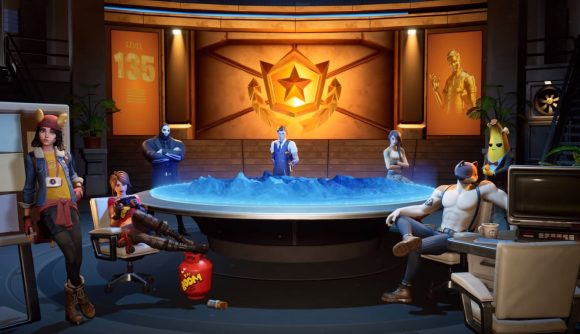 Fortnite Chapter 2, Season 2 is well underway, and shiny new content just keeps coming with update v12.10’s arrival. Fortnite dataminers have been taking a peek at the various items that have popped up in the battle royale game’s files, and it looks like there are some exciting goodies on the way.

First up, renowned Fortnite dataminer Hypex has posted a bunch of their findings on Twitter, including some images of a new ‘heavy shotgun’ – a “pump shotgun with a large magazine” which “fires slugs for medium-range effectiveness”, according to its description. Plus, there’s a new legendary version of the scoped assault rifle and a “fast firing automatic SMG” called ‘The Pepper Sprayer’ added to the game’s files, too. You can get a look at some of these below.

That’s far from all, though – Hypex has posted images of a bunch of new skins (including what looks like a new rarity called ‘Slurp’), some Deadpool backbling, four new weapon wraps, a ‘Prime Moves’ emote, and an assassin version of Fishstick. Sweet.

Another dataminer, Lucas7Yoshi, has also been busy posting goodies they’ve discovered in-game as of the update, and they include some new gliders, emotes, and pickaxes, as well as some new variants, such as ‘dark’ style options for the Flying Slasher and Zorgoton.

If this is for BR then here are the sounds..
Description: "A fast firing automatic SMG that is most accurate when fired in short bursts." pic.twitter.com/PQ7LnE1QSa

FireMonkey, meanwhile, has been looking at some of the other files that have appeared, and has discovered “a new LTM called ‘Infiltration'”, new cosmetics, a new foraged item (honeycomb), and some new “spy/infiltration LTM strings“. For example, “Gather Intel to unlock new levels of Spy Tech to use during Operation matches!” and “Choose Ghost or Shadow to secretly support while playing Operation matches this season!”

There’s also a bunch of stuff added to Fortnite’s PvE mode, Save the World (including a “spy llama!”) – check out FireMonkey’s Twitter channel to take a look at these.

A new LTM called "Infiltration" was added to the files in v12.10

I assume this will relate to the Faction Wars LTM and will have you stealing intel from the enemy faction. pic.twitter.com/k5XqLgPto5

If you’re a Fortnite fan, be sure to get a look at our guides to Fortnite security plans, Fortnite factions (like, what’s the difference between Ghost and Shadow?), and Fortnite bosses, so you can get the most out of the battle royale’s new update before the Fortnite Chapter 2 Season 2 end date rolls around. You might also want to take a sneaky peek at these Fortnite update v12.10 patch notes Epic Games won’t tell you (sssh!).