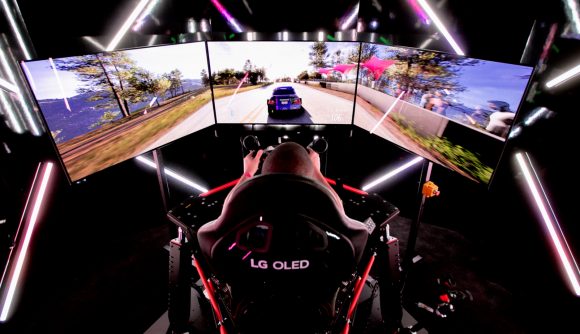 Forza Horizon 5 has speedily overtaken all other racing games on PC, with over three million players across Steam and Xbox. However, even those with the best PC steering wheels will struggle to match the setup LG and Xbox created in celebration of the game’s launch.

In a special pre-launch event, a select few fans were invited to a secret location in Surrey, England, where they had the chance to play Forza Horizon 5 on a seriously cool 4D setup. It boasted a custom driving pod, including a full racing chair and steering wheel control, complemented by a triple monitor setup of LG OLEDs, surround sound, with fans and aromas to boot.

In our Forza Horzion 5 review, we said it’s “polished to a degree that hardly seems possible” and it’s hard not to say the same about this setup put together by LG and Microsoft. LG OLEDs make for some of the best gaming monitors you can buy, thanks to their 120Hz panels, GSync support, and HDMI 2.1 ports, but it’s worth mentioning that they require a greater deal of care due to the risk of irreversible image retention.

OLEDs might be inaccessible for many because of their higher price point compared to LCD displays, but developer Playground Games has made a concerted effort to make Forza Horizon 5 the most accessible game in the series to date. Features like its Tourist difficulty mode and picture-in-picture sign language options help ensure more racers find their way to the track.

While hooning a Porsche or Reliant Robin around Forza Horizon 5’s Mexican highways is undeniably good fun, there’s a tonne going on under the game’s hood. Playground Games told us how gaming SSDs impacted more than the game’s loading times and even improved its graphics quality and wider game design.