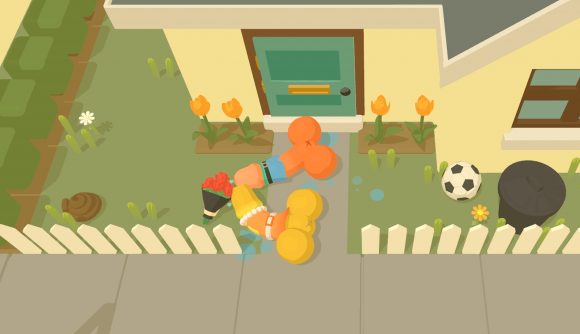 Genital jousting is a sex game about competing in various challenges as a colored flaccid penis. It’s also about challenging negative stereotypes surrounding manhood, as the developers explain in a recent making-of feature.

Evan Greenwood, the Creative Director of Free Lives, and Richard Pieterse, a now former developer from the studio, sat down with gaming documentary-makers NoClip to talk about the origins and meaning behind Genital Jousting. In the back-half, they discuss the subtext and nuance of the story mode, and using it to address toxic masculinity, albeit in a slightly subtle way.

“What we wanted, ideally, was to convince someone who could’ve harbored some toxic masculinity that we were friends of theirs. We’d be telling jokes that would be crass and would be funny, and make it feel like the game wasn’t trying to convince anyone of any particular stance,” Greenwood explains. “At some point we’d almost earn a trust through that, which we’d then burn by, particularly towards the end of the game, showing what we felt was a better kind of masculinity.”

This isn’t an easy subject to brooch. As the term implies, toxicity tends to follow any time toxic masculinity or the discussion of gender archetypes comes up, especially in games. Although in some ways the industry is improving, we still have a long way to go. The team knew they had to be careful in order to avoid putting off someone who might benefit from hearing an alternate perspective.

“We didn’t want to make a game that outwardly says ‘hey, we’re going to change your mind about toxic masculinity’, because you can’t change someone’s mind about toxic masculinity if that’s what you already told them that’s what you’re going to do,” Greenwood says, adding that keeping it as a surprise made the release nerve-wracking, hoping all the while they don’t appear like they’re “making a huge fart joke at the expense of gay sex.”

Free Lives is a well-established name in the indie space nowadays, having put out completely over-the-top action movie spoof Broforce previosly to Genital Jousting. If all the penises are a bit much, we have more safe-for-work multiplayer games and co-op games at those links, and a list of highlights from the Steam Game Festival.