Wondering how to activate the mechanism in Genshin Impact? The Genshin Impact 2.6 update has arrived, bringing with it plenty of new content, including Ayato, Ayaka’s brother, a new Genshin Impact character on the current Genshin Impact banner – and a brand new area called the Chasm.

Down in these mysterious underground mines, there are a series of tasks you are asked to undertake as part of a world quest chain called ‘The Chasm Delvers’. One of these quests, titled ‘The Heavenly Stone’s Debris’, requires you to talk to Zhiqiong and then activate the mechanism in the Chasm. There are three mechanisms you must activate to progress further.

However, some players are having trouble activating these mechanisms due to the mysterious purple slime in the way. You can remove this slime using the Lumenstone Adjuvant gadget, but you must first upgrade the gadget to level two. Here’s everything you need to know in order to activate the mechanism in the Chasm in Genshin Impact.

How to activate the mechanism

This part of The Heavenly Stone’s Debris quest takes place in the Stony Halls, south of the main mining area in the Chasm. There are three mechanisms on the cavern floor beneath you, marked on your map – but they’re not working due to globs of purple ooze nearby, known as Oozing Concretions. To activate the mechanism, use your Lumenstone Adjuvant gadget to remove the Oozing Concretions near the mechanism. 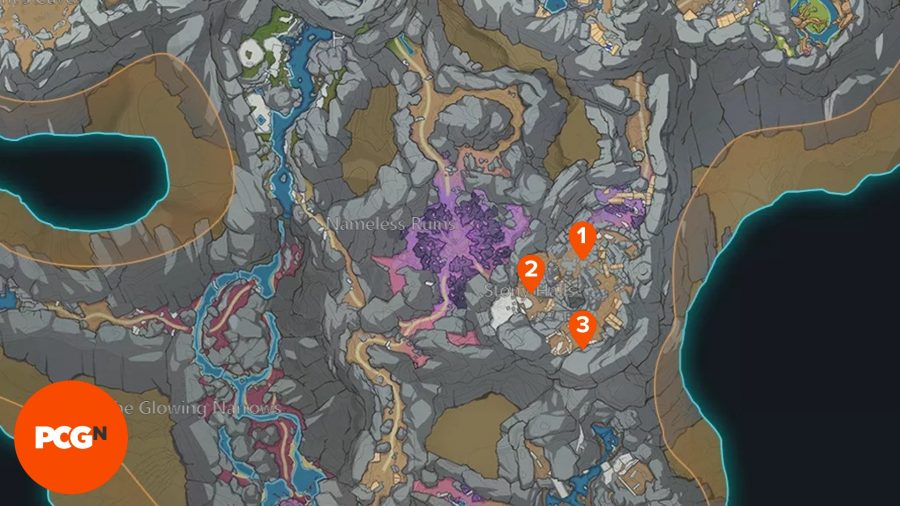 If you’re having trouble removing the purple slime, note that your Lumenstone Adjuvant must be level two or above to remove Oozing Concretions. It also needs to be refilled with energy from the nearby blue orbs.

With a fully upgraded gadget, you should have no trouble activating the mechanisms and continuing with the quest. If you fancy a challenge, we’ve also got a guide on how to unlock the Genshin Impact Lost Valley domain. Be sure to keep an eye out for the upcoming Hues of the Violet Garden event, too, as you can earn a free Xingqiu, and check our Genshin Impact codes guide to get some more free goodies.