Looking for more information about the Genshin Impact Yoimiya banner? Yoimiya is the next banner upcoming in the 2.0 update, and hails from Inazuma.

Yoimiya is described by Kamisato Ayaka as being Inazuma’s best pyro-technician and is the owner of Naganohara Fireworks, the town’s local fireworks store. As a Pyro and bow user, players are interested in seeing whether she ends up closer to someone like Ganyu rather than Amber on our Genshin Impact tier list. Pyro characters like Diluc and Hu Tao typically place highly on our tier list, but we’ll have to see what rarity Yoimiya ends up being to determine how good she actually is.

If you’re worried about Yoimiya not being worth the primogems, the devs are actively buffing her to ensure she is ready for action in August. The devs also released a new character teaser of the firework shop owner in action in the run-up to the Yoimiya banner release date. 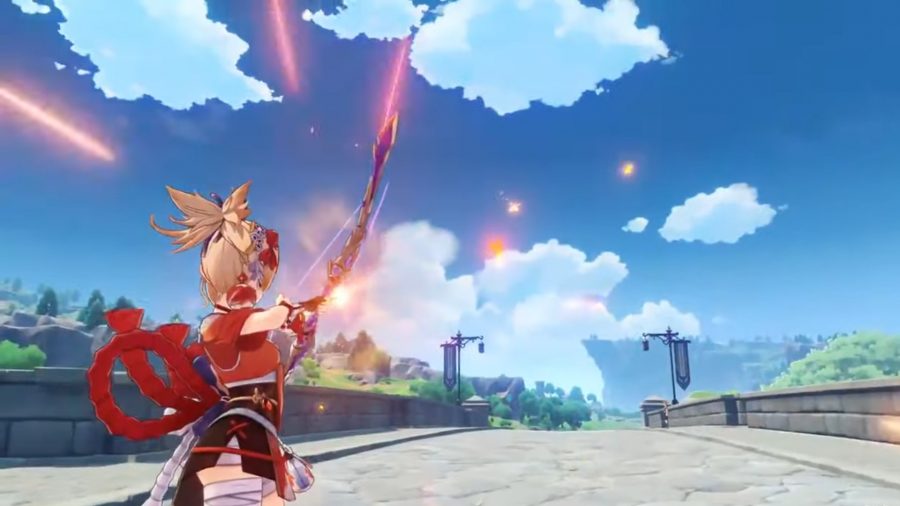 Yoimiya’s abilities were revealed on the Genshin Impact 2.0 livestream. You can check them out below.

With a flourish of incense fireworks, a ring of saltpeter surrounds Yoimiya.

Teika Enshou: When this happens, arrows fired by the normal attack are blazing arrows, and their damage is increased and converted into Pyro damage. Charge level 2 does not generate kindling arrows and the effect deactivates when she leaves the field.

As her original creation, the Ryukin Saxifrage leaps into the sky, and releases blazing rockets dealing AoE Pyro damage, marking an enemy with Aurous Blaze…

Aurous Blaze: All normal, charged, and plunging attacks, elemental skills, and elemental bursts by other party members marked by Aurous Blaze deal AoE Pyro damage. When an enemy is defeated during the skill’s duration, the effect transfers to another nearby enemy. One explosion occurs every two seconds. If Yoimiya is down, the skill is deactivated.

If you successfully obtain Yoimiya, we’ve put together a guide to the best Genshin Impact Yoimiya build. If you can’t afford another wish, here are all the Genshin Impact codes for free primogems.