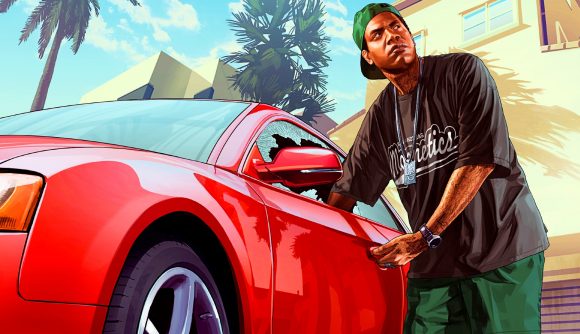 Three things in life are guaranteed: death, taxes, and people still buying Grand Theft Auto 5. After jumping back into the Steam top seller’s list recently, the open-world game was the number one game on Twitch for March 2021, the first time it’s attained the honour.

The achievement was logged by StreamElements, a toolkit and support network for streamers. According to its data, Grand Theft Auto 5 logged the most hours watched on Twitch during March of this year, viewers tuning in for a combined 181,000,000 hours. This is nearly 40,000,000 above the next entry down, League of Legends, and over 70,000,000 above Fortnite. It’s the first time Rockstar’s behemoth has placed this high, at least since 2016 when StreamElements began recording this data.

Just chatting is still plainly number one on the list, making up 265,000,000 hours watched in total for the month. More and more variety streamers are coming to the platform, and the streams are getting more, um, varied, shall we say. Over two million hours of sleep streams were watched, led by Ludwig Ahgren, whose endless subathon stream is actually still going, over three weeks strong at time of writing.

This particular boon for GTA 5 is due, at least in part, to an increased interest in RP servers from streamers. These are custom servers where you role-play a particular job in the ecosystem, like DnD or what have you, and they can be stressful. Several of the most watched streamers, including xQcOW and summit1g, have been playing the crime game, and having success doing so.

Should you be considering becoming a GTA 5 content creator, we have a guide on how to make money in GTA 5, and our sister site the Load has you covered on GTA 5’s stock market.