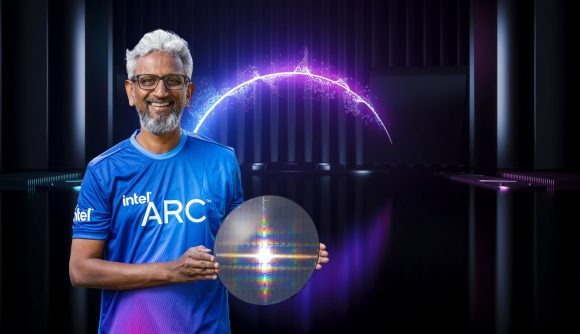 Much as Intel’s Alder Lake processors rank among the best gaming CPUs, the company is looking to compete against AMD and Nvidia’s best graphics cards with its own Xe-based Arc cards. While official details on these components are scarce, hardware leaker TUM_APISAK claims to have details on both the specs and performance we can expect from the Intel Arc a380 GPU.

It’s unclear whether this is a mobile or desktop GPU, but its name aligns with a previous leak from momomo_us, which showed the naming conventions Intel is using for its Arc lineup. The ‘a’ undoubtedly stands for Alchemist, the codename team blue is using for its first-generation lineup, which means we could potentially be looking at Arc b380, c380, and d380 cards over the next few years.

The Alchemist card will allegedly boast a 2,450MHz boost clock, and 6GB of VRAM of an unknown specification. How this translates to real world performance remains to be seen, but TUM_APISAK states that the Arc a380 should offer comparable performance to an Nvidia RTX 1650 Super.

Even so, the Arc a380 could face stiff competition from the likes of team green’s RTX 3050 and RTX 2060 Super 12GB refresh, provided the ongoing chip shortage or crypto miners don’t turn Intel’s GPU debut into something of a paper launch.