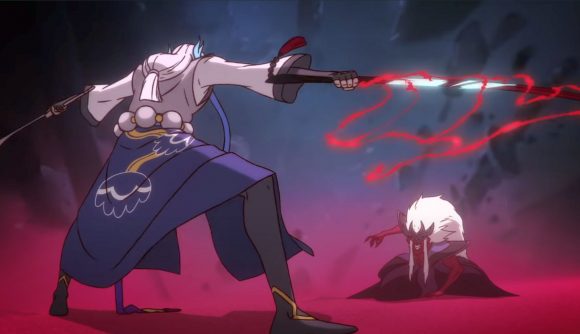 Hot on the heels of League of Legends new Jungler Champion Lillia‘s debut for Riot Games’ flagship MOBA, it looks like we’ve got our first official peek of the next Champ headed its way. Riot’s unleashed a brand-new animated trailer titled ‘The Path, An Ionian Myth’ – and fans are pretty sure it’s pointing to the next name headed to LoL, Yone.

“Every myth carries a seed of truth. A slain swordsman must decide if he will make peace with his past – or be consumed by it,” the animated short’s description teases. This ties directly into the lore surrounding Yone – who so far has just been confined to LoL lore – and his half-brother Yasuo, one of the best League of Legends Champions, and Yone’s younger half-brother.

In the clip, included below, we can see the lone figure awaken in a mystical, forest-like land strongly reminiscent of the LoL Spirit Blossom skins and artwork we’ve seen emerge recently, before encountering a nightmarish sight. Two sword-wielding warriors fight, then he sees what looks to be a vision of one of their deaths. His? We might wonder.

He’s taunted by whispers and ominous voices until his vision – a stone effigy of what seems to be himself – opens its eyes and says, “You could have saved them”, as a terrifying, monstrous figure appears and locks into fierce melee combat with the wanderer. Gulp.

The figure that emerges victorious is changed, struck and bitten during the course of his fight and seemingly transformed – possibly not for the better. He ventures out into the woods as a festival of some kind twinkles far in the distance. His masked head turns and the clip cuts to reveal a date tying into the Spirit Blossom theme: “Cross Over July 22”. Take a look below:

Signs that Yone could be coming to LoL have been popping up for a while. An apparent Yone Spirit Blossom skin recently leaked online, and as highlighted in the LoL patch 10.15 notes, some Thresh voice files have popped up on the PBE, which are number variants of ‘First Encounter 3D Yone Skin’.

At the beginning of the year, Riot announced that League of Legends will get two new Champions in big summer event, one of which turned out to be Lillia (whose splash art also leaked early), and the other, teased as “a masked Champion who refuses to die.”

Yone hasn’t officially been announced as the next LoL Champion as yet, but it’s looking ever more likely that we’ll see Yasuo’s troubled half-brother head to the game, possibly very soon.