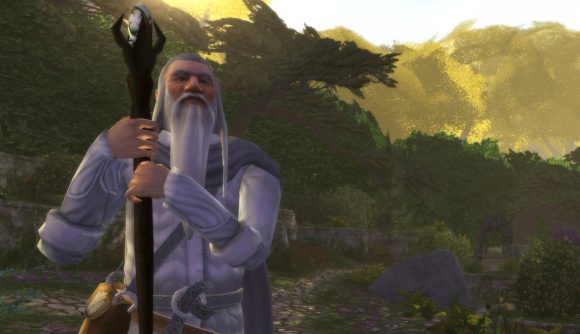 It looks like The Lord of the Rings Online will be getting a visual overhaul by 2022. According to information from an investor presentation, the MMORPG game is slated for a range of updates to coincide with Amazon’s Lord of the Rings TV series.

Among the slides for an EG7 investors briefing, Lord of the Rings Online publisher Daybreak Game Company is given a whole section as a recent member of the games development conglomerate. Across the information given is a brief timeline for Daybreak’s games, DC Universe Online and LOTR Online. According to that, Daybreak is planning “visual and technical
updates” for LOTRO, on both PC and next-gen consoles, so the multiplayer game is looking fresh for Amazon’s blockbuster LOTR production.

These upgrades are penciled in for 2022. Amazon’s show is still tentatively scheduled to starting next year, in 2021, but who knows if it’ll be able to stick to that given the ongoing pandemic. The new TV series will take place during the Second Age of Middle-Earth, making it a prequel to the Lord of the Rings movies we know and love, and it’s a hefty investment, costing an estimated billion dollars. As it happens, Amazon Games Studios is co-developing another Lord of the Rings MMO with Athlon Games, so viewers will have a bit of choice as to what fantasy game they want to play.

In June, Lord of the Rings Online players came together in tribute for Ian Holm, the actor who played Bilbo Baggins in Peter Jackson’s film trilogy, after he passed away. Perhaps the updates will enshrine a memorial for the beloved performer.

We have the best dragon games, best medieval games, and best sword games, if you want more fantastical action.