Want to know where to find seeping stones and get New World oil? Confusingly, there are multiple different kinds of oil in New World. If you’re looking for New World Fish oil, it’s a simple process: you can obtain fish oil by salvaging caught fish, which you can learn how to do in our New World fishing guide. You can make New World cooking oil by combining two fish oil with one nut, or searching in the supply cart in towns, provided your New World faction controls the town.

Regular old oil is acquired from seeping stones. You need a level 20 mining skill level before you can mine seeping stones, but once you do you can harvest crude oil. You can use New World oil to create coatings at arcane repositories in town to give your weapons buffs against certain enemy types. Oil is also used in potion-making, and when making certain items of furniture. If you’re heading into one of the game’s many expeditions, including the New World Amrine Excavation, then you may wish to stock up on potions and weapon coatings to bolster your damage.

You can only find seeping stones in two areas: Weaver’s Fen and First Light. Finding them early on can be tricky, especially if you don’t have level 45 mining skill which unlocks the ability to track the stones; they appear as droplets on your compass at the top of the screen. They yield precious resources and give decent mining experience, so they’re worth seeking out. We found a great New World seeping stones oil farming location for you to get oil early in the game.

The best place to farm oil in New World is in First Light. The two ponds in the northwest of the region have a bountiful array of seeping stones. 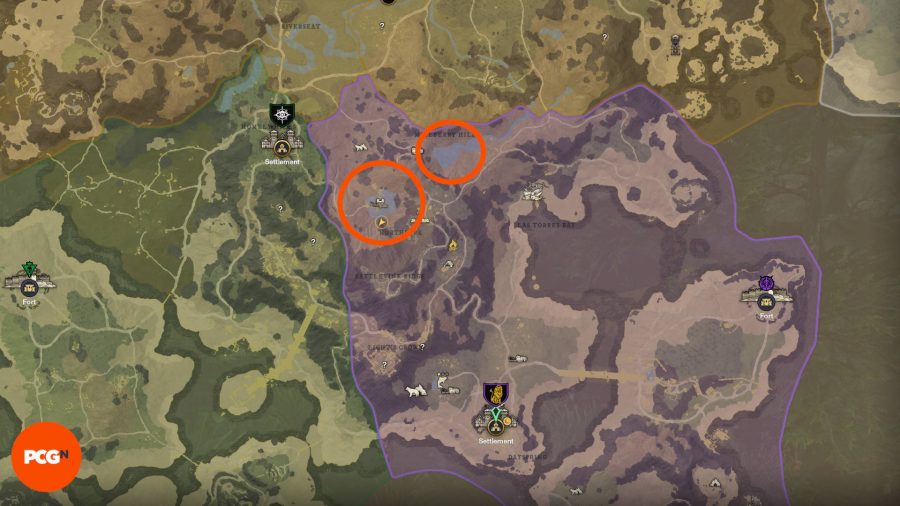 We recommend going to the area around the pond, close to the small fishing settlement west of Northfork. Stick to the shoreline to the south of the pond and you’ll see black spots in the ground: these are seeping stones that you can mine for oil. Some of these seeping stones are huge, yielding as much as 16 units of oil. If the stone is steaming, you can mine its oil.

You may wish to learn where to find some of the other valuable resources in the early game, so we have guides on how to farm New World hemp, New World iron ore, and New World briar branches. We also have tips on New World leveling, and New World PvP if you’re looking to test your build against other players.