New to crafting in Outriders? If you’ve been busy playing the Outriders demo and possibly farming the boss locations to get all the best legendary weapons, then you may have noticed crafting isn’t available just yet.

Crafting will be in the full game release, however, and you’ll finally be able to put all those harvested materials to good use. To begin crafting, you first need to unlock the base and complete some of the main quest, which means enduring quite a lengthy opening tutorial scene and introduction to your anomaly powers by choosing one of four Outriders classes.

You need to talk to Dr. Abraham Zahedi to access the crafting menu, where you’ll be able to spend resources such as leather, iron, and titanium, as well as anomaly shards, to upgrade and craft new gear. In the demo, Zahedi isn’t available yet – to access him, you need to complete the quest Reunion and leave for the First City where he is being held captive by the Insurgents. Here’s everything you need to know about crafting in Outriders to improve and level up your weapons and items.

How to craft items in Outriders

You can harvest resources in Outriders by mining ores or killing animals, or dismantling old gear. Here are the resources you can collect:

Improve rarity and level up items

There are five rarities in Outriders: common, unusual, rare, epic, and legendary. You can increase an item’s rarity up to epic by using iron, leather, or titanium. The item’s bonus attribute will be randomly assigned, but you can select one of three possible mods.

As well as improving an item’s rarity – rare, epic, and legendary items can be leveled up using leather, iron, or titanium. This increases the item’s primary stats – firepower or armour – and rerolls the attribute values. 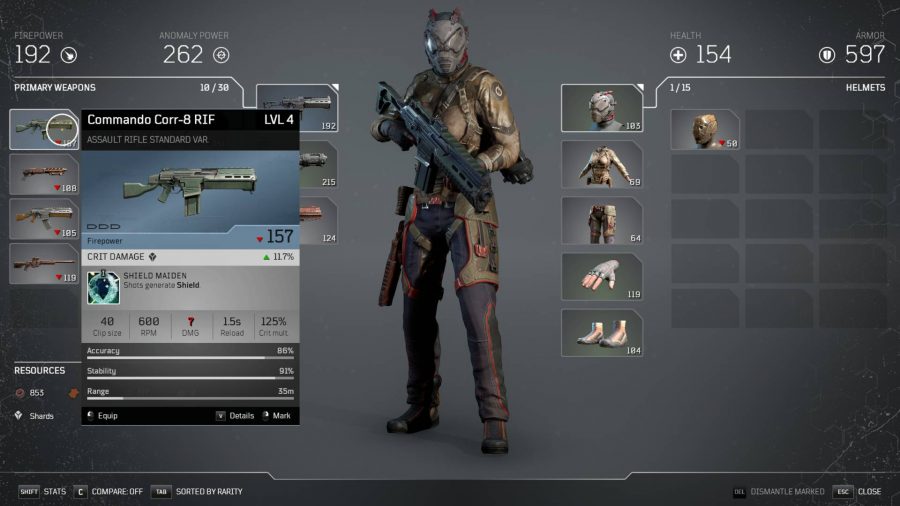 You can read how to mod gear in our Outriders modding guide, including a full list of all the mods we know about so far – but essentially you’ll be able to tinker with mod attachments, swapping mods in and out to create deadly combinations.

As you progress through Outriders, you’re able to swap weapon variants as you level up. Weapon variants include firing mode (single-fire, burst-fire, automatic), clip size, damage per second, recoil, spread, and scope. So if you have a favourite gun, but aren’t keen on the firing mode, you can easily swap it out in the crafting menu.

That’s everything we know about crafting in Outriders before the game releases this week, but be sure to check out our Outriders Trickster build guide and Devastator build guide in the meantime.