It’s been a quiet couple of years for Rainbow Six Siege. Major content additions, such as new maps and operators, have slowed down to make room for dozens of technical improvements and quality of life changes. It’s vital work, but it’s also far less likely to convince someone to boot up than a new character who can change the way the game is played.

Creative director Alexander Karpazis and the team at Ubisoft is well aware of this predicament, and their solution comes in the form of Azami, a new operator with a gadget that can block lines of sight, patch up destroyed surfaces, and create entirely new defensive setups. She’s a genuinely game-changing addition to the multiplayer FPS game, and according to Karpazis, her arrival in the upcoming Operation Demon Veil represents a return on the technical investments made over the past few seasons.

We spoke with Alexander Karpazis ahead of the release of the new season to learn more about Azami, the history of her development, Year 7, and the importance of restating Ubisoft’s long-term ambitions for the game.

You said you spent like a year working on Azami, so how many iterations has that gadget gone through?

Azami has had a long and storied past, mainly because the idea behind her gadget – to repair destruction or patch holes – is integral to Siege. We focus so much on destruction and opening up rotations or new avenues for attackers to push through, so this has been an idea pretty much since the inception of Rainbow Six Siege. And you can see that with Castle, but his gadget is a lot more binary when it comes to covering up windows and doors. But the idea has always been there. And the idea to grow in that space has always been there. 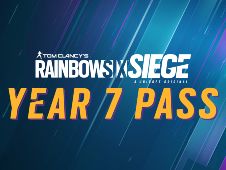 I think about five years ago, we had a prototype called Patcher, which worked a bit like a ranged Castle barricade. You would essentially shoot Castle barricades at windows and doors, and at reinforced walls as well. It would always be this square kind of patch that would connect and fill the space, but it was wildly difficult to get right and we couldn’t find a great way to make it feel unique compared to what Castle was doing. 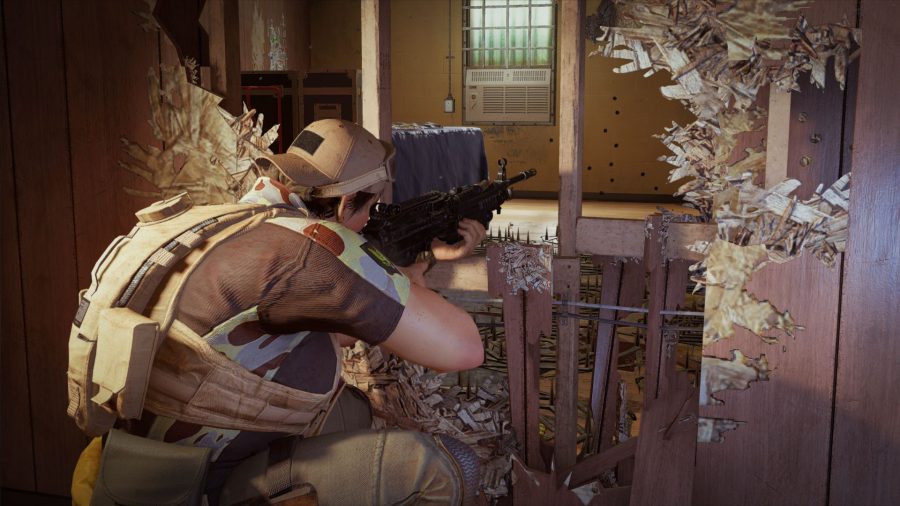 Then over a year ago, we had a prototype called Flubber. This essentially acted like Ela’s Grzmot Mines, so you would throw them and they would explode into a radial pile of green goo. And so you could stack the Flubbers all over the place. That gave us the organic new direction that we really, really enjoyed.

we had a prototype called Patcher, which worked like a ranged Castle barricade

But it’s still crazy difficult to develop. For example, our sound engine never anticipated the need to organically block sound from destruction holes in the floors and walls. And so it meant that we had to go back and do a lot of homework if we wanted to get it right. We began in earnest a year and a half ago on Azami’s Kiba Barrier, getting the metrics right, getting the creativity right, and solving issues like sound passing through the barrier as well. Honestly, it’s been an incredible journey.

We saw content creators creating platforming sections with the Kiba Barriers and accessing previously unthinkable areas of the maps. Did you know about that particular interaction before?

No, because it was never intended to work like that. Azami is an architect, not a parkour athlete, so the Kiba Barrier was never intended to be a device that you can use to get you into hidden spaces. The intent was always to have a unique operator that can help reconstruct the site while the match is in its action phase. So again, this is a situation where our players far exceed what our initial expectations were for the operator and so we had to answer to that pretty quickly.

There were a lot of references to Operation Velvet Shell in the reveal stream, suggesting that Azami is going to have a huge impact on the meta just like Mira did – it feels more impactful than Mira to me.

I think the team would agree with that, too, in the sense that Mira and Velvet Shell redefined what it meant for on-site defenders; it gave them access to information and opened up new ways to play. But Azami answers a much more fundamental question, one you only really see in Rainbow Six Siege, which is destruction. And that’s probably why it’s resonating with so many people right now. 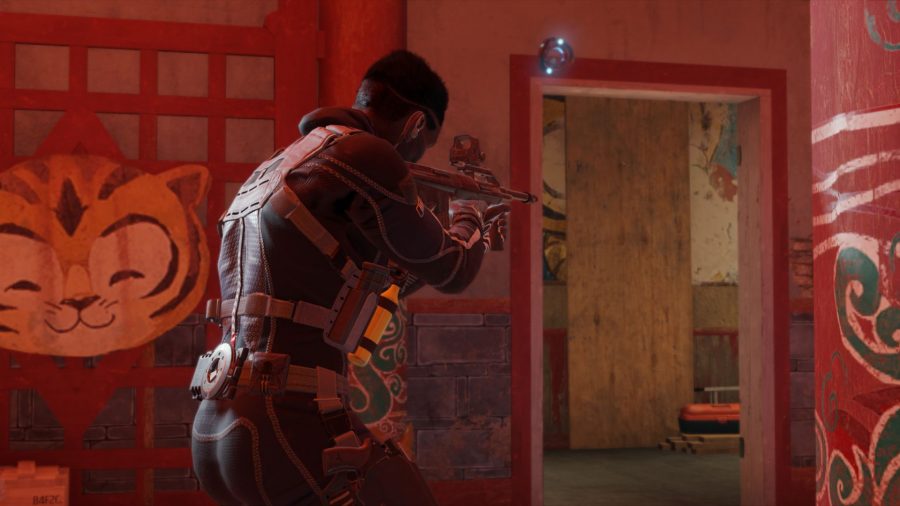 Are you looking at this as a new role in the cast of siege?

So we call her an architect, and to a lesser extent Castle is an architect too: he has a lot of utility that helps the defenders shape the site. The idea behind the role was always there, it’s just a challenge on the execution. We’ve never seen this role grow as much as we’ve seen other roles expand across Siege’s cast of characters. It’ll be interesting to see how this plays in the pro scene and in ranked, and to see how the meta adapts; maybe we’ll need more characters within this role to come into the game.

Azami’s gadget animation and ‘hidden blade’ setup reminds me of another well-known Ubisoft character – was Assassin’s Creed an inspiration?

Originally, we didn’t know that the character would be from Japan. And so in a previous iteration the device was more like a butterfly knife, which brought a lot of unique personality. When we knew the operator was a bodyguard from Japan, though, we wanted to make sure that the device fit the aesthetic of the character and their origins, so we did have to change it. So we didn’t directly take inspiration from Assassin’s Creed’s hidden blade, but we actually had a couple of developers from Assassin’s Creed working on Siege, including one of the original riggers for the hidden blade. So we already had the knowledge there and it was actually a lot of fun to bring that to the world of Siege.

On the proposed ranked rework, I did find it funny that everyone – pros included – is going back to copper, do you take a little bit of delight from that?

Well, there’s two things going on here. One is that your rank should always feel like a progression, it should never be this state of constant frustration in which you don’t think you’re improving. Separating MMR from ranked progression is important to us, and that allows us to do things like no longer having to do soft resets of your MMR so that you’re constantly in the pool of players that you should be playing with. At the same time you also get all of the rewards for progressing through the ranks each season. So hopefully this means that even if you get bumped back down to copper, you’re going to get a heck of a lot more rewards now from ranked games.

By separating MMR that’s attributed to the player from the actual rank – whether that’s copper, platinum, or diamond – you will always maintain your match rating. So even if everybody has the title copper, you’ll be put into the same MMR bracket as you should be in whenever you’re playing ranked. So the experience of a high MMR player will be very different from the experience of a low MMR player, and the difference between them is only their dedication to push the cap of their MMR ranking. 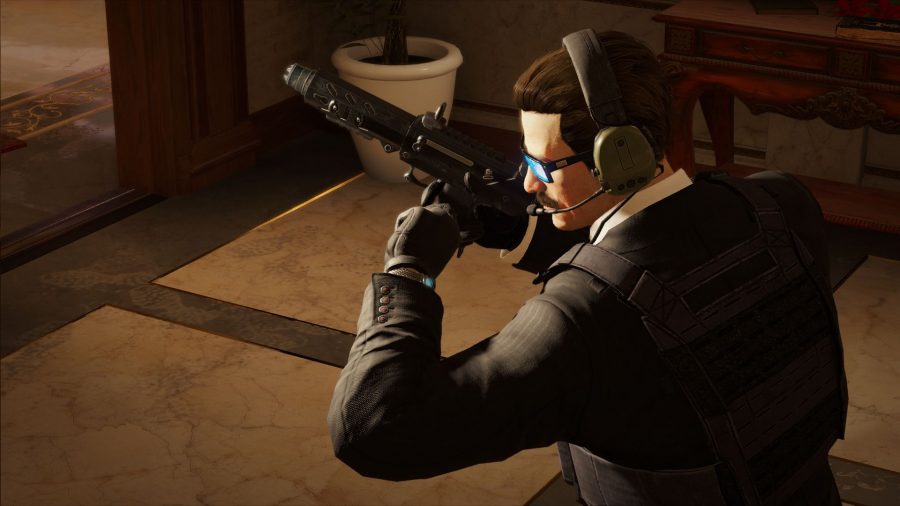 Will this all be transparent for the players?

Everybody still will have their MMR number that they can follow and it will be adjusted after each match, so we’ll absolutely be keeping that transparency for the players.

At the end of the reveal stream you closed by saying “Siege is here to stay”. Why do you feel that now is such an important time to restate Siege’s long-term ambitions?

For us, it’s really important for the community that has stayed with us, that enjoys this game, to hear and understand that this game is going to receive all the support it needs to be as successful as it can be. We really do believe that Rainbow Six Siege is one of the top tier games in the world, and it’s in large part because of the community. What they ask for and what they find important helps decide the roadmap for us each year.

I think we’ve done a lot of homework and we’ve put down the foundations for the game. As a result, this year more than others we’re actually seeing the return on that investment. While we’ve made huge dedicated improvements to features that may not be player-facing, this year is the big one that will help players understand why we chose to invest so much in core gameplay, or online technology, or anti-cheat, or even anti-toxicity. This is the year that players begin to see all of that pay off. We’ve established that there’s trust there, there’s support there, and we have long-term ambitions. This is what you’ll get when you support a game like Siege.

Is it a surprise to you that we haven’t seen a triple-A competitor to Siege yet?

Honestly, I feel sorry for any game that tries this kind of recipe now. We have seven years of technology, and systems, and operators, and stories. This game is more than the package it was six years ago. Because we’re a service game and because we’ve done so much investment, I think it’s actually pretty intimidating to compete with something like that now. So we take immense pride in that and even if it feels like it’s an obvious game to imitate, it wasn’t when Siege first launched, and so we’re extremely happy it resonated with so many other people.