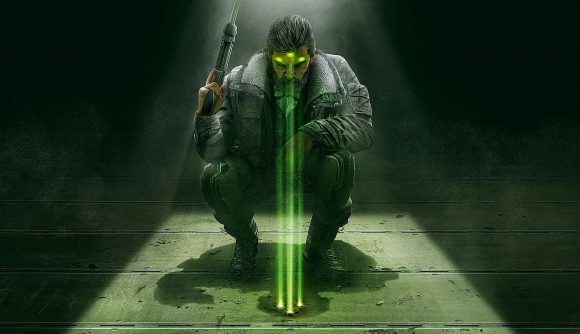 With the Rainbow Six Siege Shadow Legacy release date fast approaching, we’ve been getting an idea of what’s headed to the FPS game’s live servers very soon. Aside from hearing it’ll be “the biggest, most meta-game changing season” yet, and will feature Splinter Cell’s Sam Fisher, some hidden changes on the way have been highlighted by Siege streamers and casters – and it looks like there are centre dot, bomb, and wallbang tweaks on the cards.

As pointed out by Rainbow Six Siege commentator Michael ‘KixstarTV’ Stockley on Twitter, it appears a centre dot’s been added to the multiplayer game’s HUD, in the form of a white targeting reticle. “This dot is going to make finding the centre of your screen automatic, when in the past it was rather difficult,” Stockley says, adding “curious to see how it changes gunfights, it’ll be subtle.”

It’ll be a helpful addition to the game for newbies keen to get to grips with the finer aspects of FPS technique, but players keen to keep things as-is needn’t worry – he adds in a follow-up tweet that “you can turn it off.”

In addition to this, Stockley’s posted: “They changed the bombs”, alongside an image highlighting this. Siege’s bomb chassis used to have some gaps in it, which essentially meant you’d be able to pull off some impressive angles while remaining tricky to pick off yourself. It appears from the picture that the studio’s closed the design up somewhat, so it’s now more solid, and without gaps.

This dot is going to make finding the center of your screen automatic, when in the past it was rather difficult.

Imo this will elevate many players. Some will like that, others will say this lowers the skill ceiling.

Curious to see how it changes gunfights, it'll be subtle. pic.twitter.com/BNftYmClZr

Plus, as spotted by Siege YouTuber BikiniBodhi, “another hidden change in the Shadow Legacy patch is that ARs and downwards (in terms of calibre) only go through one wall. Meaning […] no more random spray headshots through two walls!” You can check out the clip the YouTuber’s posted alongside this below.

They changed the bombs pic.twitter.com/fvxGGeWLUB

This change means, when the update goes live, there’ll be far less chance of getting wallbanged through two walls at once, which should not only make life more difficult for hackers, but also reduce frustration from lucky shots managing to get through that second layer of brick and mortar. Lovely.

Oh, another hidden change in the Shadow Legacy patch is that AR's and downwards(in terms of caliber) only go through 1 wall.

Meaning that no more random spray headshots through 2 walls!

There’s no exact Shadow Legacy launch date to scribble down just yet, but based on the cadence of previous season releases, we’re guessing it’ll arrive on September 14, or thereabouts. Ahead of then, be sure to read up on the Rainbow Six Siege new operators, best Rainbow Six Siege operators, and what else is to come along with Rainbow Six Siege Year 5 – it’s shaping up to be a biggun.