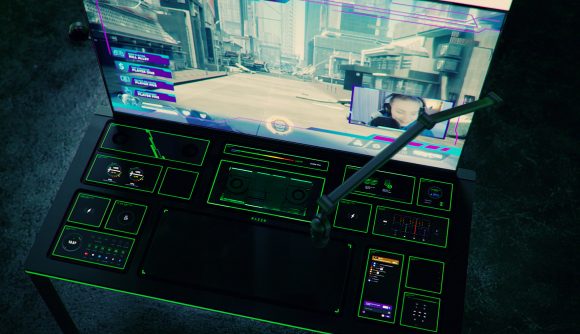 Once you’ve plonked your gaming monitors down and arranged your keyboard and mouse, gaming desks aren’t usually something that’s on the upgrade radar. Razer believes your table could offer much more, however, and its Project Sophia concept envisions a fully modular desk with something for everyone.

The Secretlab Magnus might take issue with Razer’s claim that Project Sophia is the “world’s first true gaming desk concept,” but it certainly looks like the most technical. Adorned with touchscreens and displays, it’s designed with a whole host of functionality, such as monitoring tools to keep an eye on your system temperatures, hotkeys that take a cue from the Elgato Stream Deck, a streamer panel to swap scenes or check chat, and even a graphics tablet when paired with a stylus.

On the hardware side of things, everything’s swappable. The monitor slips into place, THX-powered computer speakers magnetically clip onto the side, and it even makes it easy to attach your gaming microphone, webcam, and lighting.

This would all be powered by Intel and Nvidia components under the hood and cooled by a vapour chamber solution that you’d usually find in gaming laptops. Unlike Lian Li’s hybrid PC desks, the chassis that houses these components would be much easier to access for upgrades since it snaps on magnetically, and eGPUs should be plug and play. 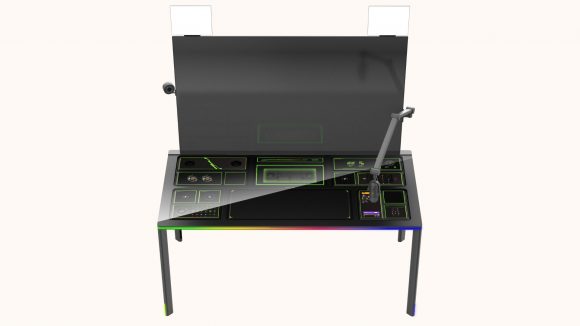 Swapping things around in seconds certainly sounds like the future, but we do have some concerns.

Firstly, the screen’s 65 inches wide, which is just a little overbearing given the distance you sit from it. Then there’s the question of proprietary connections. If Razer uses its own solution, you could be locked into specs of its choosing and not able to easily replace it or add multiple displays. The sheer size of the screen also limits where you can attach modular gadgets, with the lights above potentially casting unflattering shadows and the webcam too far to one side, framing things poorly.

Since this is just a concept, it might not even come to market, but Razer makes a concerted effort to bring desired products to life – just look at its Zephyr mask from last year and the Enki Pro Hypersense gaming chair that spun off from Project Brooklyn. Should we see the Razer Project Sophia gaming desk eventually make it to stores, here’s hoping the snake-headed company’s mad scientists work out any and all kinks.

If you like this, check out the Razer Smart Home App and the Razer X Fossil smartwatch, both of which debuted at CES 2022.