This month, Rust is getting a feature that players have been asking for since the game launched, way back in 2013. Ever since the first gang of naked, screaming barbarians tore down the first painstakingly built shanty fortress, players have wanted a way to get from point A to point B faster and more efficiently. And while horses, minicopters, and boats have all made their way into Rust’s world, they’ve served mainly to whet players’ appetites for the rustiest vehicle of all: the automobile.

Those finally have appeared in Rust’s July update: engine powered, four-wheeled vehicles that you can use to transport yourself, your friends, and anything you’ve been able to steal from one site to another. Because this is Rust, however, of course things aren’t nearly that simple.

For one thing, the vehicles are modular and can be customised to suit your specific purpose. If you’ve got a warband ready to go break things on the other side of the map, you can put together a nice long transport van with plenty of seating. You can move raw materials around by attaching a flatbed, or fill up a water tank to supply a remote base. A vehicle lift can now be built at the compound, and you can use a hammer to pound whatever parts you want onto your rickety chassis.

However, when you first come upon these vehicles, they’ll be in sorry shape. You’ll need to fix any broken modules and replace missing ones, and fill the old heap up with fuel, before you can take it anywhere. Once you do though, all bets are off: keep your jalopy full of fuel, and you’ll be able to outfit it with better engine parts and versatile new modules. 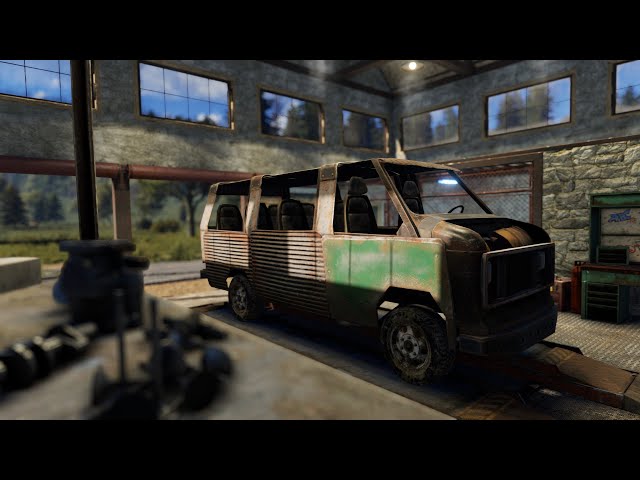 Game designer Helk tells us the beta testing with cars has been joyfully chaotic, which seems to be the case for most things in Rust. Beta testers took to the new vehicles right away.

“They were very excited to finally get their hands on a four-wheeled vehicle,” he says. “During our own testing we would often observe players taking joyrides, doing donuts at the airfield, and using the vehicle horn to create ‘music‘.”

It’s taken some time to get this update right. Not only are cars a hotly anticipated feature that players have been waiting on for years, they’re also extremely complex. The team at Facepunch has had to repave roads and squeeze every possible millisecond of input lag out of the control scheme to make sure driving in Rust felt fun and convincing.

Still, players have found ways to throw wrenches into the works, and that’s kind of the point with Rust.

“We’ve seen every configuration imaginable,” Helk reveals. “We’ve found many players tend to opt for performance by putting on multiple engine modules, often resulting in flying off the roads. The most valuable information we’ve taken is that our beta players always find ways to break anything and everything they possibly can!”

Helk says players have worked out configurations that function as muscle cars, able to escape patrolling helicopters, while others are content to slap together a few modules on a long-frame chassis as long as they have enough space for a big raiding party.

“I personally opt for the fully armoured vehicle configuration,” he says. “I’d say the most important component would be installing a lock – and my tip would be to make sure to use it.”

Where there are cars, there are races, and we asked Helk if there were any plans for a Rust Grand Prix.

“I have no doubt that the Rust modding scene will make this a reality before you know it,” he said. “They’re extremely inventive and we’re constantly amazed at the creativity found on modded servers, as well as at their dedication and technical skill.”

As for what’s next for Rust, Helk says to stay tuned. “All I’ll say is, don’t be surprised if some more RPG-like elements appear in the game in one of our upcoming monthly patches,” he said.