After a few sly teases, Devolver Digital and Flying Wild Hog have announced Shadow Warrior 3, the latest instalment in the adventures of wise-cracking warrior Lo Wang. The revival of a 1997 3D Realms game built in Duke Nukem 3D’s Build Engine, the new Shadow Warrior series has been flashy, bloody, and packed with some terrific shooting and slashing.

In the new gameplay trailer that debuted at Devolver’s annual showcase, Lo Wang shows off some new moves and gear – he’s picked up wall-running from Titanfall and Star Wars Jedi: Fallen Order, as well as a versatile new grappling hook that can help him cross gaps or deal with enemies in fun new ways. But game designer Pawel Kowalewski tells us Flying Wild Hog is also stepping back from some of the experimental steps into loot-shooting taken in Shadow Warrior 2.

We got a chance to pick Kowalewski’s brain about Shadow Warrior 3 and what we can expect when it comes out early next year.

PCGamesN: When we left Lo Wang last time, he was being swallowed by a dragon that flew out of the shattered gates of a soul well. How do things start off in Shadow Warrior 3?

Pawel Kowalewski: Well, to be accurate Shadow Warrior 2 ended with a “cut to black” the moment the dragon was about to attack, so we can’t be 100% sure that Lo Wang was in fact swallowed by the creature, right? Shadow Warrior 3 will certainly answer this question.

The story takes place some time after the events of the previous game (enough for Lo Wang to grow his hair back). The Dragon that was released from its eternal prison is now enraged and his presence in our world threatens all of existence. Lo Wang and his former enemy turned ally, Orochi Zilla, embark on a quest in search of means that will help send this world-destroying creature back to where it came from. 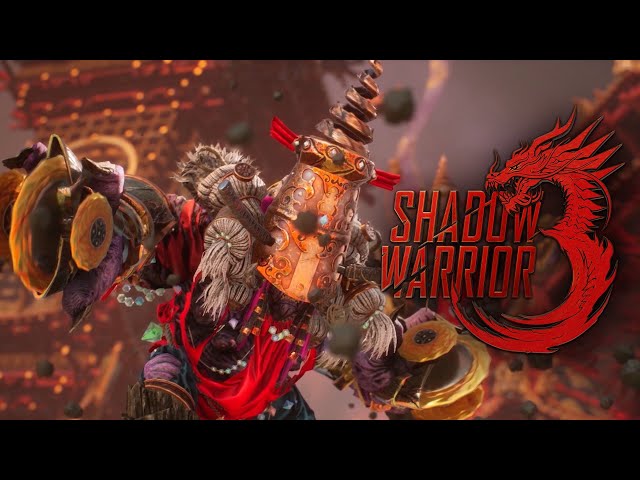 Shadow Warrior 2 featured a huge array of weapons with elemental types and perks. Will Shadow Warrior 3 be returning to a more constrained set of weapons and upgrades? How is that going to work?

Yes, Shadow Warrior 3 goes back to a more traditional approach for player loadout more suitable for single player action-packed campaigns. Thus it includes a more refined set of weapons and abilities, but each piece has its meaning within our combat space. Also, the upgrade system for acquired equipment goes back to a much simpler form – we didn’t want it to be too complicated so that it does not draw players’ focus from the action element of the game.

Each new Shadow Warrior game is in many ways an improvement of the previous one. Shadow Warrior 3 is an evolution especially when it comes to character movement. We really liked what we achieved with greater character mobility in Shadow Warrior 2 (by adding aerial dashes, double jumps and wall climbing) which allowed us to build more vertical levels and bring the fight from the ground to rooftops. Shadow Warrior 3 expands movement options further by adding wallruns and a grappling hook in order to give the Player the “ultimate ninja experience”.

Melee combat, which we all love and was always an integral part of the franchise, also keeps evolving. We’ll be talking more about this aspect of the game in the future but it’s worth noting that Lo Wang’s katana has its own attack button now (separate from the one that fires the guns) which allows for seamless blend between melee and ranged playstyles – something we were always searching in previous games and we feel we finally nailed it! 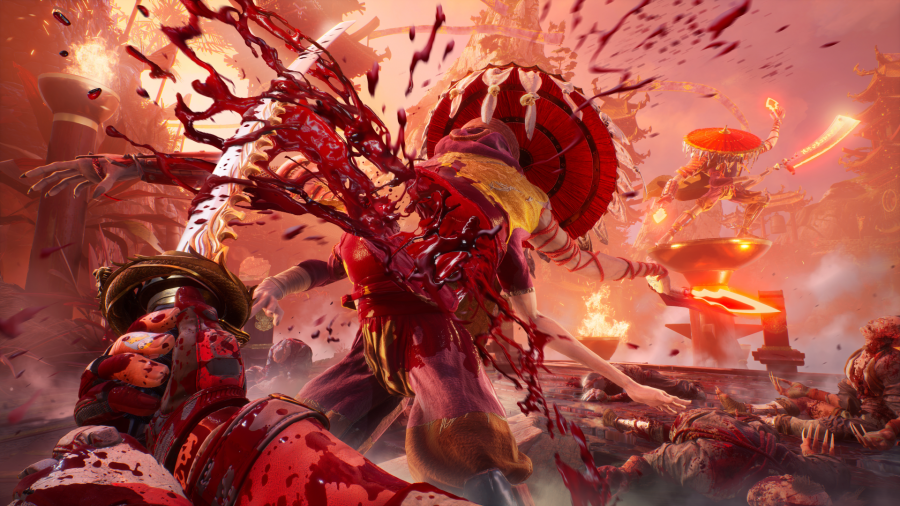 We feel that the true charm of Shadow Warrior lies in its focus on over-the-top action and a charismatic protagonist, so in order to focus on these elements we decided to go back to the roots of the franchise and the roots of our studio – as you may remember our first games, Hard Reset and Shadow Warrior (reboot) were a single player, laser-focused experiences that paid homage to the golden era of the 90’s shooters but updated it with contemporary visuals and features, and this is the direction we wanted to go back to with Shadow Warrior 3.

The reveal and gameplay trailers have more than a little Sekiro going on – is Shadow Warrior 3 going to be poking fun at it, or is it more an homage? And that enemy is the Guardian Ape, right?

Ever since we started working on the Shadow Warrior franchise we’ve taken inspiration from various sources related mostly to Japanese and Chinese culture, with the Sengoku era (that Sekiro was also influenced by) being one of the many references thanks to its status as one of the most interesting time periods for Japanese architecture. With that being said we’re not referencing any particular game, but rather a certain aesthetic.

As for the enemy in the demo – it’s in fact more of a re-imagination of Warlord (the enemy type we introduced back in the Shadow Warrior reboot) mixed with Ripper – a large gorilla-like creature from the classic 1997 Shadow Warrior.

Tell us a bit about the grappling hook. We saw it used for traversal, manipulating the environment, and combat in the gameplay trailer. How crucial is it to Shadow Warrior 3, and how did it change your approach to level design?

The Grappling Hook is one of the first new features we worked on. At first its primary function was to use it in traversal sections for pulling the Player toward anchor points or swinging under them in order to travel over huge gaps. With this new feature working as intended and the new ability for running on walls, we felt confident about making our levels (including combat arenas) more vertical than ever before, allowing the Player to approach enemies from various angles and move freely as a ninja! 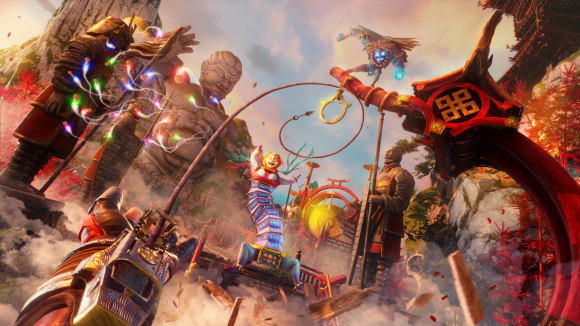 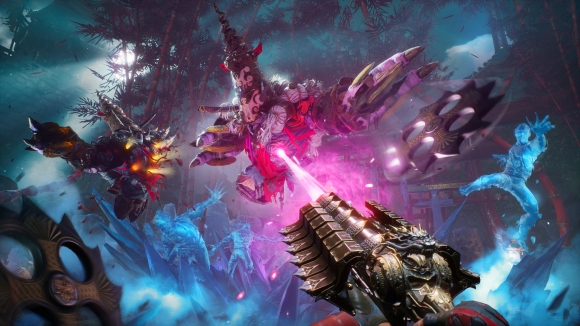 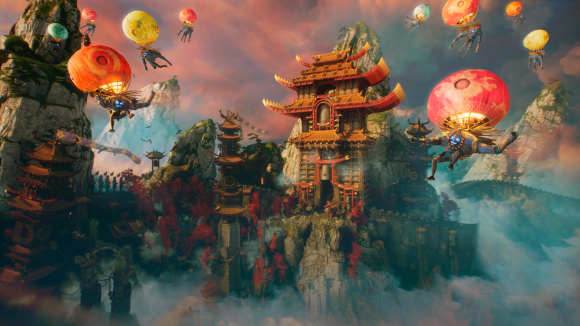 But we didn’t want to stop there, so we started thinking about the Grappling Hook as a crucial multi-functional tool, adding the ability to quickly reduce distances between the Player and the enemies, pull enemies towards the player, or reposition certain environmental objects (like explosive barrels) that they can pull and throw into groups of enemies. The Grappling Hook can be also used to activate certain devices from a distance or for collapsing objects (i.e. turning certain platforms into surfaces for wall running).

When re-designing Lo Wang we made a conscious decision to update him as a younger, more switched on character that would be more appealing to today’s audience and shifted the humour more toward pop cultural references that Players can relate to, like movies and video games. Humour is an integral part of the series, and we never want to lose that, but both we and Devolver agreed back in 2012 that much of the “humour” in the original game simply doesn’t belong in the games we make today.

Any plans for multiplayer, either PvP or co-op? If not, what made you decide to focus exclusively on a single player experience?

We planned Shadow Warrior 3 as a single-player game focused on over-the-top action and our charismatic protagonist from the very beginning. We believe that a more streamlined level structure, less complex upgrade system and putting the player in the role of that single hero who is up for the task of saving the world, works better for the story we want to tell with this game and the spectacular action elements we’ve prepared for the players..

Very important: Will we be getting a new Stan Bush song for the soundtrack?

Nothing to confirm at this point, but assuming Stan still has enough of “the touch” and “the power”, let’s keep our fingers crossed and hope for the best!

The Shadow Warrior 3 release date is set for sometime in 2021.