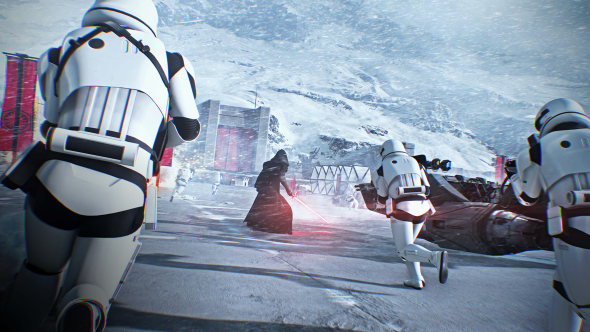 2017 is the year of Star Wars (again). Not only do we get the eagerly anticipated second movie in the saga’s third trilogy, but we also get a brand new Star Wars Battlefront game. And with a name like Star Wars Battlefront II, it better be as good as the last game to hold that title, otherwise there will be a great disturbance in the Force.

Need to know what the developers at DICE have in store for Star Wars Battlefront II? Look no further than the words below, which contain everything we know about DICE’s forthcoming second Star Wars game.

Not long left to wait, the Star Wars Battlefront II release date is November 17. That puts it almost a whole month in advance of Episode VIII: The Last Jedi. EA used a similar release schedule for the first Battlefront, and marked the release of The Force Awakens with some movie tie-in DLC. There’s a similar move happening this year – a pre-order will nab you some Kylo Ren and Rey skins from The Last Jedi, plus some ability modifiers.

If you’ve got an Origin Access subscription, you’ll be able to play a week early, which means the very earliest you will be able to play Star Wars Battlefront II is November 9. If you would like to play early but do not fancy subscribing to EA’s service, a pre-order of the Elite Trooper Deluxe Edition will allow you access from November 14. 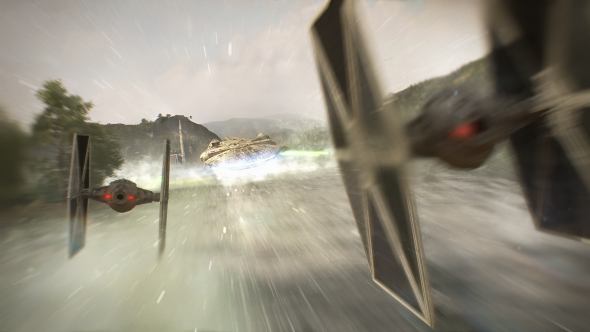 Star Wars Battlefront II will be set across all three eras of Star Wars, from the Republic days of the prequel movies, right up to to the age of the First Order and the Resistance. This means that not only will we be seeing classic trilogy planets such as Hoth, Tatooine, and Yavin IV, but also the likes of Kamino, Geonosis, Hosnian Prime, Scarif, and Jedha. We’ll also be playing with the relevant technologies and characters, so you’ll almost certainly be able to try out the new Stormtrooper F-11D blaster rifles and (hopefully) the Z6 riot control baton.

Star Wars Battlefront II multiplayer will mix some elements from the different eras together, namely when introducing Hero characters and their signature vehicles. So while you will always play as droids against clones if the map is Naboo, Boba Fett can join the fray despite having not been born by that point in the Star Wars timeline.

Unlike its predecessor, Star Wars Battlefront 2 will have a single player campaign. It sounds incredibly interesting, too: rather than casting us as the typical Rebel good guys, the Star Wars Battlefront II campaign is seen through the eyes of the Imperials. The story spans 30 years and places you in the uniform of Iden Versio, commander of the Imperial black-ops team Inferno Squad.

Taking place after the destruction of the second Death Star as seen in the final act of Return of the Jedi, the campaign will work as a bridge between the original trilogy and the latest trio of films. Versio and her team will be seeking revenge for the death of the Emperor, and will come face-to-face with a variety of familiar characters on their journey.

The story is being co-written by Walt Williams, who is most famous for Spec Ops: The Line, a game which has been continually praised for its non-typical look at the darkness of war. He seems a pretty good fit for a story about the galaxy’s bad guys and their battle against the terrorist Rebels. Whatsmore, LucasFilm themselves claim that the tale of Inferno Squad is vital to the Star Wars canon: “The story of Battlefront II is absolutely an essential story,” Steve Blank, creative executive at LucasFilm, said. 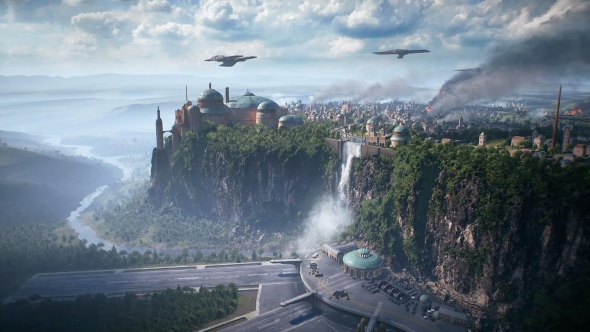 DICE have announced a few of the planets that we’ll be fighting over in Star Wars Battlefront II’s 18 multiplayer maps. Theed (capital city of Naboo), Takodana, Starkiller Base, and Yavin IV will feature, as well as returning worlds Endor, Tatooine, and Hoth. Each Star Wars Battlefront II map will dictate the look and design of character models. For example, battles on Theed will feature Battle Droids and prequel-era equipment, while Starkiller Base will pit the Resistance against the First Order.

The shiny, new Star Wars Battlefront II mode is Galactic Assault, a gametype that’s split over two phases. The first phase involves an attacking team escorting a vehicle and, should they succeed, phase two sees defenders repelling the assault in a newly unlocked section of the map. The mode was shown off at E3 2017, and you can see an entire match being played in the video above. On this Naboo-set Theed map, the Separatist droid army must escort an ATT through the streets of the city in phase one, before storming the royal palace in an incredibly close-quarters second phase.

If you prefer you battles up in space like the Battlefront games of old, then Starfighter Assault is the mode for you. An objective-based mode split over three phases, our hands-on at Gamescom saw us attack the Imperial Fondor Shipyards from the cockpit of a Rebel X-Wing. Like Galactic Assault, you need to push through defences before you can strike at your main objective; in our case it was Light Cruisers, a set of shield generators, and a multitude of other players in TIE Fighters.

Star Wars Battlefront II will be expanded with DLC over time, but EA have yet to reveal what these additions will be. The first game had a solid variety by the end of its DLC run, including Drop Zone, Extraction, Cargo, and Droid Run, so it wouldn’t be a surprise to see some of those return. 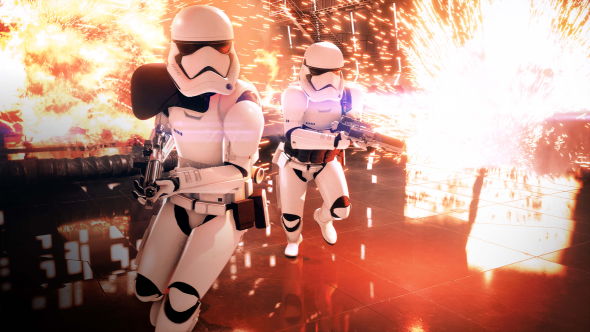 This time around, Star Wars Battlefront II will be using a class-based soldier system, akin to its DICE stablemate Battlefield. Playing as a specific class will unlock new abilities and upgrades, and increased experience with a class will gain you access to new weapon mods and improvements. It sounds a deeper alternative to the simplistic card loadout system of the first game, and having multiple roles should make it easier for you to find your own combat niche.

There are four main Star Wars Battlefront 2 classes. Assaults are all-rounders; essentially your classic Stormtroopers and Rebel soldiers. Heavies bring in big weapons like rapid-fire lasers, and can use a combat shield to defend themselves. Specialists are hunters, equipped with sniper rifles, deployable traps, and the ability to reveal enemies on the map. Finally, Officers are a supporting class that can buff and heal allies, and build automated sentry turrets.

There are a second set of advanced, special classes too, but these must be unlocked by spending Battle Points. Scoring kills, assists, and fulfilling objectives will earn you points, and these can be spent on a variety of things during a match. Special classes cost around 2,000 Battle Points, and include the jetpack-using Clone Jumptrooper, and Super Battle Droids.

A key component of Star Wars Battlefront II is its vehicles, and the sequel will be widely expanded with not only new rides for the original trilogy era, but complete fleets for the newly added prequel and new-era trilogies, too. Expect to see notable emphasis on starfighters thanks to the new space battles, but also new ground vehicles as well.

The Naboo-set Theed map, shown off at E3, features the droid AAT-1 hovering tank, as well as a fun AT-RT walker platform that turns Clone Troopers into mini mech-style menaces. Up in the sky, N-1 Starfighters and V-Wings engage in dogfights with Vulture droids.

All of these pale in comparison to the news that we’ll be able to ride on the back of a tauntaun on Hoth, though. Hopefully cutting it open to hide inside its warm guts won’t be a mechanic.

The vehicle pick-up tokens from the first game are gone and will be replaced with the Battle Points system. You can earn points by scoring kills and completing objectives, and then spend them on unlocks. This has been implemented to make sure vehicle use is fair for everyone, not just those who want to camp in the areas where the vehicle tokens spawn. The new system will include both vehicles on-map that must be climbed into Battlefield-style, and the spawn-in-vehicles akin to the previous Battlefront. 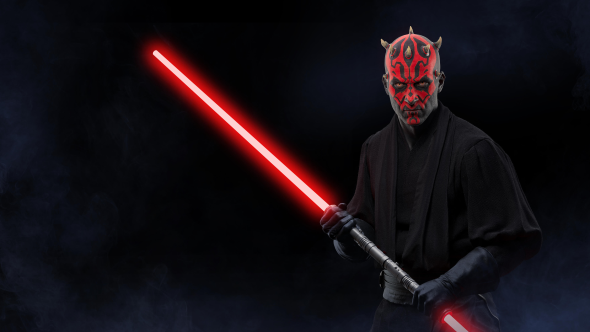 As seen in the E3 demo, Darth Maul is an energetic fighter with a spin attack that propels him forward, as well as a classic Sith choke hold move. Rey has the ability to perform a Jedi mind trick and confuse enemies, while Boba Fett can fire barrages of rockets from on-high thanks to his jetpack hover.

Like vehicles and special classes, Star Wars Battlefront II heroes and villains are unlocked using the Battle Points system, and cost 5,000 points to use.

As a novelty, Battlefront II will allow the merging of characters from different eras. Sure, it’s not canon to have Rey face off against Darth Maul, but who wouldn’t want to know the outcome of that lightsaber duel?

Like many multiplayer shooters, Battlefront II will be expanded with new maps and modes over time. Importantly, all Star Wars Battlefront II DLC will be free; you will not pay anything for any of the expansions. Yup, that means no season pass, and no splitting of the playerbase.

We do not know the full Star Wars Battlefront 2 DLC schedule, but the first batch will include The Last Jedi-themed maps, heroes, weapons, and vehicles, with the first new heroes being Finn and Captain Phasma.

With no paid-for DLC to finance it, Battlefront II will instead be making money via microtransaction loot boxes, or “supply crates”. These Star Wars Battlefront II loot boxes, which can also be earned in-game by playing matches, will contain random assortments of cosmetic cards. You can also find Star Cards in them, which are used to add new abilities to your classes and hero characters.

Like many other games that use this system, cards are ranked as common, uncommon, rare etc. Crafting components, which can also be found in crates, can be used to upgrade Star Cards to ‘Epic’ level – while you could find these Epic Star Cards in crates in the beta, DICE and EA have removed them from Star Wars Battlefront 2 loot boxes after heavy criticism from their community. Another aspect of these loot box tweaks means that players will have to reach a certain level before they can craft upgraded Star Cards. Finally, DICE plan on basing Star Wars Battlefront II loot boxes on your playtime with different classes, so if you earn a supply crate primarily with Assault classes, then your rewards will be geared towards that setup.

But all of this is academic, if you just want to see the game in action then here are some Star Wars Battlefront II trailers. First up, the launch trailer, which serves as ‘best of’ glimpse of what is to come – watch it below.

Finally, have a look at the below trailer for a teaser of the highly anticipated Star Wars Battlefront II campaign.

Can you run it? Check your PC against the Star Wars Battlefront 2 system requirements 2021 on PCGameBenchmark.

That’s everything we know about Star Wars Battlefront II so far. We’ll be continually updating this post as our Rebel spies smuggle more intel from the data points, so be sure to check back regularly.