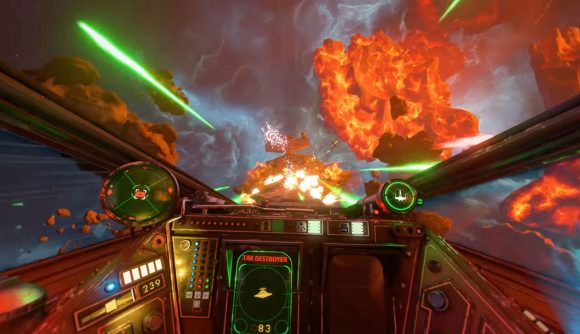 In an interview with GameInformer (ta, GamesRadar), Motive Studios creative director Ian Frazier made it clear players are only being asked to pay one to jump into the cockpit. “We’re trying to say with this game that we have a $40 price point, we want to feel generous to players, and we want it to feel like a complete experience,” Frazier said. “Like, ‘You gave us your $40. Here’s a game that you will love. Thank you.’ That’s it.”

Frazier elaborates by specifically comparing Squadrons to the games-as-a-service model that’s increasingly common, stating that’s just not how this project has been built. “This isn’t something we are building around a live-service strategy. It’s built around a game that is complete and great in its own right,” He said. “That’s not to say we will never add anything, I guess we could, but it’s not presented as a live service.”

Star Wars: Squadrons writer Mitch Dyer took to Twitter to double-down on this, tweeting “zero microtransactions” in all-caps just to really drill home the point. Skepticism here isn’t unwarranted, given EA’s stance that loot boxes are “surprise mechanics”, but it sounds like the publisher learned something from 2015’s Star Wars Battlefront 2, and the harm the negative buzz around that game caused its developers. Squadrons sounds like it will be more in-line with Star Wars Jedi: Fallen Order, where it’s the full game day one, and anything additional will be just that.

There’s been a steady flow of information on Star Wars: Squadrons since the reveal earlier this week. So far we’ve gotten the roster of ships, and a look at all the panels you’ll be managing in the varios cockpits. Star Wars: Squadrons attacks the Epic games store, Origin, and Steam on October 2.