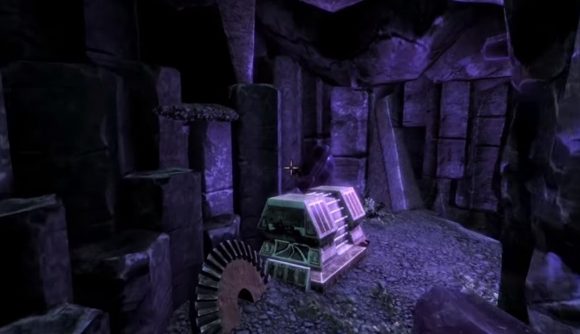 After a year, we’ve got a new gameplay trailer for Skyrim mod Skywind, which is building Morrowind in the Skyrim engine. The 15 minutes of footage takes us on a short tour of the modding team’s progress on the RPG game.

Shared on Reddit by team-member Egrets, the video is a self-contained quest from Morrowind, ‘Battle at Nchurdamz’, redesigned to look and feel more contemporary. Everything is smoother, the writing’s been fleshed out a little more, and the actual mission itself contains some extra sections. A new puzzle’s been added, as have some bits and pieces of exploration to make the whole thing feel a touch grander as the hero heads towards the climax, a battle against the cave-dwelling troll Hrelvesuu.

The conversion is looking impressive. Some of the colours and lighting in the second half, the purple and red glow as it goes deeper into the dungeon, are particularly eye-catching. The odd, angular charm of the early-2000s is maintained in the overhaul, the end product looking and sounding, so far at least, just like we fondly remember, but modern and sleek all the same.

This isn’t the only fan-remaster of Morrowind – extensive overhaul Morrowind Rebirth got a recent update, too. Some other notable Skyrim mods include becoming Superman, adding an apocalypse timer, and turning the game into Sekiro: Heroes Die Twice.

No release date as yet for Skywind, which has been in the works for a number of years now, but Egerts reassures everyone that “things are going swimmingly with steady progress made every day”. Good thing we have the best games like Skyrim, and best upcoming PC games, to make the waiting that much easier.