Sarpedon, son of Zeus and king of Lycea, fought on the side of the Trojans in their war against the Achaeans. He was one of the highest ranking heroes in the Trojan war, and in legend, fought alongside his cousin Glaucus in their attack on the Achaean encampment. His story in mythology ends at the hands of Achilles’ close ally Patroclus.

Before Sarpedon’s death, his father Zeus debates whether to save his son, but decides not to intervene. Fortunately, you are a much better guardian than Zeus (the bar is admittedly very low) and so, under your expert tutelage, Sarpedon will survive the coming wars and lead the Lycian people to glory.

Sarpedon will gain advantages through trading and stockpiling treasures and resources. Your network of trade will steadily expand as your influence increases, and you can butt in on other factions’ trade agreements to secure favourable deals for yourself. You’re the only faction who can obtain White Granite, Celestial Iron, and Minoan relics, which give you various bonuses when you have enough to distribute across your empire to better help you fight alongside your Trojan allies – and possibly reclaim your people’s ancestral home of Crete.

Sarpedon’s start is rated easy, and the game is not lying. You get loads of empty ruins to colonise in the northeast, and your starting enemy – Rhodes – has just one broken army in your territory. There’s a risk that one of your neighbours grabs the ruins before you do, though they didn’t show much appetite to do so in our experience. Nonetheless, it may be worth hiring a second hero on your very first turn to be absolutely sure of locking them down. With Sarpedon, take out Rhodes’ army and make a beeline for Mobolla, which is the last settlement you need to unify your starting province and is worryingly close to your neighbour, Triopion. Since he’s one of the few who doesn’t like you much at first and has a whole province to himself, he’s an early target, so don’t panic too much if he gets there before you do. He’ll get his, in time. 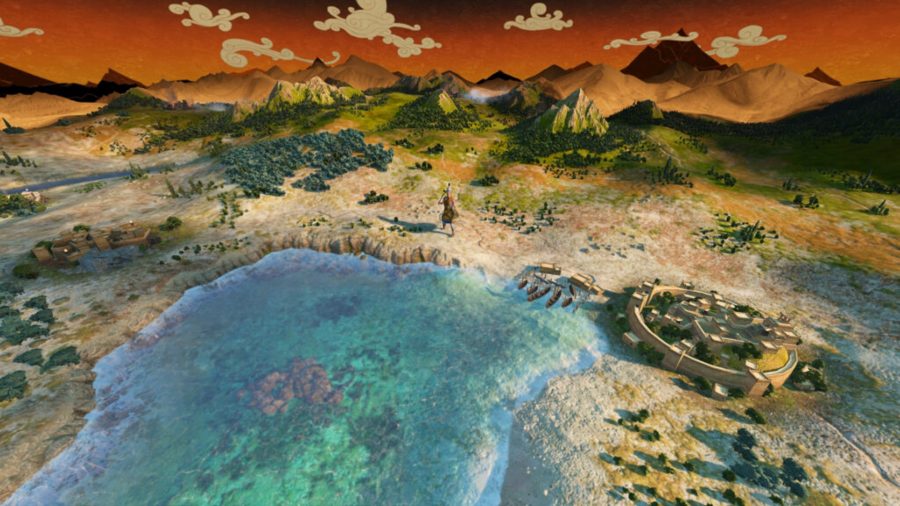 After that’s all taken care of, you can go where you like. Tlawa likes you and Peraia is neutral, so they won’t put you under any pressure, but you should conquer them both anyway since their territory is next to yours and they don’t have any friends. You can then go north to conquer some more of the mainland – you should probably go at least as far as your friends, the Carians – or west to take some of the islands and then perhaps onwards to Crete. Given your campaign mechanics, you should send some agents far and wide to meet new allies and potential trading partners. Heading north to meet other Trojan factions is the obvious choice – you’ll find fewer friends over in Greece. 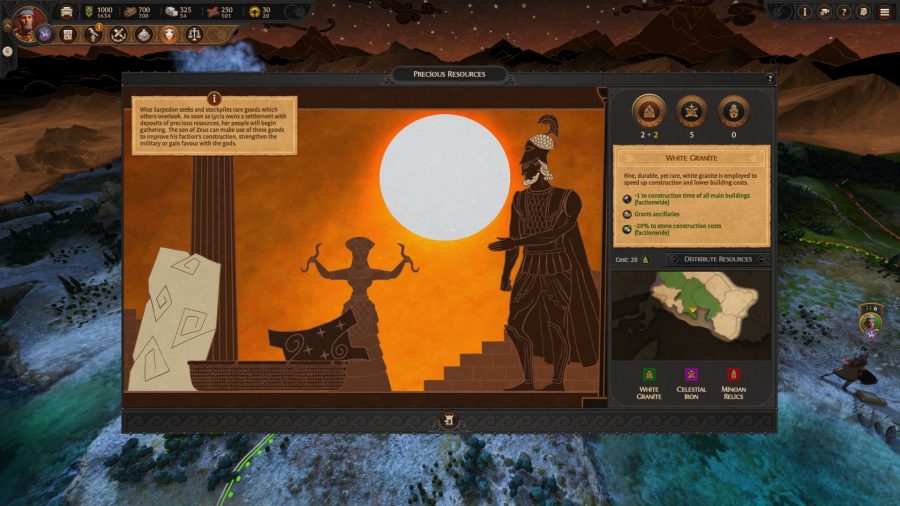 You get access to three special resources that are found in settlements across the world. Owning a settlement with precious resources automatically extracts them at a certain rate (two per turn at the start of the game) though their total quantity is limited by their deposit size, as with gold – e.g. your starting capital of Telmessos starts with a deposit of 80 white granite. When you gather enough resources (20, at least for the first distribution of each), you can ‘distribute’ them, triggering a range of buffs.

Here’s what they each do on the first issuance: 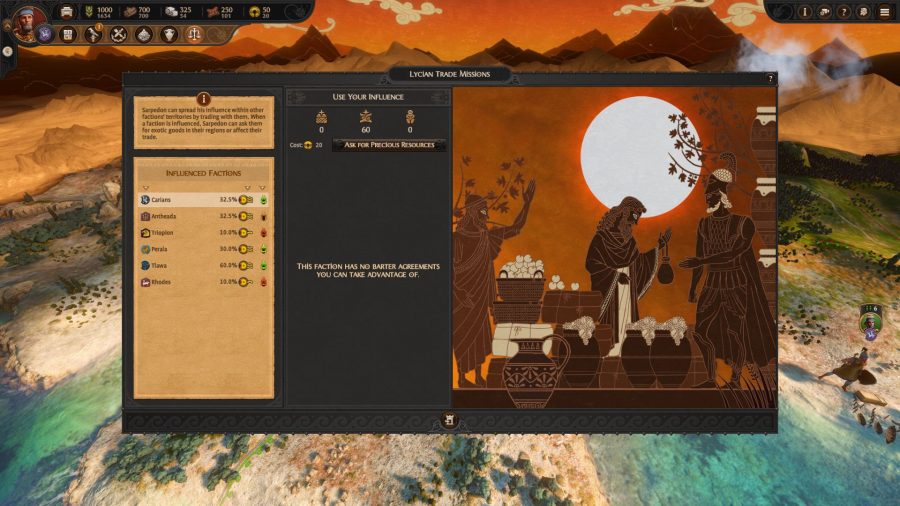 You can spread your cultural influence within other factions’ territories by trading with them. When they are influenced you can ask them for exotic goods in their regions, or even affect their trade. Trade missions screen shows the factions you’re influencing and how much by, as well as their diplomatic attitude toward you. You can browse them to see which precious resources they have in their regions and ask them to send a shipment – you get more if they control more deposits.

That should get you started on the path to victory as Sarpedon – but if you’re looking for a different challenge, see our Hector guide, Paris guide, Agamemnon guide, Aeneas guide, Achilles guide, Menelaus guide, and Odysseus guide. Alternatively, if you’d like to test your tactics against great nations of other eras – futuristic, historical, or fantastical – we’ve got a list of the best strategy games on PC.