Odysseus is one of the trickiest heroes to play, with a (mildly) challenging start position, micro-heavy battle style, and some very weird campaign mechanics that render all inland territories effectively worthless to you. But that’s also what makes him so different from everyone else, and so rewarding when you play him well.

As Odysseus, you can only upgrade the main building chain in any region that isn’t on the coast. This means conquering great swathes of land isn’t really the way to go, so your focus should probably be on the Homeric victory – follow Odysseus’s quest line, and sneak into Troy with his unique Trojan Horse mechanic to make the siege /much/ easier on yourself. You can try confederating some of the smaller Greeks when you get strong enough, but obviously prioritise those with coastal territory.

You start with a spy, so send him out along the coast of Greece, out to the islands (perhaps via Crete, if Menelaus hasn’t got there already) and then on to Troy. Have them establish safe havens in all the territories you’ll ultimately seek to settle, and you’ll be able to replenish your losses or raise secondary armies immediately regardless of whether the settlement you take has any military infrastructure. This is Odysseus’s main strategic advantage and will be really helpful when taking on the tougher opponents.

Odysseus starts in Cephallenia, a chain of islands off the eastern coast of Greece. You’re about as far away from your real enemies, the Trojans, as it’s possible to be, but your start position is nonetheless rated ‘hard’, presumably because there’s no obvious place to go next, and because of your neighbours, the Teleboans.

The Teleboans are a bit of a pain. It’s no trouble taking out their first army and then Kranioi, but their final settlement of Hyrie is tough to finish as it will keep pace with your recruitment. Therefore, hire a second hero to out-recruit them and maintain an advantage. Whenever Odysseus isn’t recruiting – he has at least two turns at sea when he can’t – your second hero should be, and should then join Odysseus in laying siege to Hyrie. It’ll be close but you should outmatch them even in auto-resolve. You can then dismiss the second army to save on resources. 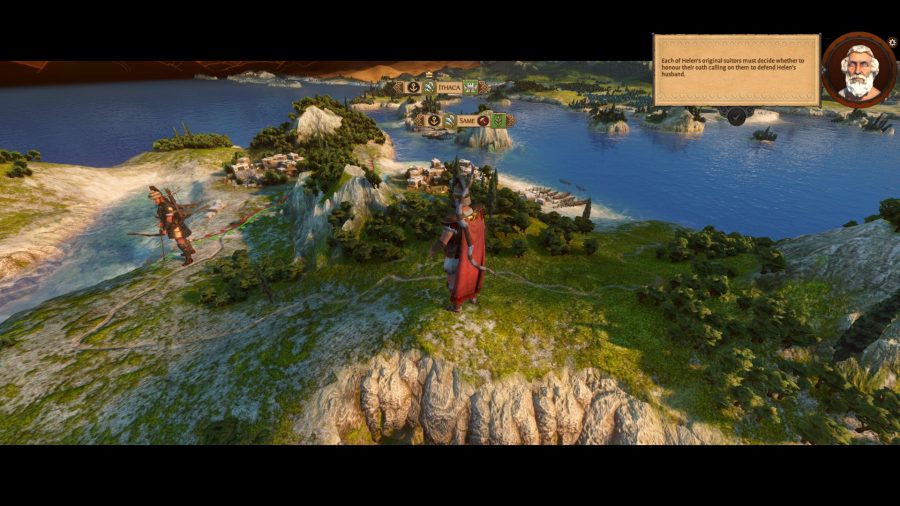 From here, Odysseus can go pretty much wherever he wants. Everyone on mainland Greece is either neutral or friendly, so analyse the situation and pick your conquests carefully. Odysseus’s mechanics mean there is absolutely no point in going inland, so we suggest the southwestern coast of Greece as an obvious place to start. Beyond that, look to the many islands of the Aegean Sea for rich and useful coastal conquests that aren’t held by powerful allies (and potential confederation targets) such as Agamemnon, Achilles, and Menelaus.

If you fancy a bit of role-play – and are feeling ambitious – sail to the far southwest of the map. There you’ll find the one-settlement island region of Thrinacia, where Odysseus’s men slaughtered the cattle of Helios the sun god (big mistake) on their voyage home from Troy. The isle of Sicily, where they encountered the cyclops Polyphemus, was given the same name in antiquity, which explains why you can build a cyclops cave here at settlement level five – an amazing building that gives 2,000 food per turn. Expect the island to be well-defended, however. 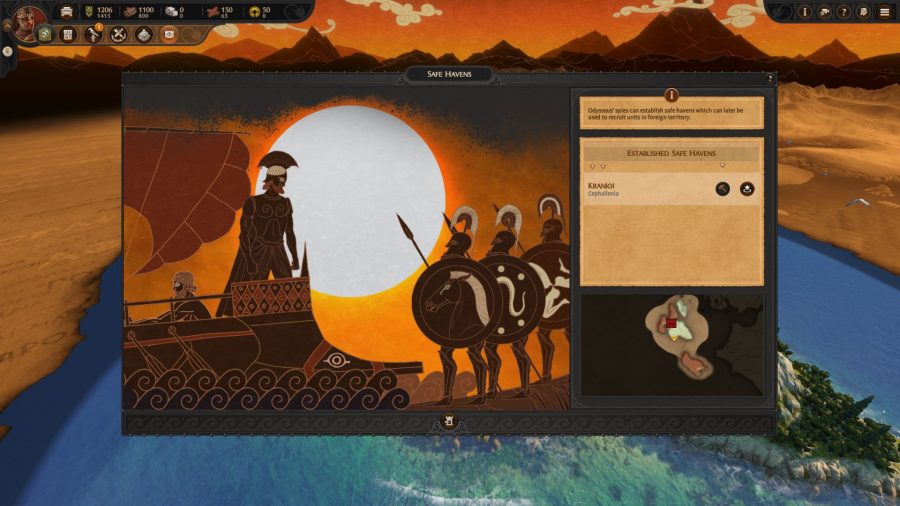 Spy agents can establish these in foreign settlements – so basically, they’re pirate coves from Warhammer 2. They can be used to recruit units in foreign territory and can be reviewed in a panel on the UI. This is great if you’re planning a big attack as you can get a headstart on recruiting. Upon establishing a Safe Haven, your spy can choose between constructing a building for warriors or skirmishers, which will let you recruit some pretty powerful allies. 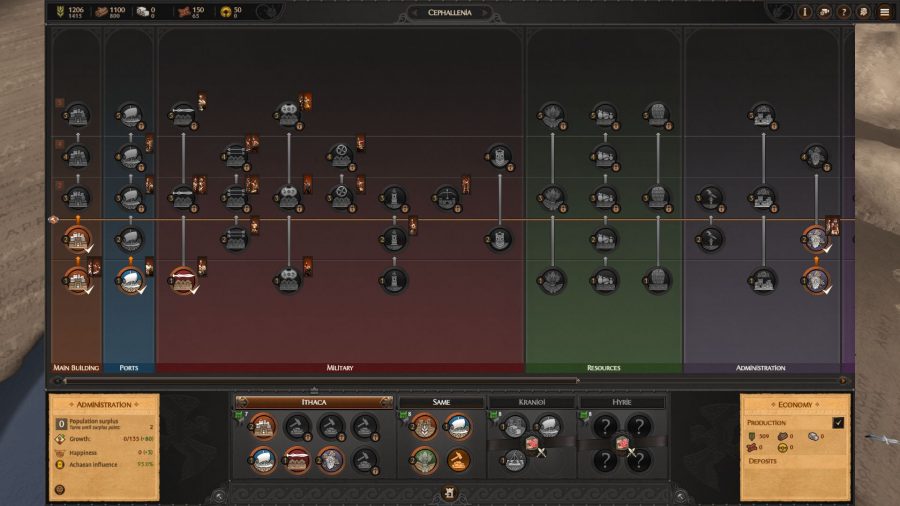 Odysseus gets access to a variety of unique and powerful buildings that can only be built in coastal settlements, whereas you are severely limited in terms of what inland buildings you can construct. Only the main settlement building can be built and upgraded in any settlement that isn’t on the coast. Woof. Weird faction.

Odysseus has a specialised roster focused on stealthy, fast-moving units best utilised in outflanking and rear charges, though the main line is strong enough to hold the enemy back while this takes place.

Odysseus gets three unique types of light javelin infantry and Odysseus’ Midnight Runners, which is a medium, two-handed spearman who can stalk and has a special missile weapon – they are experts in flanking. Odysseus cannot recruit heroes who are defenders.

To cap things off, you can also achieve a Homeric victory by doing the following:

And there you have it, a crash course in playing Total War: Troy as Odysseus. If you’re still on the fence then be sure to read our full Total War Saga: Troy review. For more info on the other Total War: Troy factions, see our Sarpedon guide, Hector guide, Paris guide, Agamemnon guide, Aeneas guide, Achilles guide, and Menelaus guide.