Achilles, glorious leader of the Myrmidons, has become best known for his tragic flaws of great pride and temper – something which, ironically enough, would probably make him incandescently angry. Known as the greatest warrior in mythology, hero of the Trojan War, protagonist of The Iliad, swift of foot and strong of arm; now it’s up to you to ensure Achilles’ victory.

In mythology, Achilles’ legendary invincibility originated from a dip in the river Styx as a child courtesy of his nereid mother Thetis – though she held him by the ankle as he was submerged, which is why that pesky arrow got through.

Never one to shy away from a challenge, Achilles’ playstyle is aggressive in both battle and campaign, where you’ll need to make judicious use of his famous mood swings to balance powerful buffs to his armies. You may think that balancing Achilles’ mental state to his basic mood (‘proud’, naturally) is the way to go, but not so – you should absolutely make the most of his instability, as his bonuses when ‘outraged’ are unbelievably good.

Achilles’ starting position is classified as ‘normal’ difficulty, but your immediate challengers, the Ellopians, are slightly tougher than most factions’ starting conflicts. They have two settlements in a unified province and two armies, so though your starting army is strong, you’ll need to do a fair bit of recruitment to keep the pressure up and take them out. Be sure to make use of the conflict to send Achilles into a blistering rage and buff your armies (see below).

As with every other start position, your short-term goals are to take out your starting opponent and unify a province or two so you can issue commandments and develop a stable heartland. Unusually, that opponent, the Ellopians, do not hold territory in your first province (taking them out gives you an entirely new one). The Magnetes, with whom you are not at war, hold the final region in your home province, which unfortunately for them makes them an obvious target. Meliboea, further to the north, hold territory in the Magnetes’ home province, and you should also note that Thessalia to the northwest are one of the few Greek tribes that really don’t like you. None of these diplomatic situations are unsalvageable, however, so once the Ellopians are taken care of, it’s really up to you where to go next.

With Agamemnon and Menelaus to the south, and Odysseus miles away to the west, Achilles actually has a pretty free run at the Greek mainland. Pick your targets carefully and build your strength, fortifying your eastern coast against the eventual Trojan invasion (if you don’t go there first, that is). Note that you may want to be guided by the Living Legend mechanic, too – if a potential rival doesn’t recognise your strength when challenged, you may have to go to war with them and beat them in a duel. 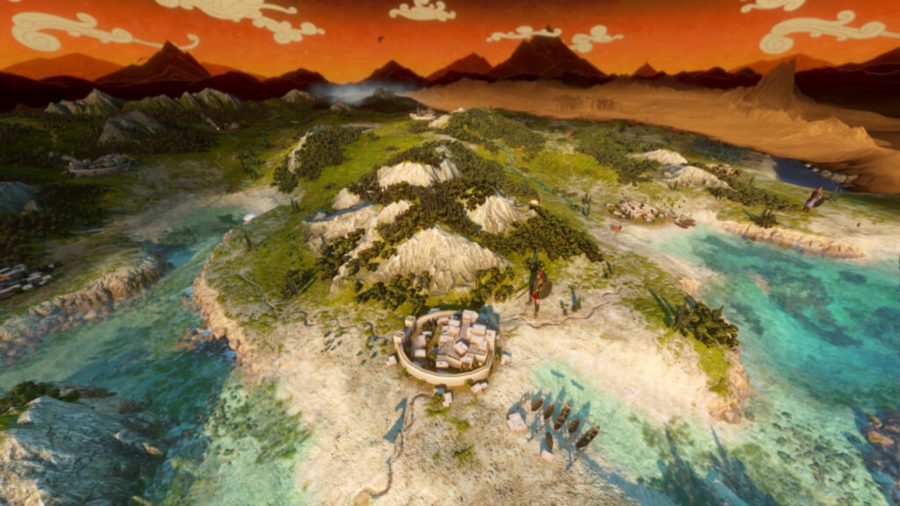 Living Legend:
In his quest to prove himself the greatest warrior ever, Achilles can challenge potential rivals after he encounters them during a campaign. He can issue this challenge during battle, or alternatively command a rival to recognise him as the better fighter. In the latter case they either acknowledge his superiority right away, or respond with a challenge to a duel. He’ll win, but the outcome may affect his mood in unpredictable ways – a rival refusing to acknowledge Achilles’ superiority will send him down the path to fury. When all rivals are defeated, Achilles is considered a living legend by all. This grants powerful bonuses that will remain until he encounters a new challenger: 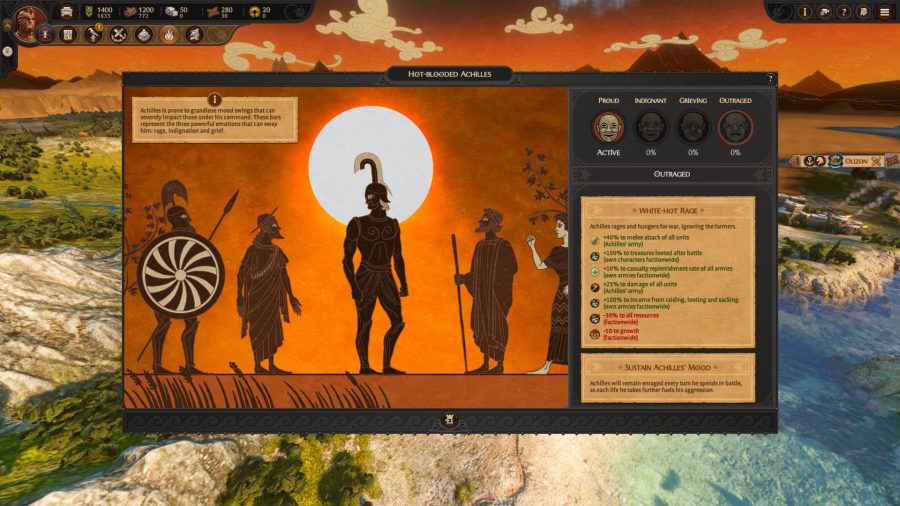 Hot-blooded Achilles:
Achilles has four possible moods that can affect everything from population happiness to his armies’ damage dealing abilities:

Achilles’ roster focuses on speed, manoeuvrability, and versatility. Though he can’t recruit Warlord type heroes, he has the largest number of faction unique units:

Armed with this knowledge, you’ll make swift work of your unworthy foes – for our full impressions of the game, check out our Total War Saga: Rome review. For more hard fought battles of epic consequence, see our guide to the best strategy games on PC – just watch out for archers. For more information on the other faction leaders, see our Sarpedon guide, Hector guide, Paris guide, Agamemnon guide, Aeneas guide, Menelaus guide, and Odysseus guide.