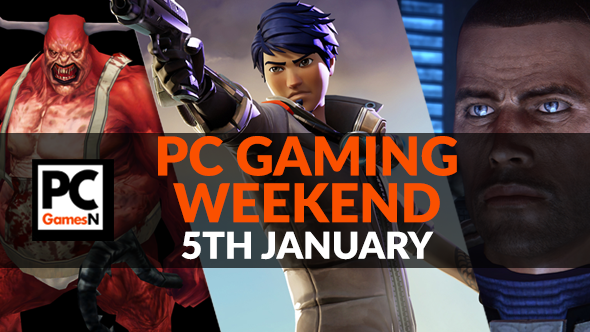 Happy New Year! Yes, here we are, the first weekend of 2018 – let’s make it a special one by playing some PC games, yeah? This time around we have a glamorous Darth Vader skin to slip into, a huge expansion for a strategy game classic, and a 21st birthday to celebrate. Let’s get to it!

Win a XO Pack for post-apocalyptic vehicular-action MMO Crossout – we have 500 codes!

Crossout is all about gathering resources to improve your post-apocalyptic battle machine, making it tougher and quicker with each new rusty addition. To help you out with that, we are giving away 500 goodie packs for the game – enter for a chance to win.

Fortnite has a new game mode but it isn’t sticking around for long. Called Sneaky Silencers, it’s all about keeping quiet as you shoot down your foes with the new silenced SMG and pistol.

What happens if you say you can’t have cosmetics in a Star Wars game because it would break canon? The answer: a fan is going to make a pink skin for Darth Vader just to spite you. That is what happened here. Enjoy the glamourous Vader while you can.

Jump into the new, huge fan-made expansion for Heroes of Might and Magic III

Heroes of Might and Magic III is one of the all-time classics of the turn-based strategy genre. It’s great to have a reason to dive back into it, then. The fan team behind the huge Horn of the Abyss expansion has released a new update for it.

Diablo recently turned 21 and that means, in North America at least, it can now drink alcohol. To celebrate this new age, Blizzard have brought back the Darkening of Tristram event, which lets you essentially play a portion of the first game inside Diablo III, in full retro style.

Diseased cultists and a necromancer who is looking to unleash an undead dragon onto the world. These are the biggest threats you will find in the two new dungeons inside the Dragon Bones DLC for The Elder Scrolls Online. There are also new PvP arenas and other tweaks as we outlined in the article linked above.

Did you either purchase or re-download the first Mass Effect game recently? If you did, here’s something worth your while: a fan-made texture pack has been updated to further bring the sci-fi epic into the present day. All that scaly alien skin looks better than ever.

Take a VR walk around Deckard’s apartment from Blade Runner

Look at some of the images and headlines in the news these days and you could be convinced that we are already living inside the polluted urban hell of Blade Runner. So why not take it further and actually step into Deckard’s apartment inside VR?

No, you cannot play Insurgency: Sandstorm yet. But the developers are now asking you to register for the alpha, which they say will be available very soon. This has been made possible as the single-player story segment of the game has been dropped in order to focus on developing the online multiplayer.

If you are fed up of what EA are doing with last year’s Star Wars Battlefront II then you can always go back to the original sequel. It’s a good time to right now, too, as it just got a big multiplayer patch that squashed some outlying bugs and improved performance.