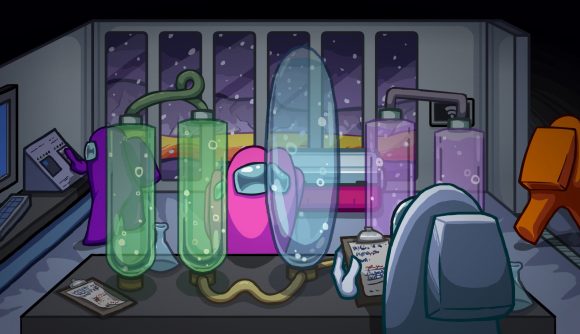 The team behind Among Us has added a shortcut wheel for fast responses while playing the social deduction game. The feature is already available, and should make those meetings quicker and easier.

Developer Innersloth revealed the quickchat in a tweet, adding that anyone relying on the text chat may find this a simpler option. “We’ve just added Quickchat (version 2021.2.21),” the tweet reads. “This is an easier, faster, and safer option to play if you’re using text chat! More info in-game.” A screenshot is attached, displaying a circle of seven options: accusation, crew, systems, location, statements, question, and response, streamlining the whole process. No “sus” button just yet.

Many players use voice chat, whether through Discord, Zoom, or otherwise while playing together, but if you don’t have that option, the chat in-game can be messy or inaccessible for whatever reason. This option helps everyone. A larger update is still planned, and the team reassures everyone this is just one sliver of what’s in the pipeline. “I know you’re waiting for the big update news too,” the Twitter post finishes. “The ball is rolling, promise I’ll get you more info soon.”

Innersloth commented on the slow release of patches and updates back in January, saying that it simply comes down to logistics of being a small team working on something that suddenly gets mega-popular. An account system, friendships, and stat-tracks are on the way. And of course, the new map, coming this year.

i know u’re waiting for the big update news too. the ball is rolling, promise i’ll get u more info soon! 🙏 pic.twitter.com/16ZDIwmWGt

We have a list of Among Us tips, and guides on Among Us maps, Among Us settings, and Among Us costumes, to keep you avoiding that airlock.