It’s late (of is that early?) in the day here in the PCGN offices but we’re settling in for Bethesda’s E3 Showcase. Looking forward to more details on Fallout 76 and some surprises… please, let there be a Doom 2.

Senior vice president Pete Hines strides out onto stage to some thrumming rock music, making it feel more like a wrestling show than a press conference. I can dig it.

Things start with a jibe against Walmart Canada known for their “low prices and ability to keep secrets” and roll straight into Rage 2 and… er, Andrew WK is coming on stage. His music is peppered through all of the Rage 2 trailers released so far.

Have a read of our comprehensive guide to get a handle on everything happening at E3 2018.

Bethesda is holding back showing the game until WK has finished performing Get Ready to Die. I respect that. Even if the crowd are not exactly going wild for it.

Song over. Tim Willits and Magnus Nedfors enter the stage and make quite the pairing: 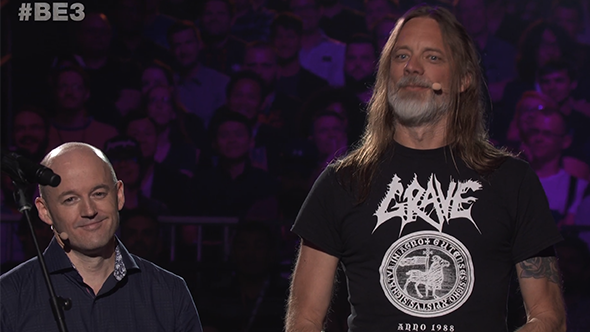 After some charmingly awkward chat we move over to a new trailer for Rage 2. We start off with a look at the driving – your car can be loaded up with missiles and energy weapons to hunt down other bandits on the road.

The action then moves into a shootout outside a faction’s base. The weapons look like they have a nice kick to them, and the bullets mulch through your enemies. We get a glimpse of Rage 2’s special abilities – the one on show is Shatter – that sees the player dash forwards and slam enemies into the air.

Next up is a man from The Elder Scrolls: Legends team to announce the game is being relaunched with new graphics. Lovely.

The Elder Scrolls Online is next under the spotlight. There will be a dungeon DLC released that will pit you against werewolves and a story DLC that takes you into the Black Marsh. This is followed by a trailer covering all the things players have got up to since the MMO launched.

It’s all been a little slow so far. Hopefully, there will be something…

Announced by a panning shot through a burning, crumbling city filled with monstrous demons. It’s DOOM: ETERNAL (I’m assuming all caps). Apparently there are twice as many demons in this new Doom. We’re going to have to wait a while for more details, as it will be debuted properly at Quakecon.

Quake Champions is kicking off a round of competitions at Quakecon and Dreamhack. The better news is that Quake Champion will free to play this week.

It’s big Prey news next – there is a free update adding story mode, New Game Plus, and survival mode. That update is out tonight. Which makes it the best sort of announcement. As well as the free update out tonight, there is also a new DLC on its way – Prey: Mooncrash.

As well as all that, there is a multiplayer mode coming to Prey called Typhon Hunter. It sounds brilliant: one player plays as a human against five players playing as mimics. It’s basically prop hunt.

Next up is Wolfenstein and Jans Matthies congratulating the crowd on “beating the fuck out of those Nazis.” This rolls into the announcement of a 1980s set Wolfenstein: Youngblood – in which you play as BJ’s twin daughters fighting the Nazis in Paris, all in co-op. It will be out in 2019.

Pete Hines is back on stage announcing two VR games and saying, to help bring the message “Fuck Nazis” to every platform possible.

Todd Howard has changed jackets between the Microsoft presentation and now. Hopefully we’ll be getting some Fallout 76 news. But first a parody:

And now onto the meat of the stream, it’s Fallout 76.

Or not. It’s the same trailer that was shown off in Microsoft’s conference. Back to Howard, who is introducing the game. You’ll play 25 years after entering the vault – so you will be meeting people who remember the world how it was before the war.

The world is full of far more oddly mutated creatures than we’re used to. The really big news is that the game is “entirely online.”You will play on servers full of players, and move between them taking your character with you. We’re then treated to a brutal trailer of what you can get up to in this new, brave world:

Jordan has broken down everything that’s in the new Fallout 76 gameplay trailer.

After that we’re shown the new building systems. You can build anywhere you want within the world and that carries between the servers. Also, check out the new Pip-Boy.

Bethesda has given us a great leveller: nuclear missiles. If you and other players can collect together all the parts of a nuclear launch code then you can fire a missile at other players’ bases on the map.

Fallout 76 will be out on November 14 and it will be getting a beta so get ready to sign up and start blasting bugs for the betterment of the game for everyone. And, to top it off, the Fallout 76 special edition even comes with a power armour helmet.

Immediately after that, Howard reveals The Elder Scrolls: Blades, a mobile game where you explore procedurally generated dungeons and slash away at enemies with your finger. It’s basically fruit ninja. It will be coming to PC, though.

Howard’s not done yet. He announced that he’s going to show us the future for Bethesda: its first new franchise in 25 years. It’s going to be bloody Starfield and…:

It’s not much to go on but, damn, it’s got me excited.

Howard’s not done, though, it’s the game we’ve all been waiting for. It’s The Elder Scrolls VI. At last! I mean, we knew it was coming, and as teasers go this was about 15 seconds of footage, but it’s good to know it’s on the horizon:

That’s it for this year’s conference and it says something about the scale of the show that a more Doom isn’t the headline piece of news. Bethesda has set up what may now be the best E3 for PC in years.