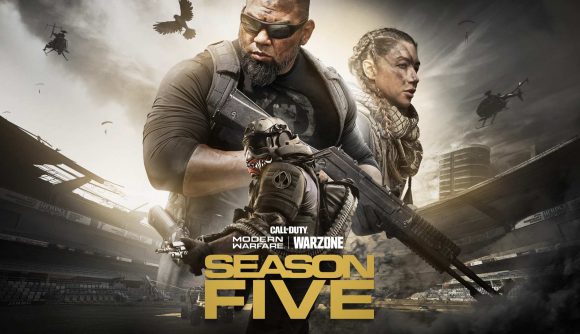 Call of Duty: Modern Warfare and Warzone‘s season five has begun, and there’s plenty of new content on the way for fans still enjoying the two games. Infinity Ward’s official patch notes and roadmap for upcoming updates reveal all the new additions, so let’s dig in.

Four new maps arrive for Modern Warfare, comprising Petrov Oil Rig and Suldal Harbour for standard modes, Verdansk International Airport for Ground War, and Livestock for the smaller Gunfight matches. In Warzone, meanwhile, a handful of Verdansk map updates mean the Stadium is opening up and the train is arriving, with a new station interior to explore, too.

In terms of new modes, the battle royale game’s playlist update means you can now try out Mini Royale Trios, a “fast-paced” variant set in “condensed areas of Verdansk”. Battle Royale Solos Stimulus also returns, except it’s now titled Battle Royale Solos Buy Back. Modern Warfare’s big new mode, meanwhile, is Search and Destroy Double Down, a 12 vs 12 variant of that particular mode. Fans of both games can try out their new weapons, the ISO and the AN-94, and their new operator, Lerch.

Later in season five, Infinity Ward plans to add another new operator, Velikan; two new weapons, the dual kodachas and another that’s yet to be revealed, and a mysterious mid-season event. That’s in addition to two new modes for Modern Warfare, Bare Bones and Ground War Reinforce, and one for Warzone, King Slayer. Phew. 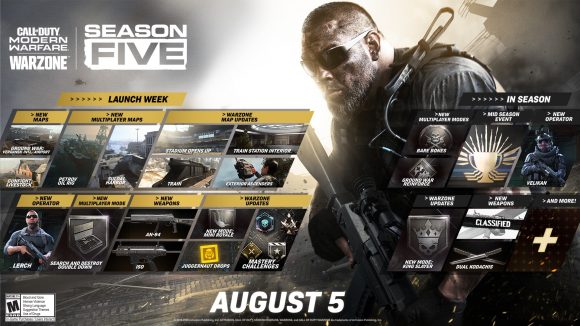 The games’ season five update is out now, with the file size weighing in at between 47 and 54GB, depending on whether you have both games installed or just one. However, the update will reduce the overall footprint of the game on your PC. Take a look at the full list of patch notes below, via Infinity Ward.

Call of Duty: Warzone’s release date is today, and its start time has already arrived, meaning you can dive in right now – so long as you’ve downloaded that big patch. And we don’t have too long to wait until the next CoD game, either, since publisher Activision confirmed recently that Call of Duty 2020 is still on track for this year, despite having yet to be revealed.