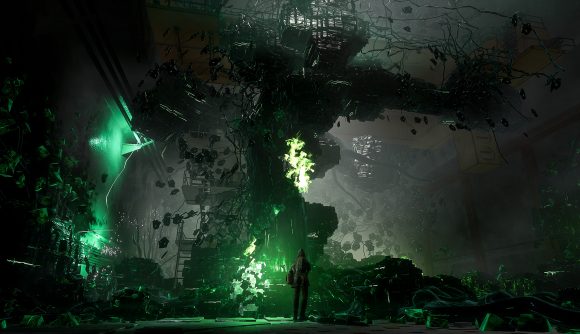 Steam’s annual Halloween sale has risen from the grave once again, with prices on the best PC games that are so low, they’re scary. Whether you’re in the mood for horror games, or you’d like to play something more Halloweeny than actually scary, Steam likely has a deal on something that would fit the bill, and we’ve gone ahead and picked out a couple standout bargains.

We’re as excited as anyone to dive into the dank roguelike depths of Darkest Dungeon II now that it’s hit early access, but if you want to find out how the dismal journey began, you can snap up the original Darkest Dungeon on Steam for 80% off the usual price during the Halloween sale. The holidays can be a stressful time, so let your intrepid party of doomed characters shoulder some of the load.

For something with some decidedly more B-movie vibes, you might try Serious Sam 4, which is 50% off during Steam’s Halloween sale. If you’re the kind of person who thinks driving around in a giant, heavily armed Popemobile mech sounds like fun, this is definitely the game for you.

Chernobylite, which came out earlier this year, is 20% off during the sale, and it’s well worth checking out. It’s a blend of base-building and survival with a kind of X-Files spin on the Chernobyl nuclear disaster, which has fascinated and frightened fans of the paranormal for the past few decades. If you’re looking for ghosts this Halloween, Chernobylite has you covered.

This is also a great opportunity to pick up Disco Elysium, the standout 2019 RPG game that got a full cast ‘Final Cut’ upgrade earlier this year. What’s scarier than being stuck inside the psyche of a washed-up detective with broken dreams and a drinking problem? It’s 45% off for the sale, which is as low as its price has ever been since launch.

🔹 DAILY DEAL🔹 Save 50% on Hunt:Showdown!https://t.co/Ychiom9VtK#SteamDeals

You also might want to consider Remnant: From The Ashes during the sale – the Complete Edition, which includes the Swamps of Corsus and Subject 2923 DLC packs, is on sale for 58% off for Halloween. That’s the cheapest the edition has ever been, and it gets you into another one of 2019’s biggest sleeper hits.

There’s plenty more to browse in the sale, and you can always just swing by Steam Points Shop to pick up some spiffy new spooky season profile tchotchkes and skeletal animated avatars. The sale ends November 1, so you’ll have until then to fill that library up with ghouls and ghosts.