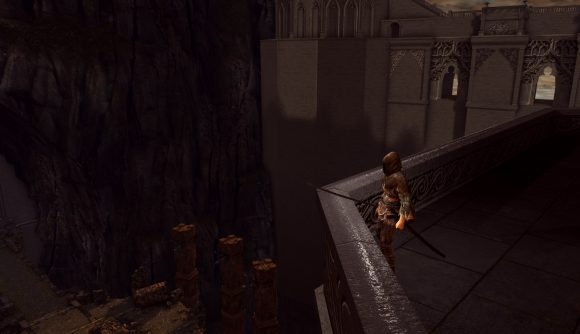 While we wait, potentially forever, for news of Elden Ring, what better way to spend the time than another piping-hot helping of the original Dark Souls? Several of the Souls community’s top modders have banded together to create Nightfall, a total conversion mod for Dark Souls that will introduce a new world map, a new combat system, and plenty of reworked enemies into a “direct sequel” to Dark Souls.

Heading up the project is modder Grimrukh, a New York-based scientist and game designer who is also responsible for the Daughters of Ash and Roguelike Souls mods for Dark Souls. For Nightfall, which he describes as “more ambitious” than Daughters of Ash, he’s working fellow Souls modders Meowmaritus (who you may recall discovered that the From Software development team rudely referred to Dark Souls 2’s Covetous Demon as ‘Jabba the Hutt‘ in game files) and AinTunez, who created the QuickSouls mod.

As planned, Nightfall picks up moments after the ‘Darklord’ ending of the first Dark Souls, at the dawning of the Age of Dark. According to this ResetEra thread, the main character this time around isn’t the Chosen Undead, and the story is meant to expand on – rather than overwrite – the Souls games’ lore as an ‘interquel’.

Grimrukh says the modding team hopes to add new, fully-voiced NPCs, as well as a new map that ‘remixes’ existing elements of Lordran into a new world that’s a ‘reflection’ of the original game’s layout.

This is a one-way connection in Lordran's new world design. If a determined streamer was to, say, spend two hours proving me wrong, that would be quite the sequence break…@Lobosjrgaming 👀 pic.twitter.com/5bACZgLVKy

While the team isn’t creating brand new enemies or characters for the game, they are bringing in a heavily modified combat system that supposedly plays more like Dark Souls III than the original, as well as major modifications and new animations to enemies. There are also plans for all new armour sets and weapons, as well as new boss encounters (also using heavily modified versions of entities from Dark Souls itself).

Grimrukh says the team has already put in a lot of work on the mod, and that he expects an initial release to be ready sometime in mid 2021. In the meantime, there are plenty of other RPG games to get stuck into as we dream of Soulslike adventures to come.