Dragon Age 4 is real and in production at BioWare, we know that much. But what when is the Dragon Age 4 release date? Where will the story go next? And which of our favourite characters will return? While BioWare may be tight-lipped about the sequel to Inquisition, a few pieces of the jigsaw puzzle that is their next fantasy RPG are already floating around the internet.

So far we’ve had a cryptic teaser trailer about the Dread Wolf, suggestions of a potential multiplayer angle, and heaps of clues to its story contents courtesy of various interviews and tweets with developers and writers who have worked on previous Dragon Age games. And yet, EA and BioWare are insistent on keeping the game’s title and release date under wraps… for now. But, as we’ll explain below, the most likely Dragon Age 4 release date is 2022.

Join us as we attempt to pick all of that information apart and figure out what kind of game the series’ fourth instalment will be. Each entry has been drastically different from the one that came before it, so expect plenty of speculation down below. Here’s everything we know about Dragon Age 4.

There is currently no Dragon Age 4 release date, as of yet. Although Dragon Age 4 has reportedly been in development since 2015, according to a report by Kotaku, the team were repeatedly pulled away to work on BioWare’s other games, namely Mass Effect: Andromeda and Anthem – as a result, the original Dragon Age 4 was shut down.

Development on a new Dragon Age 4 project started up again in 2017, and we may be waiting until 2022 for its release. During their recent earnings call, Blake Jorgensen, EA’s financial director said: “You should assume that there’s Dragon Age out there, we’ve talked about it publicly that it’s in the works – it probably comes after fiscal [year] 2022,”.

That may be a while away, but that hasn’t stopped the BioWare Dragon Age 4 teases. In the run up to December the developer tweeted about “Dragon 4ge day” and executive producer Mark Darrah also got in on the fun, simple tweeting “Dragon Age.” The incident passed without much incident, but it did reaffirm that the studio is working on Dragon Age 4 with a lovely tribute to the game’s fans.

The Game Awards 2018 gave us our very first official glimpse at Dragon Age 4 in the form of this brief teaser trailer called The Dread Wolf Rises. The trailer features Solus, suggesting the game will take place after Dragon Age Inquisition. We can also spot the lyrium idol that appears in Dragon Age II, although it’s impossible to infer anything from this. 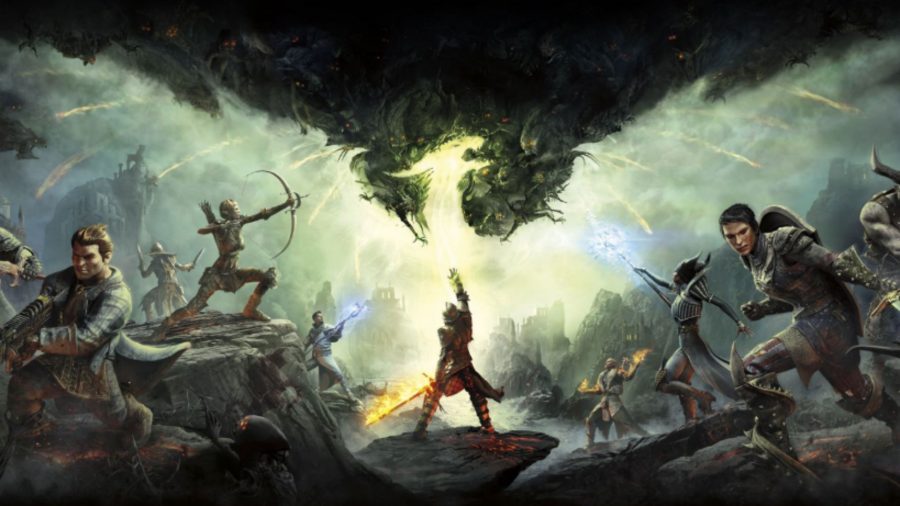 Dragon Age 4 will be built on the foundations of Anthem’s code. This may sound like a negative to some, as Anthem proved to be a critical disappointment, but it may also give BioWare’s team the consistency that they need going forward. Thanks to using Anthem’s tech, development on Dragon Age 4 should be more smooth, as devs won’t need to start from scratch, as is the norm for the studio. Speaking to Kotaku, one anonymous source explains that “Anthem might be the kick in the butt that BioWare leadership needed to see that how you develop games has changed dearly. You can’t just start fresh and fumble your way forward until you find the fun. That doesn’t work anymore.”

As for the gameplay, it is too early to tell, as the game was rebooted in 2017. Speaking to Kotaku, however, one developer suggests it could include a single-player campaign that opens up into a multi-player one post-game. Apparently there is even an idea it could have Baldur’s Gate-influenced co-op.

Thanks to Alexis Kennedy revealing that he has written content for the next Dragon Age game, we know that development started shortly before May 2017. We also know that all Dragon Age-related job listings have been removed from BioWare’s website, which could suggest that the final development team roster has been cemented.

On top of that, we know that the project won’t be headed up by Dragon Age series creative director Mike Laidlaw. That is because in October 2017 he left BioWare after 14 years with the company.

A thank you tweet to Laidlaw from Dragon Age executive producer Mark Darrah reads, “I am so excited for you to see what the next Dragon Age will be,” confirming that development is certainly underway something Dragon Age-related.

Yet another announcement further confirmed, albeit unofficially, that a fourth Dragon Age game is in production. Executive producer of the entire Dragon Age franchise, Mark Darrah, tweeted that people were “hard at work” on a new game.

Reading lots of feedback regarding Dragon Age, and I think you’ll be relieved to see what the team is working on. Story & character focused.

Too early to talk details, but when we talk about “live” it just means designing a game for continued storytelling after the main story.

Word from sources within BioWare suggested that the game would be “live”, leading to concerns from players about Dragon Age becoming a Destiny-like multiplayer game. BioWare’s general manager Casey Hudson tweeted about these fears, emphasising that the live elements would be focused on continuing the story after the main narrative is over.

Though recent updates on Dragon Age 4 development have been few and far between, thanks to a tweet from Mark Darrah, fans have been reassured that the fourth Dragon Age game is still on its way. Darrah explains that though the team is now working from home, and ‘working from home is harder’, they’re ‘making progress.’

While no concrete details of Dragon Age 4’s story have been revealed, we do know that Alexis Kennedy, founder of Failbetter Games, has been involved in the game’s writing. In May 2017 he revealed that we was working for BioWare on a chunk of story and lore. His plotline is said to be separate from the core story, but more substantial than background lore drops. In short: expect characters with dialogue and backstory.

“If you’ve seen a lot of my work before you will probably not be surprised by the choice of subject matter. It’s familiar stuff,” Kennedy told Eurogamer, suggesting that there will likely be a strange, Lovecraftian feel to his section, or at least a focus on death or loss. Perhaps it will be set in the Fade, Dragon Age’s demonic dimension?

A Dragon Age comic book was also announced to be set in Tevinter, the possible setting for Dragon Age 4, and will include a fan-favourite character Fenris, last seen in Dragon Age 2.

Aside from that, any details about Dragon Age 4’s plot are purely guesswork. After the success of Inquisition, it is a sensible bet that the next game could be a direct sequel, as opposed to a largely standalone story set in the same universe as the series has been so far. The end of Inquisition saw trickster elf Solas – revealed to be the god of betrayal Fen’Harel – disappear, and the Trespasser DLC concluded with the Inquisitor vowing to track him down and stop his plan to destroy the world. It makes sense that a sequel would cast Solas as the key villain and deal with halting his plans to usher in a new age for the ancient elves.

The recent The Dread Wolf Rises trailer does offer some context for the new Dragon Age game, as it features Solas we can assume the game will follow on from the events of Inquisition and its Trespasser DLC.

Wherever Dragon Age takes us next, we can be certain that the universe has more stories to tell. In August 2017, creative director at the time, Mike Laidlaw, explained in a tweet to a fan that the Dragon Age team had ideas for a “theoretical game five,” and that “[t]here is no planned ending for DA.”

Related: Why Dragon Age’s lore is so great

Laidlaw has also expressed that the game may not be the fourth game in the core series, suggesting the Dragon Age game currently in development could be a spin-off, exploring a different area – perhaps even a different time period – of Thedas. Maybe we won’t be tracking down Solas after all.

More recently, we got some information on the potential setting for Dragon Age 4. Early into next year, BioWare is releasing a collection of short stories called Dragon Age: Tevinter Nights, which features Dragon Age 4’s lead writer Patrick Weekes. Fans are excited as plenty speculate that the Tevinter Imperium will be the next setting for the Dragon Age series.

I will say this:
We have a plot with the working name of “Tevinter of our discontent”
…
…
Who am I kidding, we’ll probably ship that. https://t.co/T9BwzQkcUg

Bioware’s Mark Darrah further fuelled the Tevinter theories with the above tweet, in which he references a potential Dragon Age 4 plot called “Tevinter of our discontent” which is a clever reference to Shakespeare’s Richard III. 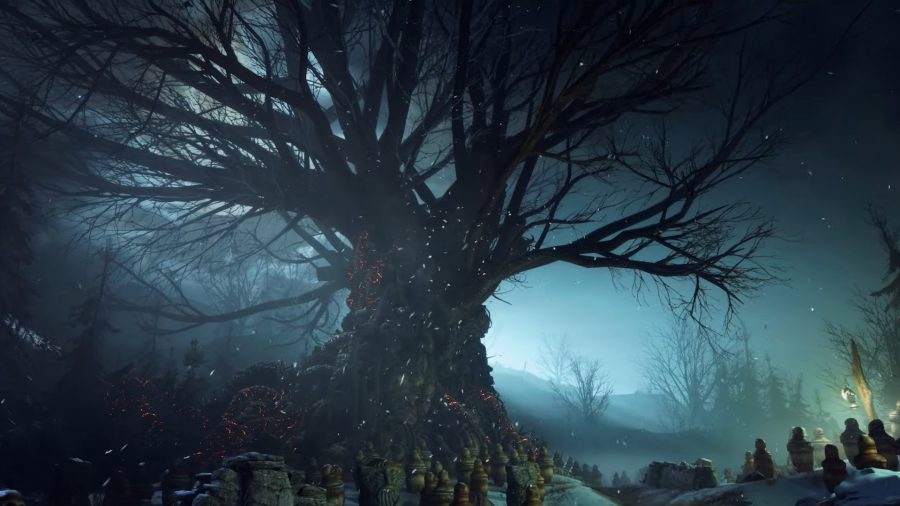 It’s possible that we’ve been shown some brief clips of brand new Dragon Age 4 environments at EA Play 2020. The first of the three scenes features a large, creepy looking tree, covered in thick, faintly glowing growths, in a snowy graveyard. The second, a stone archway surrounded by water, with bright red tendrils bursting from the rock. The third scene features more of these luminous tendrils growing in a fortress, framing an ominously pulsating stone egg.

Though these scenes are all labeled with ‘Work in Progress’, and we shouldn’t expect to visit these exact locales come the Dragon Age 4 release date, they at least serve to set the scene and give us a small indication of what awaits us – a dark, foreboding world, glowing with magical corruption. 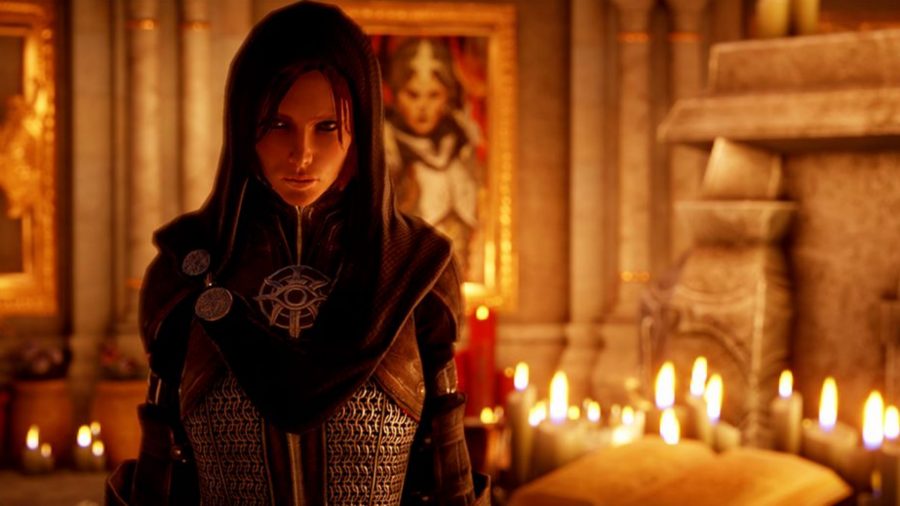 With multiplayer increasingly prevalent across the industry it shouldn’t come as much of a surprise that Dragon Age 4 will likely feature some form of multiplayer component. This clue cropped up courtesy of a job listing for a franchise technical director for Dragon Age that requests somebody with “experience developing multiplayer games.” With no significant multiplayer elements in any of the previous Dragon Age games this listing looks to apply to the upcoming Dragon Age game.

That’s everything we know about Dragon Age 4 at the moment, but once we get a whiff of a Dragon Age 4 release date, we’ll be sure to update you. For now though, Dragon Age.