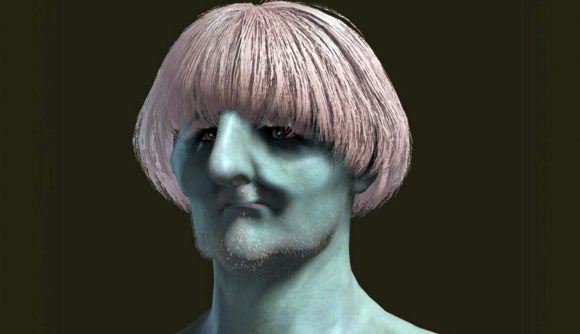 You know what the best thing about a great RPG character creator is? The deluge of abominations that hit social media when the flood gates open to all. Elden Ring has just landed – it’s quite popular; you might have heard of it – and its character creation options are clearly extensive, as players are already filling the ‘net with their inventions. Thank goodness, they’re both horrifying and hilarious.

So far, we’ve got a real mixture of things to check out. Redditor PercyWolfAndrew has shared their reimagining of ‘handsome’ Shrek from Shrek 2 (below) – à la the Happily Ever After potion – if the poor ogre-turned-human had somehow ended up in the Lands Between. It’s pretty darn faithful to the big screen fella, too. He’s got the shaggy hair, square jaw, big brown eyes, and super expressive eyebrows. You can take a look at hunky Shrek’s Elden Ring doppelgänger below.

Then we have the beloved grumpy cephalopod Squidward, who’s a bit of a character creator fan-favourite. Spongebob’s reluctant neighbour has been given the Elden Ring treatment with some gloriously green skin and a big shiny head.

Here are some of the Elden Ring creations floating around so far:

My attempt at handsome Shrek from Eldenring

For your consideration, here’s my early version of GigaChad. from Eldenring

We have a little tribute to Uncharted’s Nathan Drake, too:

Did I just accidentally make Nathan Drake? You bet I did.#PS5Share, #ELDENRING pic.twitter.com/ORBcZ7snT6

And one for the anime Beserk’s leading swordsman:

I made my Guts character today on Elden Ring. What do you guys think? #Berserk from Eldenring

As for what people have made of the rest of the game, Elden Ring has been received extremely well across the board. In our own Elden Ring review, deputy editor Jordan scored it a perfect ten out of ten, calling it a “supercut of FromSoft’s very best work, transported to a totally new space”.