Want to know how to play Elden Ring? The ambitious and long-awaited new Soulslike game is nearly here. Elden Ring marks a departure from the well-trodden Dark Souls series, but keeps the taxing difficulty that players expect. We’ve seen plenty of glowing praise for the latest FromSoftware game, including in our Elden Ring review.

It’s pretty safe to say that Elden Ring is a tough game. Frequent ambushes and enemies that can kill you with a single hit can make the first few hours very difficult. To help you get up to speed, we have some tips to help beginners beat even the hardest of Elden Ring bosses, and everything new players need to know about Elden Ring’s mechanics. Some of these mechanics require more in-depth explanations, such as the Elden Ring map fragments and how to play Elden Ring multiplayer.

Before we begin, one way you can save yourself a massive headache is to have a notepad to hand from the very start of the game. Elden Ring won’t hold your hand when it comes to keeping track of side quests or if there’s an item that you can use at a specific place to uncover valuable items or powerful weapons. With that said, here are our top Elden Ring tips:

How to find the Elden Ring tutorial

Previous FromSoftware games have a mandatory tutorial area that allows new players to learn the new mechanics. Elden Ring bucks this trend slightly by putting the entrance to the tutorial area in an optional path that’s easily missed.

Who to choose? Here are the best Elden Ring classes

To find the Elden Ring tutorial area, head for the glowing tree straight ahead of you as you revive at the Stranded Graveyard. There is a small white light and a ledge to the right as you approach the tree. You need to drop from this ledge to access the tutorial, which teaches you how all of the basic moves work, what Sites of Grace look like, and how to perform Guard Counters. 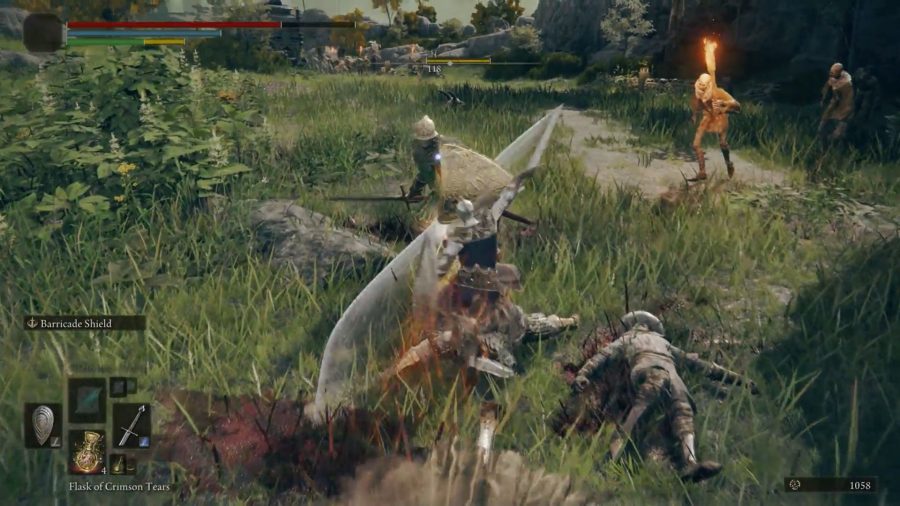 Stamina management is key to surviving any encounter in Soulslike games, especially so in Elden Ring. When in combat, it’s easy to get complacent and attack constantly, but you should back off to recover stamina whenever you can. Doing so gives you the option to roll or run away from danger if the enemy suddenly attacks mid-combo.

It’s also worth noting that holding the guard button slows your stamina recovery, so let go of this button to quickly fill the stamina bar if you’re sure it’s safe. 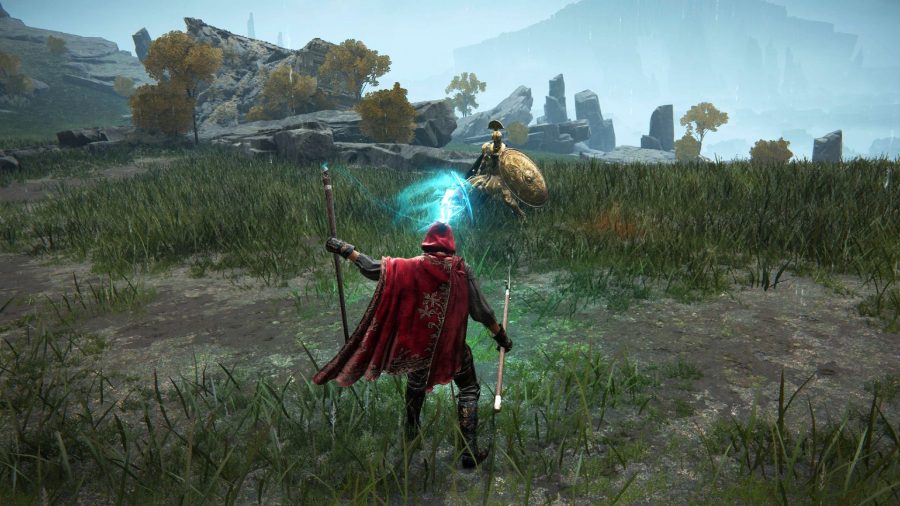 To use magic and spells, you need to find the corresponding scroll to learn its magic, then allocate that magic to an available slot at any Site of Grace, and finally meet the stat requirements to use the spell. Every use of the spell expends force points (FP), which you can recover using the Cerulean flask.

However, one change from the previous Souls games is that you now get them from Memory Stones instead of gaining additional spell slots with levels. You can find these stones after defeating major bosses or clearing a legacy dungeon. 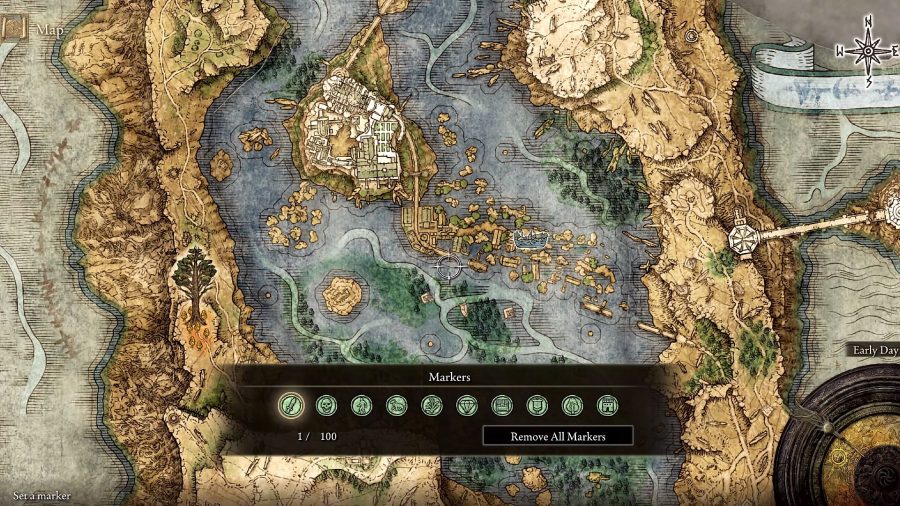 Use the compass to find landmarks

Learning to navigate between landmarks is a vital part of this open-world game. Every time you discover one of the Elden Ring dungeon locations by getting close to its entrance, it shows up on your compass at the top of the HUD.

If you’re stuck trying to find a specific location or only have a vague idea of where you want to go, head into the map screen and place a beacon on your desired destination. You have the option to set multiple beacons to guide you if the path to get there requires travelling through other areas first. 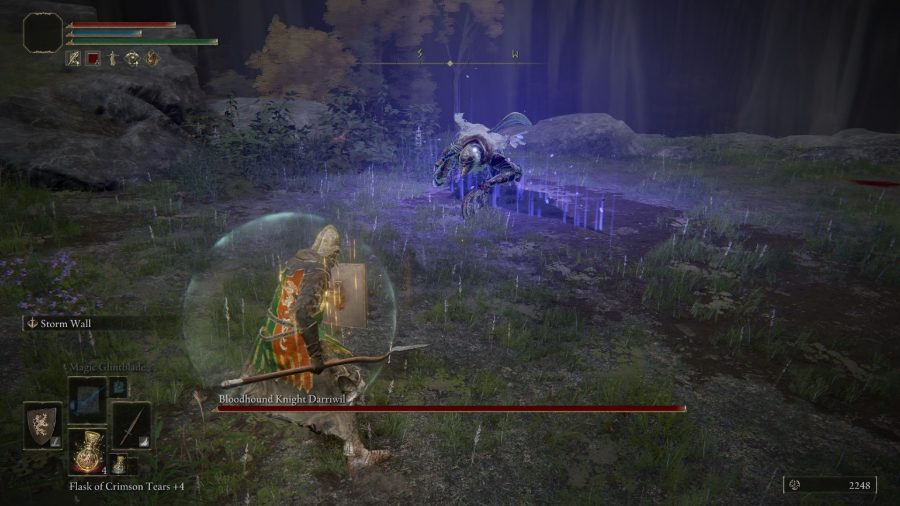 As enemy attacks or traps hit you, you may see a small bar appear at the bottom of the screen. This gauge behaves differently depending on the attack, but generally, it increases in chunks after each hit and then slowly drains away. If it fills up completely, you will get a status ailment. Here are all of the Elden Ring status ailments we know of so far:

You can use items, some of which you can craft, to heal yourself completely and gain some resistance to that status ailment, but it’s better to avoid the potential damage in the first place.

How to use Elden Ring weapon art skills

Elden Ring Ashes of War are the most obvious ways to use powerful skills against your foes, but equipping these special moves isn’t the only way to get unique attack options. Hidden throughout the game are several weapons, armour, and gadgets that can give you the edge in combat via their Elden Ring weapon art skills.

Some of the best Elden Ring weapons have unique weapon skills you can use by switching to two-handed mode. The default buttons for how to do this are below:

Early in the game, the Reduvia – a bloody knife that flings swirling crimson daggers a short distance away – is a fantastic weapon you should pick up when you can. If you can position yourself a short distance away from an enemy, you can trivialise even some difficult Elden Ring bosses by repeatedly lobbing bloody knives at them. 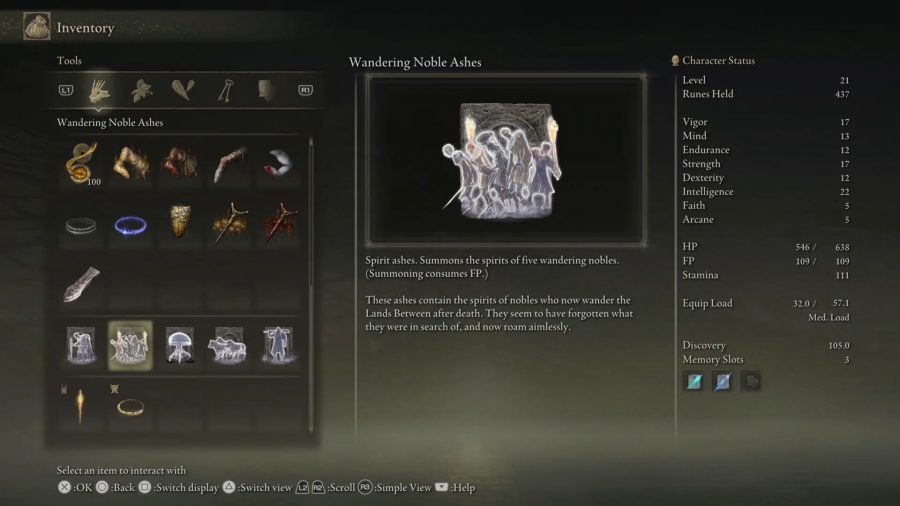 How to use Elden Ring ash summons

Ash summons are not the same thing as Ashes of War. Instead, ash summons are special items that give adventurers playing on their own some backup in the form of spirits. These are especially helpful for fighting against more brutal bosses as they can also distract the boss long enough for you to get a few hits in.

To perform a summon, you need to get the Wraith Calling Bell from Renna the Witch at the Church of Elleh. Once you have it, ring the bell at the Rebirth Monument or when the monument icon is on the left side of the screen to summon a spectral ally. Note that if you are playing Elden Ring multiplayer, you can’t also summon these allies to join you. 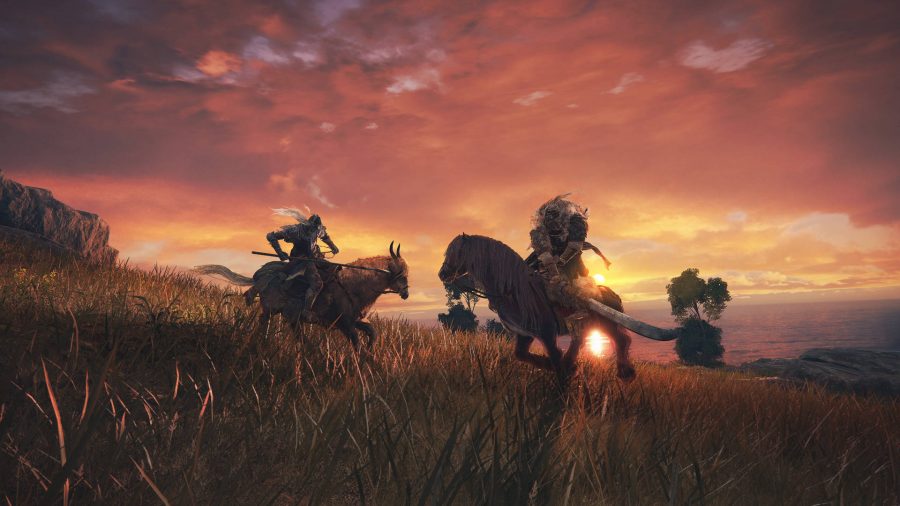 Don’t rely too much on horseback combat

Elden Ring gives you a horse that makes travelling across each region significantly quicker than doing so on foot. While riding a horse, you can pick up items you need to craft recipes from the Elden Ring cookbooks. You can also fight enemies while on horseback, and most foes you encounter won’t know how to handle your attacks.

That said, there are at least a couple of foes who, while not too challenging on foot, create extra problems for you while in the saddle. For example, the bandits roaming the farms near the Gatefront Ruins will attempt to dismount you from your noble steed before stabbing your now prone body. So if you find that they kill your horse without so much as breaking a sweat, consider fighting them on foot instead.

Those are all the Elden Ring tips and tricks we have for you now. We’ll be sure to update this guide with more tips to help you get started.