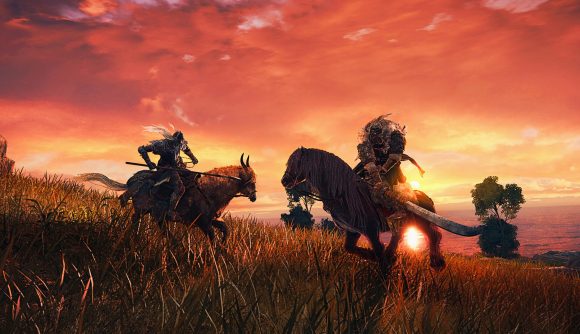 Open-world juggernaut Elden Ring continues to go from strength to strength, with publisher Bandai Namco confirming in its latest sales report that Elden Ring sales have exceeded 13.4 million worldwide as of March 31. The challenging RPG has further solidified developer FromSoftware as a mainstream success, eclipsing sales of their previous titles such as Dark Souls III, which sold just over three million copies worldwide in its first month of release – at the time the fastest-selling title in Bandai Namco’s history.

A previous report stated that cumulative worldwide sales of Elden Ring had exceeded 12 million by March 16, meaning that it racked up another 1.4 million units sold in the last two weeks of that month. The acclaimed open-world co-op game still has a way to go to reach the combined Dark Souls series sales, which Bandai Namco reported had reached 27 million in 2020.

It was also recently reported that almost half of Elden Ring’s EU sales were on PC, making the PC version the most popular, with its total units sold outstripping the combined sales numbers on PS4 and PS5. To further put these numbers into perspective, FromSoftware’s previous title Sekiro: Shadows Die Twice sold 5 million copies in just over a year.

Elden Ring has seen huge cultural impact, with players rallying around watching the most ridiculous, game-breaking Elden Ring speedruns and cheering on community hero Let Me Solo Her, who reached their own personal milestone as they completed their 1,000th takedown of the game’s most notorious boss fight, Malenia.

With such high sales figures, it’s likely you’ve already played Elden Ring yourself – but have you played Elden Ring using a Fisher-Price gaming pad? Or attempted to traverse The Lands Between with an enemy randomizer mod? Perhaps you’re waiting to experience the gorgeous open world in the upcoming Elden Ring VR mod? Or perhaps you’ve had your fill altogether, in which case we’ve got the best soulslikes on PC for suggestions of more games to sate your curiosity.