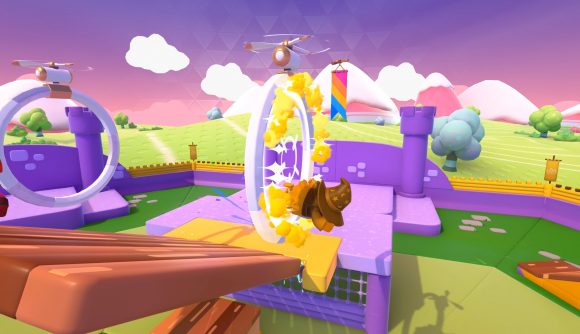 Mediatonic, the developer behind Fall Guys, is looking for insight into what your favourite and least favourite stages are. The series of questions will help shape the future of the battle royale game.

The survey was tweeted out by the official account, and the questions cover three categories: which stages you like, which you dislike, and how many stages you expect in each season. The Google form then asks about how important you feel certain aspects are for new content. Do you think variations on old rounds is more important than fresh maps? Do you believe the multiplayer game needs more survival levels and less team games?

On the back of Season 2, which was largely developed pre-launch, the data gleamed here will help understand exactly what the now very large community wants out of the rolling updates, and where any particular differences among the players lie. Everyone’s got different strengths and weaknesses in Fall Guys – for instance, I want Fall Ball eradicated from the face of the Earth, and could play Slime Climb for hours. Chances are very high at least one person reading this is the exact opposite, and thinks my opinions deeply flawed. An in-flux of everyone’s tastes identifies trends among all the subjective chaos.

Fall Guys Season 2 brought with it some medieval fantasy themed rounds and skins. In light of SEGA celebrating its 60th anniversary, Fall Guys added a Sonic The Hedgehog skin too, and the less said about that the better.

Please may you fill in another survey? 🥺👉👈

This one is all about rounds!

Our sister site The Loadout interviewed Mediatonic about Fall Guys’ sudden popularity, and if you’re exhausted with seeking crowns, we have the best games like Fall Guys for you to explore.