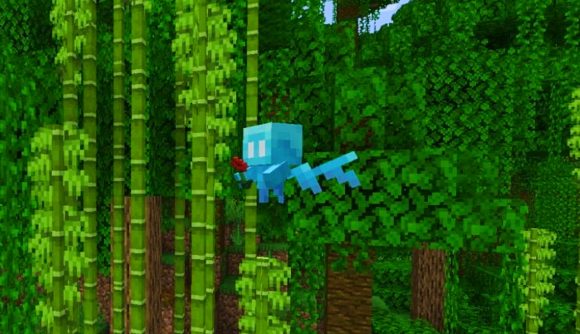 Minecraft’s Allay mob is one of the best creatures the building game has to offer. We initially heard about it back in 2021 as part of Minecraft Live, but didn’t actually see the creature in-game until March this year. It currently exists within the Minecraft snapshots in Java edition and the beta version in Bedrock edition. Since its introduction, Mojang has buffed and changed it in a variety of ways. It’s all in preparation for the Allay to be added into the game properly in the future, and it seems as though we could be getting more information on this soon.

That’s because we’re getting another episode of Minecraft Now this Thursday at 9am PDT / 12pm EDT / 5pm BST. The monthly show reveals upcoming features for both Minecraft and Minecraft Dungeons, regularly featuring submissions from the community and other little challenges too. The last episode showed off the Minecraft frogs, who are also in the pre-release phase of their existence.

This time around, though, the Minecraft Twitter account suggests getting “your questions ready about the allay”. Hopefully that means we’re on the cusp of hearing about the release date for Minecraft 1.19, because we’re all chomping at the bit for the next proper update. The Minecraft snapshots are nice and all, but it’s not quite the same as a full release.

The show will also contain information on Minecraft Dungeons’ next big update. If you’ve not checked out Minecraft Dungeons, you should because first of all, it’s on Game Pass, and secondly, it’s quite good fun and makes for a great intro to action-RPGs for younger gamers too. It’s even cross-platform, which is always a nice bonus.

In other Minecraft mob news, did you know that you can capture the Ender Dragon, but it takes a lot of effort to manage it?