Looking for the best Resident Evil Village mods? The latest Resident Evil game has proven to be extremely popular and thus the modding scene has been squirreling away creating some outstanding mods – including mods that tinker with the game’s files to help ease the effects of simulation sickness.

The bulk of what we’ve seen so far, though, have been cosmetic swaps, mostly focusing on Lady D and her three daughters, and we’ll always understand the appeal of replacing the tall lady chasing you with Thomas the Tank Engine, but others could be useful for those who are struggling to run the game, or really don’t like flies.

While the modding scene for the game is still in its infancy and there’s plenty of room for something truly mind blowing to come our way soon, these are the best Resident Evil Village mods we’ve found so far. Before you ask, yes, there is a Thomas the Tank engine mod, and it’s every bit as terrifying as you’d wish for it to be.

How to download the best Resident Evil Village mods

If you fancy playing around with some of the best Resident Evil Village mods out there, then be sure to head on over to Nexus Mods and download the Nexus client. After that, you’ll need to download the Fluffy Manager mod manager and FOV trainer to get started, making sure to follow the instructions in the page for handling game updates. It also has the added benefit of adjusting your FOV, since Resident Evil Village doesn’t have one by default, so if you find the rather narrow perspective a bit nauseating, you can tinker with that a smidge. You can now also play the game in third person with the Fluffy Manager v2.246 update. If you’d rather just have the FOV and vignette mod on its own, there is a separate entry for that.

Once you’re happy with how it’s working, you can begin to explore the dark, and occasionally seedy world of Resident Evil Village mods. 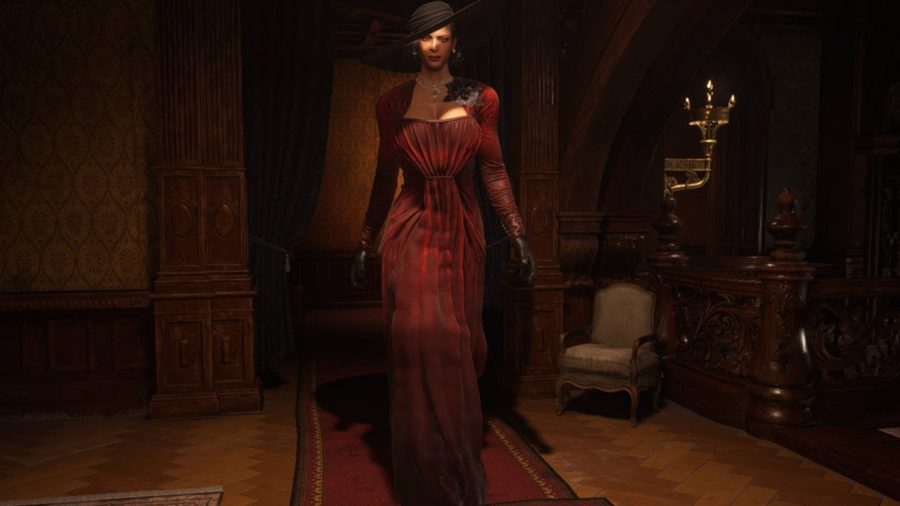 Look, we know that many of the mods are going to tinker with the tall lady’s design, but how can you improve on perfection? The answer is that you can’t, but perhaps you can find a mod that changes her into something a little more familiar. Enter the Lady Wong mod that transforms Lady D’s face into fan favourite character Ada Wong, while also giving her the fanciest blood red dress.

At the moment it’s just a face mod with a slightly different colour palette for the dress, rather than any of Ada’s actual outfits, but it does strangely suit her rather well. 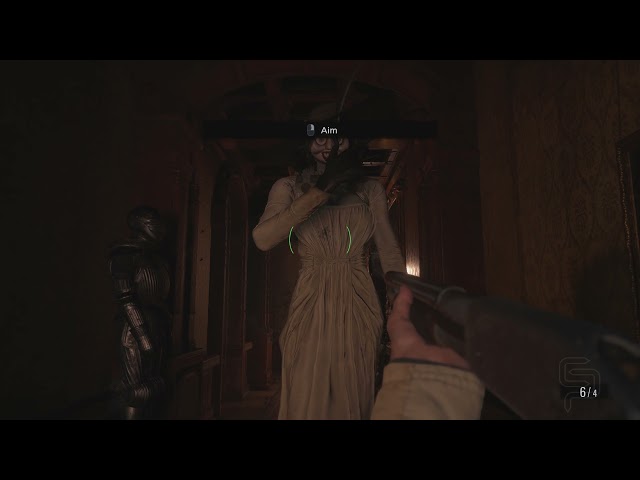 You can’t have a Resident Evil mod without replacing a boss that stalks throughout with Thomas the Tank Engine. There’s a long standing tradition that’s been around ever since Skyrim that if there’s something big and scary that’s trying to kill you in a game that can be modded, it will become Thomas. Recent conversions include Sekiro’s serpent, Resident Evil 2’s Mr. X, and enemies from Fallout 4.

Complete with a dissonant version of the TV series’ theme tune, the Count Theodora mod morphs Lady D into the grinning face of Thomas, gurning as it relentlessly pursues you through the castle walls. You can even decide whether the Count retains Lady D’s white dress or wears a royal blue one instead. Still, the eyeliner around the eyes makes the Count look like one of the dolls in the Beneviento House, which is not for the faint of heart. 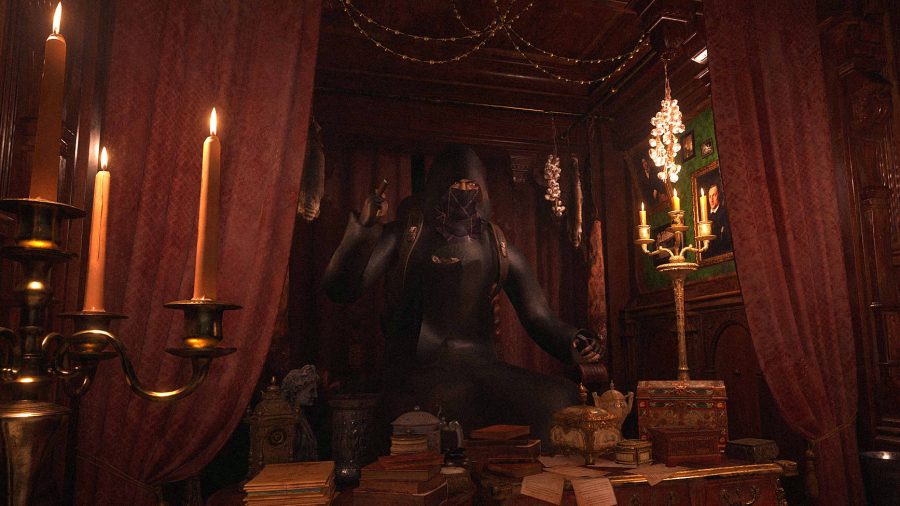 It’s not just Lady D getting a makeover, you can transform The Duke into the Resident Evil 4 merchant by installing the Ricardo Milos mod. This one isn’t available on Nexus Mods, but does require the same Fluffy Manager mod to install.

There’s also one to give Lady D’s daughters Nier Automata’s Yorha style clothes if you fancy that instead, or perhaps turning Chris Redfield into Dante from Devil May Cry? Either way, it’s thankfully not just Lady D hogging all the attention. Hopefully Donna Beneviento’s dolls get a mod to turn them into the Jigsaw doll at some point. 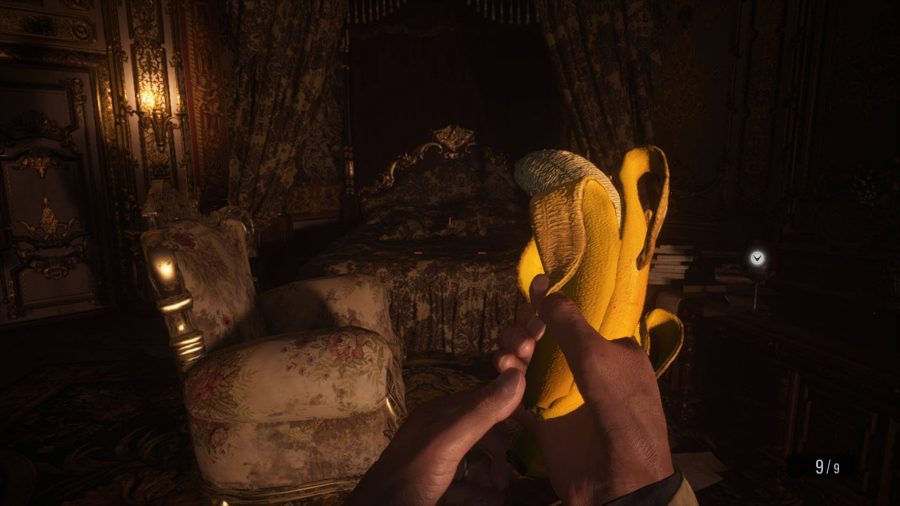 There’s a fair number of mods that replace the weapons with goofy objects and sure, the Banana Gun and Spoon Knife is an old idea, but it’s silly enough to work and looks even better in first person. 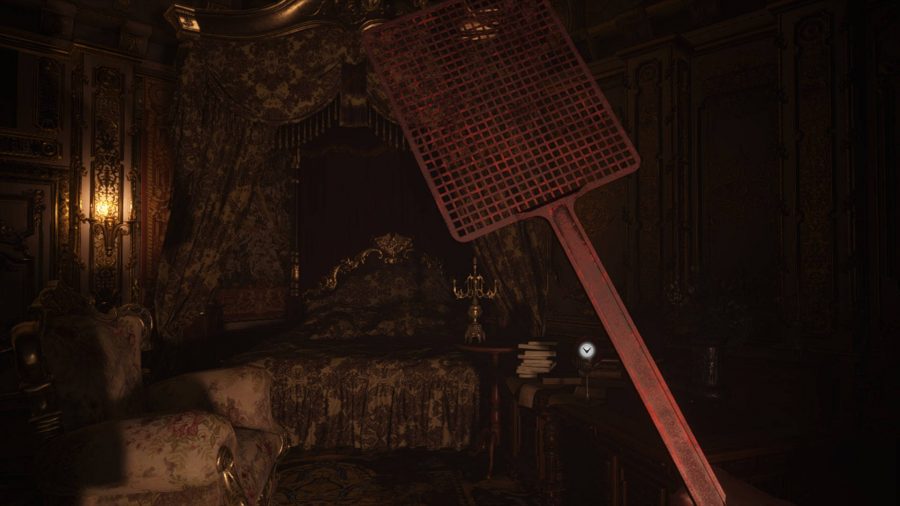 Speaking of mods that alter your weapons, do you get irritated by the flies constantly buzzing around your face while sneaking through Castle Dimitrescu? If the answer is yes, then the fly swatters mod might be for you. It changes your default melee weapon from a knife into a bug’s worst nightmare. Does it actually do anything other than that? No, but then again it makes for an excellent placebo effect.

This mod gives you three differently coloured fly swatters, from a rather dull red to some attractive silver and gold variations. Of course, flies are not the only thing you can swat in Resident Evil Village…

Want to actually get rid of the flies? The Daughters Flies Removal mod gets rid of the bugs buzzing around you, and sees each of the three daughters in their full regalia. We’re not sure if this mod improves the Resident Evil Village performance settings by physically removing them, or if it just disguises their appearance, but it certainly makes the image a lot clearer if you’re struggling to see through the cloud of bugs. 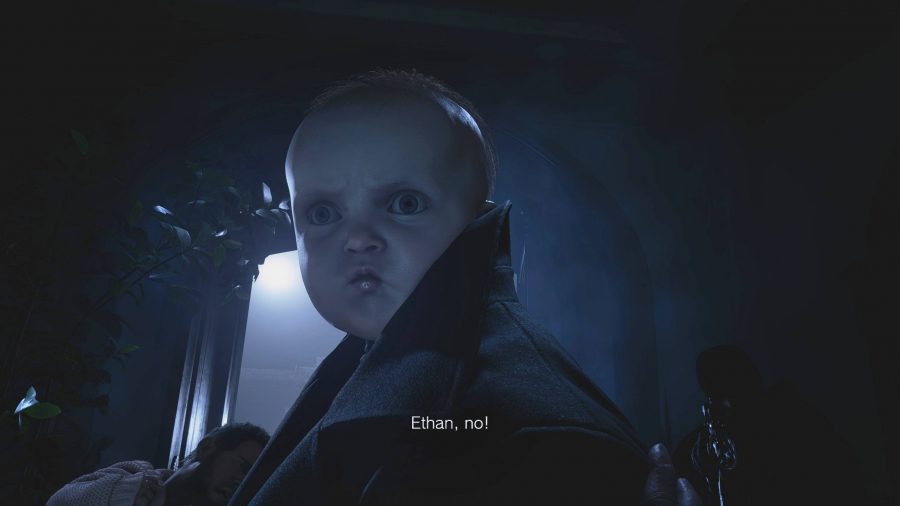 Mini Me Chris and Baby over Chris Face

For an image you’ll never be able to unsee, introducing Mini Me Chris and Baby over Chris Face, two mods that swap Ethan’s baby and Chris Redfield’s faces. We’re having nightmares already about Baby faced Chris.

While the page says the baby face’s eyes don’t move, there’s still something deeply unsettling about this cherub-like face staring into your soul that makes it worth the download. Hopefully the mod creator JTegh gives us the option to toggle the eyes in a future update. 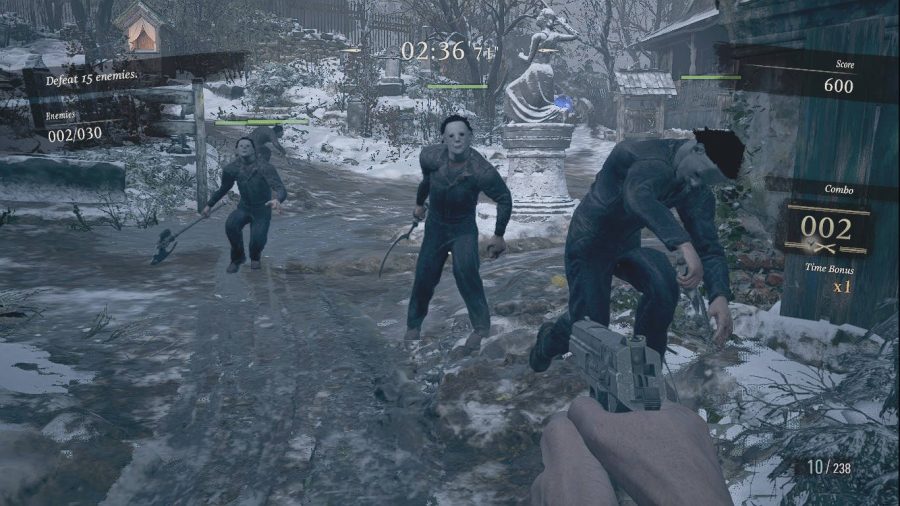 Resident Evil Village has plenty of model swaps already, but they tend to focus on the big bosses of the game. This one affects the zombie-like Moroaica, turning them all into Michael Myers from Halloween. It’s still a bit surreal seeing the slow shamblers look at you blankly as they’re about to drive a sharp weapon into your chest, but if you’re a fan of the Halloween films, this is a must-have mod.

It’s purely a graphical change, but you’ll still need to go into the Steam settings to enable you to use the PS4 or Switch pad to play the game. You can do this by going to Steam Big Picture mode, select ‘settings’, then ‘controller settings’. You can then check the options to swap to PlayStation controller layout for Sony’s pad, or for the Switch check both ‘Switch Pro Configuration support’ and ‘Use Nintendo button layout’. 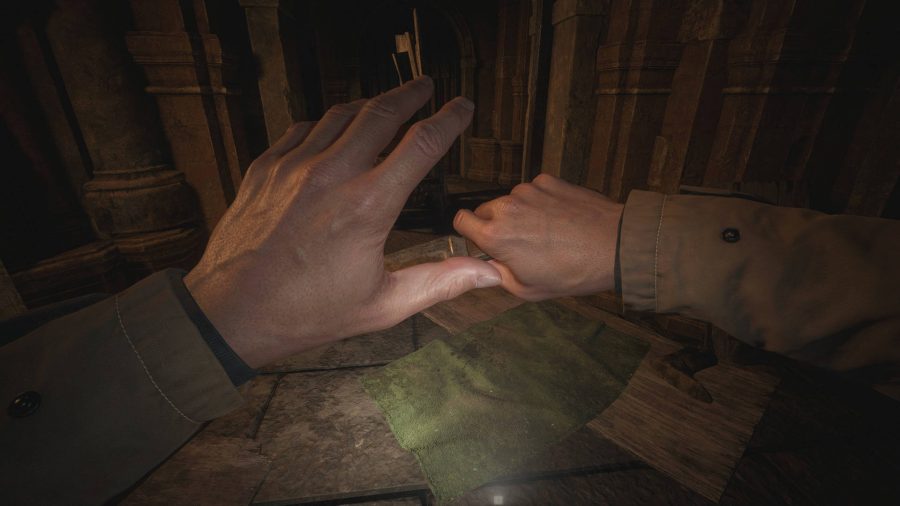 For those who really can’t stand looking at the bloody stumps where Ethan’s fingers used to be, or just really don’t like looking at dismembered hands, this mod is for you. Ethan’s Hand Restored literally does just that: restore Ethan’s left hand. What it doesn’t do is restore the other hand for that bit, but that problem resolves itself rather quickly.

Perhaps you don’t like just how clean Resident Evil Village sounds in the menus and are looking for something a little more ‘retro’. You don’t get much more retro with the survival horror juggernaut than RE2 inventory sounds, and by RE2, we mean the PlayStation era version and not the remake. 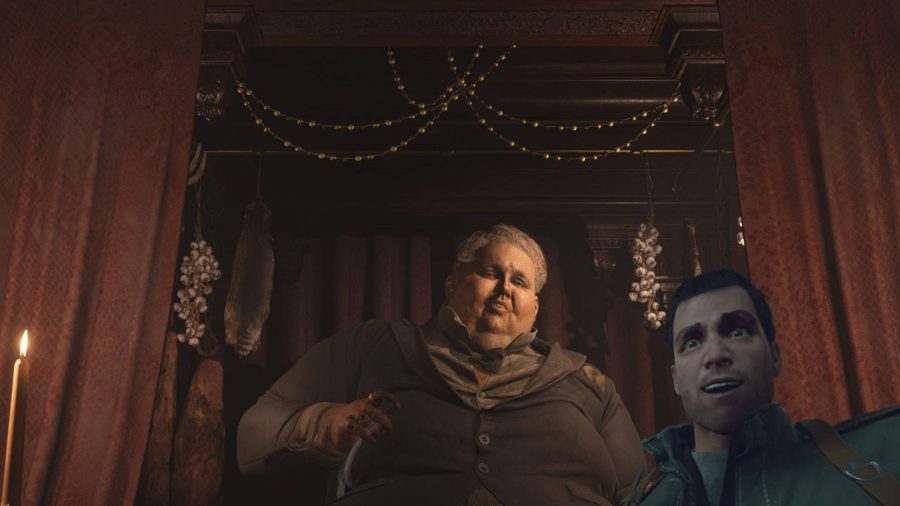 Of all the gag mods, this is one of our favourites. The Frank West photo mode selfie overlay mod changes the picture frame filters on photos you take with Frank West’s mug. The best bit is that because there’s multiple frames, you can customise which reaction Frank has when taking the picture.

Marvel as Frank smiles alongside the merchant, looks scared as a scary bug lady approaches, and makes whatever that face is as he spies on Lady D sampling the finest of red wines.

And those are the best Resident Evil Village mods out there so far. We sadly can’t yet play the game in third-person or turn all of the Moroaica into clones of Barney the Dinosaur just yet, but in the meantime, why not check out some of our other guides on the base game itself? We’ve got ones on the Goats of Warding locations, weapon upgrades, and the locations of all the rare animals for making delicious recipes with.