Wondering (ha) about the best class in Tiny Tina’s Wonderlands? As a spin-off of the Borderlands series, it’s no surprise that there are a lot of guns to find in the FPS game. However, the class you choose for your character – or Fatemaker, as Tiny Tina likes to call them – determines the skills you have available to you over the course of the game. To put together the best Tiny Tina’s Wonderlands builds, you’ll need to obtain gear with high power numbers that synergises with your class feats, skills, and passives.

You can’t change your Tiny Tina’s Wonderlands class once you’ve locked it in, but luckily your subsequent build decisions, such as which passive skills you invest points into, aren’t as permanent; eventually, you unlock the option to respec your Fatemaker at any time. At some point, you can also choose a second class to mix with your existing class, so your Brr-Zerker can add the Spore Warden’s toxin-spreading skills to their powerful frosty abilities.

To help you decide which Fatemaker abilities suit your play style the best, we’ll go over all six of Tiny Tina’s Wonderlands classes, summarising all of the action skills, class feats, and passives they have. 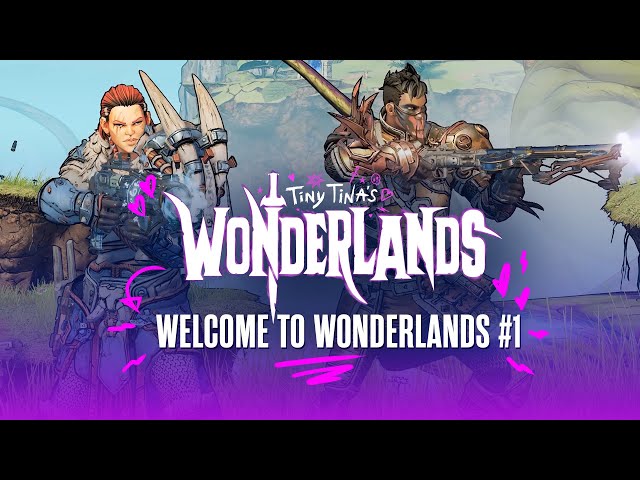 If you are the kind of person who prefers to close combat to fighting at range, the Brr-Zerker is the class for you. Much more than a simple brute who mainly focuses on hitting enemies as hard as they can, the Brr-Zerker infuses their attacks with the power of frost, freezing and shattering any unfortunate soul that meets them in battle.As a Brr-Zerker, you want to use your action skills often in order to trigger your class feat, Enrage, While Enrage is active, every hit the Brr-Zerker lands with a skill or gunshot deals additional frost damage.

Your two available action skills are Dreadwind and Feral Surge. Dreadwind makes your bruiser spin rapidly, with their melee weapon stretched out into a whirlwind of pain. After using this skill, the Brr-Zerker also gets additional movement speed and slow immunity for a short time.

When you use Feral Surge, your Fatemaker leaps towards the enemy, smashing down their melee weapon to inflict AoE frost damage. It’s a great way to close the distance if your enemy is far away, and it sets you up for follow-up attacks if you manage to kill an enemy with it. Non-boss foes die to Feral Surge if their total health is below a certain threshold, so the chances of leaping again are pretty high.

As for the passives, the early tiers focus on boosting your melee damage, enrage duration, and frost damage. You can also invest points into bolstering your Brr-Zerker’s regenerative abilities or enabling you to inflict slow or frozen status ailments. Higher tiers give you powerful perks, such as a chance to release an AoE frost attack for every melee hit. 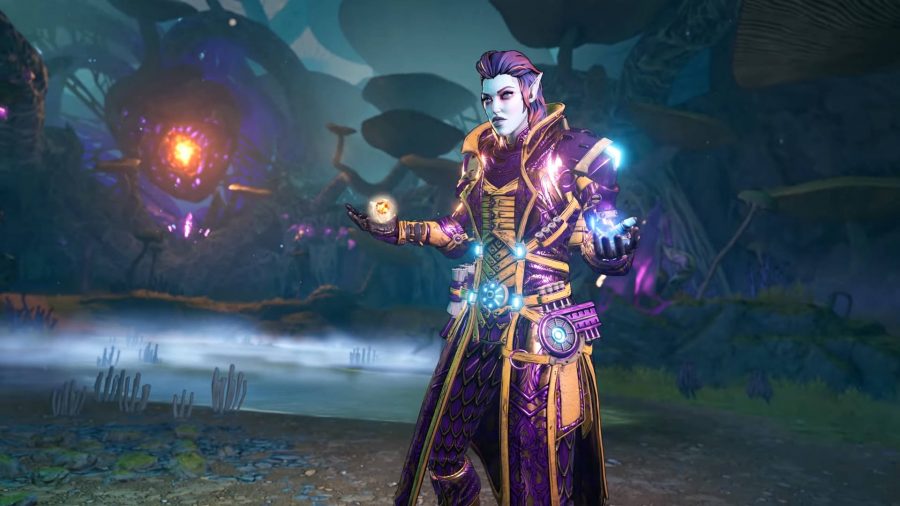 The Spellshot is the closest class to a wizard in Tiny Tina’s Wonderlands. In addition to firing guns at enemies, you can cast spells with the Ambi-Hextrous action skill to deal elemental damage. Each spell or weapon reload gives you a stack of Spellweaving to increase all damage dealt by your Spellshot’s magic to enemies. This expires after a short time, but you can replenish your stacks easily.

Your other action skill is Polymorph. This powerful enchantment spell transforms your enemy into a harmless Skeep for a few seconds. You also get a chance to cast free spells if you damage the Skeep. Unfortunately, some more formidable enemies are immune to the transformation effect, so instead, you get a free spell and two stacks of Spellweaving.

Passive abilities for the Spellweaver focus on buffing your spells, transferring spell damage bonuses to your guns, and increasing reload speed. Higher tier spells give you a slim chance to instantly reload your guns whenever you kill an enemy or give critical hits with your guns a chance to reset all your spell cooldowns. 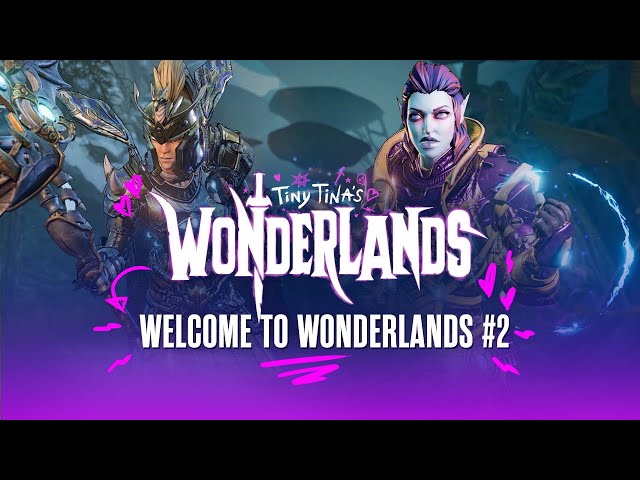 The Clawbringer class has an unusual mix of abilities, specialising in fire or lightning-infused hammer attacks to annihilate any nearby enemies, while your wyvern companion uses its draconic abilities to pick off any stragglers with its fiery breath. It’s worth picking up any abilities that boost the Clawbringer’s damage because the wyvern companion gets them too.

Your action skills are Cleansing Flames and Storm Dragon’s Judgment. Cleansing Flames slams a hammer into the ground to create a fiery AoE effect that deals constant fire damage to any enemy inside of it. Storm Dragon’s Judgment throws the hammer instead, imbuing it with a lightning effect. It sticks to wherever it lands and damages to nearby foes, but you can also recall the hammer if the situation calls for it.

Early tier passive abilities focus on increasing damage dealt by your character and your Wyvern. Later on, you get access to Blasthamut’s Favor, which summons a fire or lightning orb that homes in on enemies. The orb’s element changes depending on whether you kill enemies with your guns or melee attacks. The last passive tier lets the Fatemaker call down elemental bolts whenever you activate an action skill. 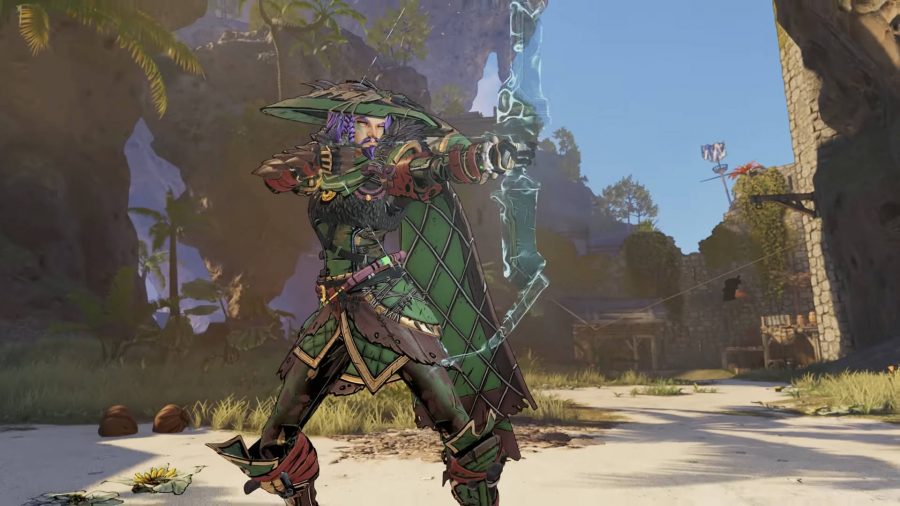 The Spore Warden is a fun guy to have in any party of adventurers. If you choose this class, you get a mushroom friend that deals poison to nearby enemies. Whenever you ping an enemy, this companion lunges towards them.

While your companion gets stuck into the fray, you are free to use your action skills: Blizzard and Barrage. Blizzard creates three cyclones that seek nearby enemies. Any foe caught in a cyclone takes frost damage. It’s a fairly basic skill and not one that scales well with the Spore Warden’s passives, but you can improve it if you choose the Brr-Zerker as a second class.

Barrage allows you to fire seven arrows at once from an ethereal bow, which you can ricochet twice between enemies. This deals damage for every hit, and benefits from any passive skill that increases gun damage. Barrage also has multiple charges between cooldowns so that you can fire multiple times.

In addition to many passive skills that bolster your Barrage ability, the Spore Warden has a few more unique skills worth investing in. Spore Cloud grants your companion the ability to taunt foes with a poisonous fart, ideal for crowd control. The Tier 6 perk gives any critical hit from a gun a chance for the shot to rebound up to two times, with any ricocheting gunshot dealing slightly reduced ability damage. The Spore Warden can turn into a damage-dealing machine when you combine this passive perk with the right guns. 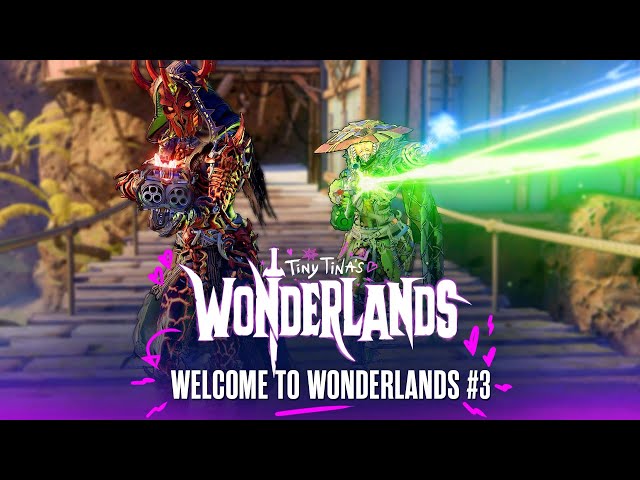 Graveborn are sort of like necromancers, but not exactly. You get a Demi-Lich friend helping you in battle by casting dark magic whenever you use an ability, but you won’t be resurrecting dead foes all over the place; instead, Graveborn Fatemakers’ magic draws power from damage you inflict onto enemies and to yourself.

Your action skills are Dire Sacrifice and Reaper of Bones. Dire Sacrifice sacrifices some of your health to inflict dark magic damage and the dark magic status effect on nearby foes. This scales with the total health you sacrifice, so the more overall HP you have, the more damage your enemies take.

Reaper of Bones fully heals you when cast; it also, grants you the ability to sap health from enemies and deal bonus dark damage for a short time. Having this skill enabled is particularly handy if you are about to die: instead of entering the ‘Save Your Soul’ mini-game, the Reaper of Bones effect ends, you become invulnerable for a short time, and you get back some of your health.

We highly recommend that you invest some early points into the Mortal Vessel passive skill as this will increase the damage you can do with Dire Sacrifice and keep you healthy by draining more health from your adversaries. Other passive abilities allow you to transfer fatal damage taken to the Lich instead, or add a chance to deal massive AoE damage on top of any spell damage you inflict. 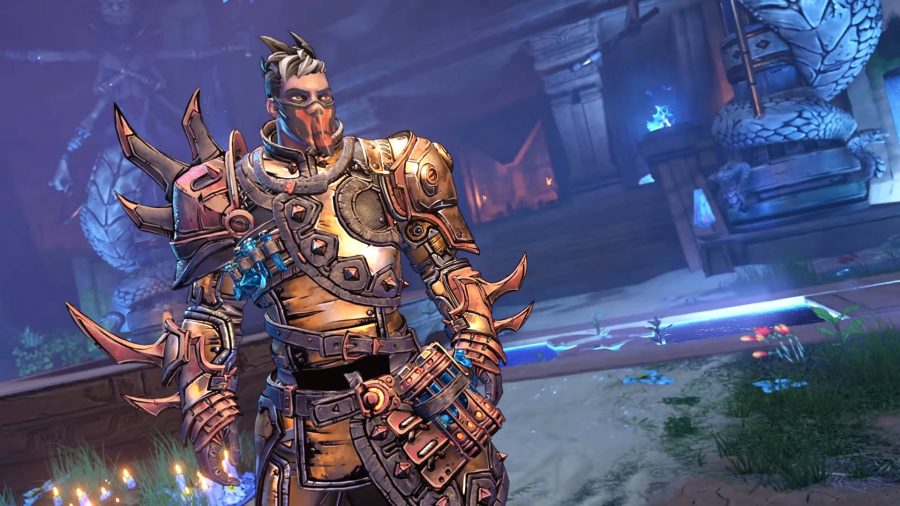 The Stabbomancer is a straightforward stealth melee class, with a class feat that gives you a flat increase to your critical hit chance. There are no special conditions to improve, leaving you more time to concentrate on everything else the Stabbomancer offers (stabbing, mostly).

With your available action skills, you can either hurl a spinning Ghost Blade that deals melee damage to enemies caught in its blades or hide from your foes with From the Shadows. The Ghost Blade’s damage is based on your equipped melee weapon, so you’ll need the best gear possible to benefit from this skill. You can also press the action skill button to move your Ghost Blade instantly at the cost of its remaining duration.

From the Shadows puts you into an invisible state and automatically deals any blow as a critical hit. The caveat here is that while you’re in this stealth mode, your critical hits deal reduced damage.

Your initial passives focus on damage and movement speed increases, but Potent Poisons adds to your status effect’s overall damage and duration, which makes it a potentially deadly option combined with other classes’s skills. Elusive allows you to sprint and shoot simultaneously, making the Stabbomancer the nimblest of all six Tiny Tina’s Wonderlands classes. The tier 6 passive skill really gets the party started; every time you crit with guns or spells, there’s a chance ethereal blades appear to impale your enemies, meaning damage can easily stack to ridiculous levels.