Depending on how loosely you define them, Assassin’s Creed Valhalla doesn’t really have traditional side quests. There are side activities, and lots of them, but not the kind of lengthy diversion from the main storyline that Assassin’s Creed players have normally encountered in Ubisoft’s quasi-historical open-world games. The reason? It’s because protagonist Eivor isn’t really a hero.

In an interview with Gamasutra, Valhalla narrative director Darby McDevitt and game director Eric Baptizat explained why Ubisoft discarded the side quest model for this Assassin’s Creed outing. It comes down to the fact that Eivor, as a Viking invader in England, is a different kind of character than Origins’ Bayek or Odyssey’s Kassandra or Alexios were.

“In most RPGs, the player embodies the role of a hero, usually someone who is native to the land they are exploring, and who has a positive role to play in this world – a hero, a mercenary, a sheriff, etc.,” the Ubisoft devs explain. “In Assassin’s Creed Valhalla, no such assumption can be made about our main character.”

The developers go on: “You play as Eivor, a Viking invader in England who only wishes to settle somewhere and make alliances to ensure the prosperity of their clan. So in the eyes of the majority population in England, you are the enemy, or deeply unwelcome at the very least.”

That means that to Eivor, the idea of doing ‘side quests’ is meaningless or absurd – your goal is to only to scrape out a settlement and survive, and thus can’t be concerned with the general well-being of the people around you, at least when they’re not part of your clan and actively contributing to the survival of Ravensthorpe. 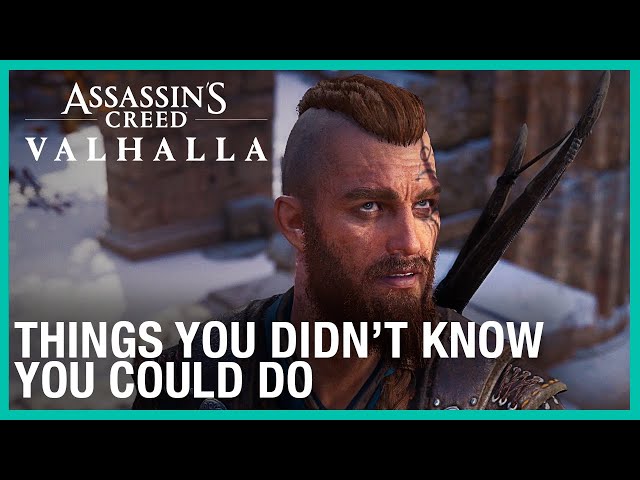 Once Eivor has established a base of operations in England, you can then travel out to the various neighboring shires, which the developers say have been built to be their own self-contained storylines. When you’re not actively advancing those narratives, you can search for collectibles, play some Orlog, or participate in ‘World Events.’

These are “small little narrative moments that engage the player’s attention immediately, but are not tracked,” the developers say. “If the player is not interested in the event, they can walk away and there will be nothing but a dot on the map to remind them that it exists.”