What if we told you that you can find that same pistol hidden away in one of the side jobs? Interested? Thought we got your attention! While you may not be able to reload this pistol in the stylish way that Johnny does, it still packs a big punch late in the game and is worth seeking out.

This guide will go over the steps to unlock this Cyberpunk 2077 iconic weapon, the stats for this powerful pistol, and even some other missable items that you come across in the same side job, including Johnny’s car and jacket. They’re worth going out of your way for and it’s not especially difficult to find once you know how. However, your opportunity to acquire it arrives relatively late in the game, so expect significant spoilers ahead for Johnny’s story.

How to get Johnny Silverhand’s pistol

You’ll need to get up to the side job ‘Chippin’ In” to be able to get Johnny’s pistol. To unlock it, you’ll first need to complete the side job ‘Tapeworm’, by talking to Johnny at various points in the main storyline. You’ll complete it during the main job ‘Search and Destroy’.

During the course of the mission, you’ll first get Johnny’s jacket from the boot of the green car. This is the first of the three Johnny related items you’ll get during this mission. After meeting with Rogue and Weyland at the Afterlife, head to the shipyard towards the northern end of Northside. There is a computer in the middle of this Maelstrom camp. Find the computer while evading/defeating enemies, depending on how you’ve configured your Cyberpunk 2077 builds up to this point, and you’ll find a message about Ebunike. Make your way up the staircase to the deck of the ship. Here you’ll find some guards and Grayson. 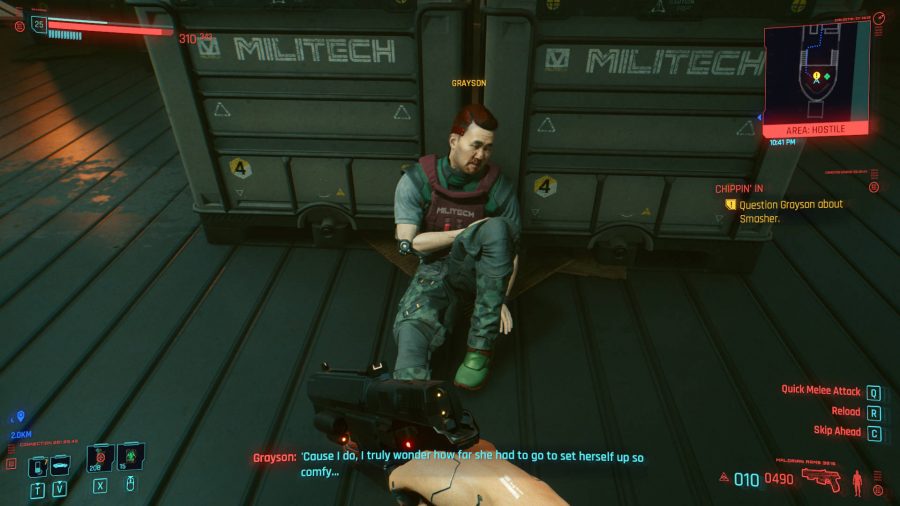 After defeating Grayson, you’ll swipe the Malorian Arms 3516 off him. This is Johnny’s pistol, and if we’re honest, it might just be the best pistol in the game!

As a side note, you’ll also be given a choice: whether Grayson lives to see another day, or dies where he kneels. If you spare Grayson, he’ll offer you a key that is used to drive Johnny’s Porsche, one of the best Cyberpunk 2077 vehicles. Press the control panel at the top of the ladder nearby and a shipping container will descend. Open it up and hop into Johnny’s Porsche to unlock it. This is the only time you can unlock it, so don’t miss out!

You’ll then need to drive to the next location close to the oil fields. This is Johnny’s grave and a lot is riding not only on what you decide Johnny’s epitaph should be, but also on your responses to Johnny throughout the game. If you’re friends with Johnny, and you choose “the guy who saved my life”, then you’ll unlock the side job ‘Blistering Love’ – its completion is vital for unlocking one of the Cyberpunk 2077 endings. 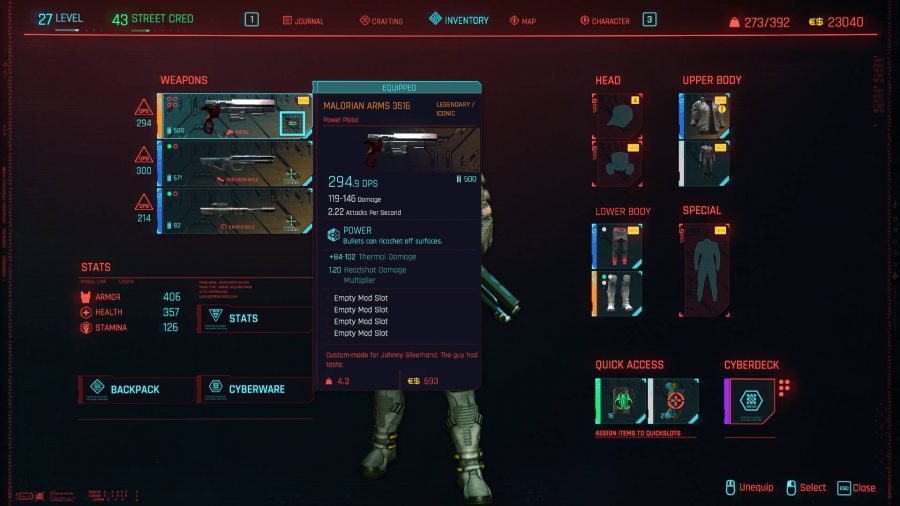 Johnny’s weapon is called the Malorian Arms 3516, and it’s the most powerful pistol in the game. It’s classified as a Power Pistol, meaning that it is just a standard pistol and that’s easy to use. Sometimes though, the bullets will emit flames, burning the target. Here’s the full breakdown on the stats: