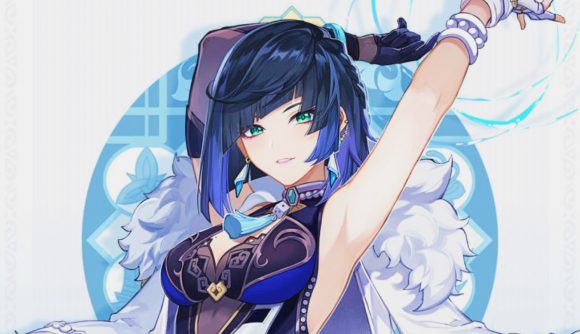 Developer Mihoyo has announced a Genshin Impact 2.7 delay, stating that the next big Genshin Impact 2.7 release date has been temporarily postponed. The delay is likely at least in part due to the recent COVID-19 lockdown in Shanghai where Mihoyo is based. This means players will have to wait a bit longer for the much anticipated new Genshin Impact characters Yelan and Kuki Shinobu, who are due to arrive in the version 2.7 update.

Fans of the open-world RPG were anticipating a May 11 release date for version 2.7, based on the regular six week development cycle that Genshin Impact updates have mostly stuck to in the past. However, this announcement almost certainly means that the update will be arriving a little later down the line. The official Genshin Impact Twitter account which announced the delay did not give a specific timeframe, but said Mihoyo “will provide the corresponding information to Travellers as soon as possible.”

Datamined information for Genshin Impact 2.7 means some of the key components of the update are already out there. Part of the 2.7 trailer has been leaked, though it doesn’t give away much new information. New character Yelan’s ascension materials are already likely known, so check out our guide if you want to use the extra time provided by the delay to prepare the things you need to level her up when she arrives.

Kuki Shinobu is expected to arrive on a Genshin Impact banner in the second half of the 2.7 update, which usually takes place three weeks after the first half releases, so it’s likely that she will also arrive later than planned in accordance with the delay.

In the meantime, we’ve got a tier list of the best characters in Genshin Impact 2.6 to keep you up to date, and be sure to check our Genshin Impact codes guide for free primogems and more.