Want to know about the Genshin Impact 2.7 release date? After being delayed a few weeks, we now know when the next patch is arriving, and we’ve got enough information to give you an overview of what’s coming up next. The devs at Hoyoverse have recently announced some new Genshin Impact characters, two of which are rumoured to join the open-world game in a few weeks.

Datamined beta information for Genshin Impact 2.7 update has been online for a while now, giving us a glimpse at the abilities of new faces Yelan and Kuki Shinobu. We also know what Yelan’s ascension materials are likely to be – check out our guide to gather everything you need ahead of time to level up her talents immediately.

Most of the leaks for Genshin Impact 2.7 focus on the new characters, with more information to come via the livestream. We’ve put together a guide on everything that’s being talked about currently, and we’ll update it as more details come to light. Here’s everything we know about the Genshin Impact 2.7 update.

The maintanence period is due to last around five hours, and Hoyoverse has even gone as far as to state that the 2.7 patch is due to run for the usual six weeks, with the Genshin Impact 2.8 release date now expected on July 13.

Don’t forget, until May 30 you can claim your free primogems as part of the 2.7 update delay compensation scheme announced by Hoyoverse in early may following the news.

According to known Genshin Impact leaker Lumie, Yelan and Kuki Shinobu could arrive on an upcoming Genshin Impact banner as part of the 2.7 update. Yelan is going to headline the first banner in 2.7, and Kuki Shinobu is rumoured to be joining Itto on a re-run banner in the second half of the update, which will launch three weeks after the first half.

We’ll likely find out for sure what the next Genshin Impact banners will be during the 2.7 livestream.

Dear Travelers,
The special program for #GenshinImpact's new version will be on the official Twitch >> 5/20 at 8AM (UTC-4)!
>>>https://t.co/iSfDaDRH9w

On May 5, Hoyoverse announced that it would be compensating players due to the delay of the 2.7 update. Starting on May 11, 400 free primogems will be sent to players at 04:00 AM server time every Wednesday. Players will also be sent one Fragile Resin, seven Hero’s Wit, 16 Mystic Enhancement Ore, and 120,000 Mora.

This compensation will continue until the 2.7 update is released. You have to hit Adventure Rank 5 by the time the first wave of compensation goes out in order to be elligable, and the free goodies will be sent via the in-game mail system. Each mail will expire after 30 days, and rewards can only be claimed before the 2.7 update lands. 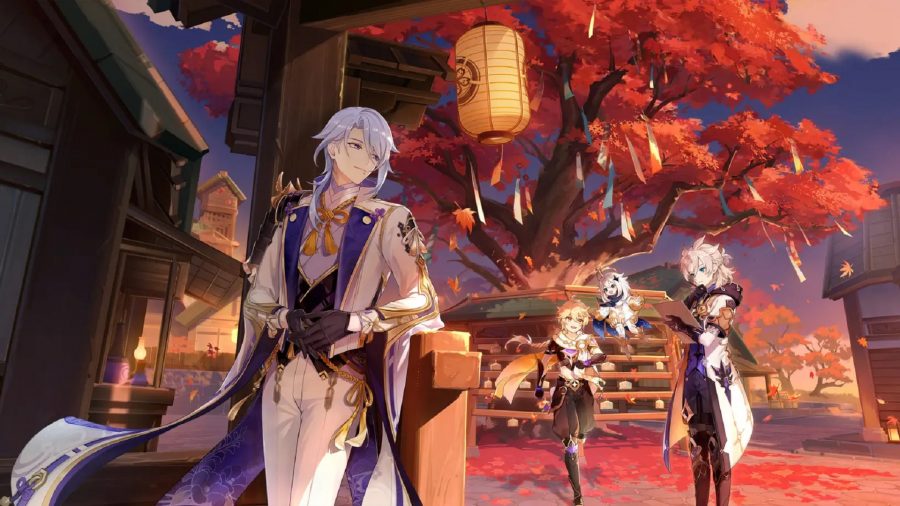 At the moment, the only rumour we have for new 2.7 events comes from Genshin_arab which points to new events set in The Chasm, the new area introduced in 2.6. One new event from the leak is called ‘A Muddy Bizarre Adventure’.​

Lumie has posted images taken from the 2.6 client of Ganyu firing Aqua Simulacra, a brand new five star bow. This bow is rumoured to be coming to the anime game in the 2.7 update.

*Videos and images were taken on 2.6 client pic.twitter.com/MmYLcjNrMM

There is also a suggestion that a new quality of life feature will be coming to 2.7 – the ability to search for achievements. This comes from Mia, and the text has been translated so take this with a pinch of salt.

That’s everything we know about Genshin Impact 2.7 so far. For more Genshin Impact tips, check out our guides to 2.6’s new area, The Chasm, including all of the Archaic stone locations and how to unlock the Chasm underground. One thing’s for sure, 2.7 is going to introduce more Genshin Impact codes, so keep an eye on that guide as well.