Looking for the best Genshin Impact Aloy build? As of Genshin Impact 2.2, Aloy can be unlocked for free regardless of what platform you play on. The only thing you need to do is reach Adventure Rank 20 – once you do, Aloy should appear in your in-game mail.

Aloy is a Cryo bow user who plays similarly to Yoimiya, which is potentially a positive thing depending on who you ask… at least she’s entirely free! The community’s expectations for Aloy aren’t high because she doesn’t seem like a traditional five-star character. Base stats usually separate five-star characters from four-star characters, but Aloy seems to be a five-star name only, similar to the Traveler.

Despite Aloy’s seemingly unimpressive stats, she is capable of stealing a spot in your party if you have the right equipment. Aloy’s area-of-effect elemental burst can be utilised by most teams thanks to its freezing effect, so it’s definitely worth giving her a try. Here’s everything you need to create the best Genshin Impact Aloy build.

Aloy struggles in the main DPS role due to her lengthy animations. Unless you carefully time your elemental skill and burst, Aloy can be damaged during her animations because she is unable to cancel them. As a result, Aloy’s best role is the sub DPS role as she can deal huge amounts of damage in short bursts. Equip the Sacrificial Bow to maximise your damage with Aloy – this bow has a 40% chance of resetting the cooldown on her elemental skill, allowing you to deal even more damage within a short timeframe.

The two-piece Gladiator’s Finale set increases Aloy’s damage stats by 18%, perfect for long distance shots with her bow. Combine this with the two-piece Blizzard Strayer set which bumps up her Cryo damage by 15%. By buffing both Cryo and normal damage, you won’t have to adjust your playstyle to get the most out of these artifact sets. 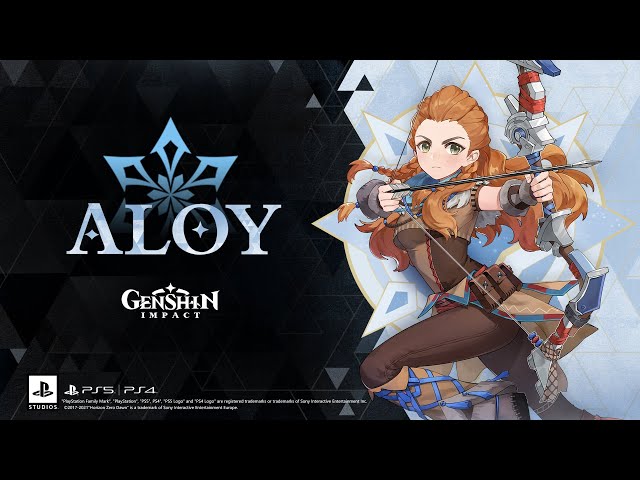 A great DPS partner to pair alongside Aloy is Kazuha as his abilities naturally synergise within her elemental skill. Frozen Wilds drops chillwater bomblets when the freeze bomb explodes – Kazuha can utilise this effect with his elemental skill as he gathers the bomblets and launches them towards enemies.

Not only is Xiangling a strong free-to-play character, she’s also capable of dealing a lot of damage through elemental reactions, making her and Aloy a deadly duo. Melt is one of the easiest reactions to trigger, especially with Aloy, as her abilities freeze enemies where they stand. Finally, you can avoid taking damage by pairing Aloy with a shield character like Zhongli to ensure she is protected while active on the battlefield.

With all of that, you should have everything you need to make the best Aloy build in Genshin Impact. Read our Genshin Impact fishing guide to find out where all of the best fish regularly hang out. If you find enough rare fish, you can earn yourself a rare polearm named The Catch. Looking to pair Aloy with a five-star character? Redeem these Genshin Impact codes to wish on the current banner.