When is the Genshin Impact Yae Miko banner release date? Yae Miko is an upcoming new Genshin Impact characters that will be playable in the game for the first time as of the next Genshin Impact banner. She should appear as you progress through the Inazuma storyline.

She’s the chief priest – the Guuji – of the Grand Narukami Shrine on Mt. Yougou, Narukami Island – the biggest shrine in Inazuma. In an official tweet from Mihoyo celebrating the 2020 New Year, it was revealed that  Ayaka was Yae’s first guest of the year at the shrine. Like the rest of Inazuma, it’s clear that Yae Miko is heavily inspired by Japan, as Miko means ‘shrine maiden’ in Japanese.

According to Mihoyo’s description of Yae Miko, “her elegant and beautiful appearance belies an intelligent and cunning personality. She is a lady who is not easy to predict and has her own principles and methods of doing things”. Players have been patiently waiting for the Yae Miko banner release date ever since she was first introduced, and we finally have a confirmed date for when she will be available.

The Yae Miko banner release date is February 16, 2022. This coincides with the version 2.5 release date and Yae Miko will feature as part of the very first banner. 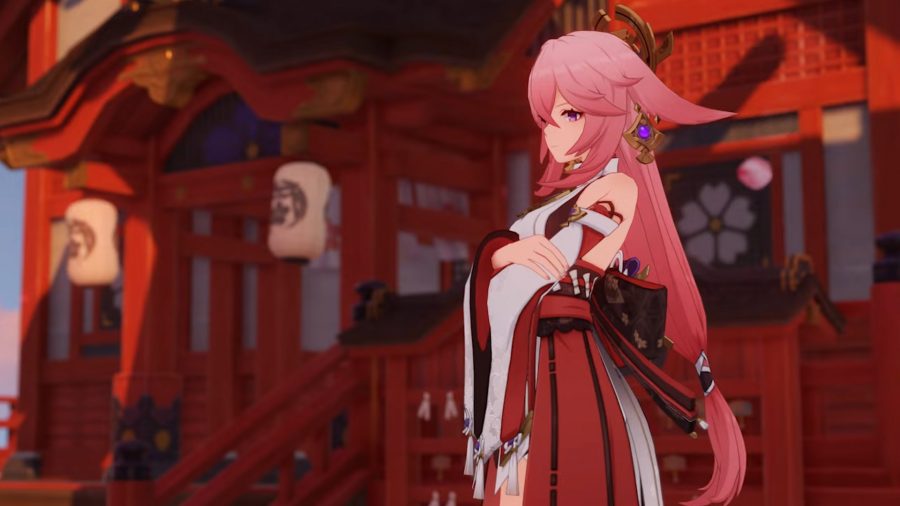 Beta testers report that Yae Miko is a five-star Electro Catalyst user. Her abilities, passive talents, and constellations are listed below, via Honey Hunter World. UBatcha recently posted the Yae Miko patch notes in the latest beta which drastically changes the power of her abilities – we’ve updated our guide to reflect these adjustments.

• Periodically strikes one nearby opponent with lightning, dealing Electro damage
• When there are other Sesshou Sakura nearby, their level will increase,  boosting the damage dealt by their attacks

A maximum of three Sesshou Sakura can exist simultaneously. The initial level of each sakura starts at one, the highest level each sakura can reach is three.

That’s everything we know about Yae Miko – we’ll keep you updated when more information is officially revealed. Until then, if you’re exploring Enkanomiya, we’ve got a guide to all the Genshin Impact Key Sigil locations, and how to obtain the Divine Bridle in Genshin Impact.